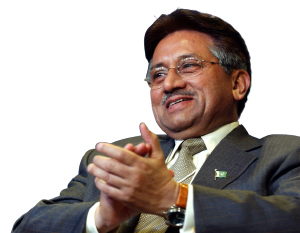 P akistan’s former Chief Executive and President, General Pervez Musharraf (born on 11 August 1943) is a Pakistani politician and a retired four-star general of the Pakistan Army. During his term of office as Chief Executive, Pervez Musharraf was aided by his self-chosen team of experts, who took various measures for the country’s economic revival, devolution of power, accountability, women’s empowerment and democratic consolidation. Despite his military credentials, Musharraf aimed at holding elections to form a civilian government. However, when most people seem to have a love-hate attitude towards Musharraf, there is a need to take a neutral view of his steps and reforms. People ask questions about his credentials as a patriotic, forward-looking leader, his shortcomings and his mixed legacy of economic development and political engineering.

The tenure of President Pervez Mushraf was an era of hope, expectations and accomplishments. GDP growth which was 3.9% in 1999 grew at an average rate of 6% per annum during the period from 2000-2007. This created an attractive place and expectations for private foreign investment. During eight years, Pakistan registered enormous growth in FDI which amounted to more than 13 billion US dollars. The economy was demonstrating a positive trend in all facets. The economy expanded at an average of 7% per annum during Musharraf's last four years.

The economy growth touched a record level of 9% in 2004-5, The exchange rate remained stable despite trade and current account deficits, clearly indicating strong inflows of external resources. Exchange reserves crossed the USD 16 billion mark. The banking sector was showing extremely positive trends. Major regional banks had shown their keenness to make their presence felt in Pakistan. Some of the leading banks of South East Asia were desperate to benefit from the boomlike situation in Pakistan and make Pakistan their base to do business with the neighbouring countries. Banks and institutions which traditionally were known for lagging behind demonstrated extraordinary performance. One example is the Agriculture Development Bank of Pakistan (ADBP) which ranked in the D category in 2001. It was restructured with the support of Asian Development Bank and with its new face with the name of Zarai Taraqiati Bank Limited (ZTBL), it shot up in performance and accomplishments. The result was that the bank in 2004 was rated as AAA. This indeed was a remarkable accomplishment of a bank which earlier was not known for its performance largely owing to poor management-labour relations. Within three to four years it moved from D category to AAA. Since then it is moving in this range of accomplishments.

In short the country showed that given the right leadership and appropriate development-oriented policies it has the potential to provide remarkable results for its people. These two requirements were provided by President Pervez Musharraf during his tenure.

To understand people’s love-hate attitude it is important to examine how Musharraf got into power. His reforms were robust and he underwent great pressures to get his bold measures going.

On October 12, 1999, while Musharraf was out of the country in Sri Lanka, Sharif dismissed him and tried to prevent the plane carrying Musharraf home, from landing at the Karachi airport. Sharif tried to hijack the plane but the armed forces securitized the COAS at all costs. The hijacking of his plane sets an ugly history in the politics of Pakistan. In response, General Musharraf declared an emergency in the country and the political government was dismissed. With that, he became the 10th President of Pakistan after the successful military takeover of the federal government. But what led to the differences between him and Sharif?
One of the significant differences was Prime Minister Sharif’s choice of Lt. General Ziauddin as the new COAS. That decision departed from tradition in a big way considering that no DG-ISI had ever become the army chief till then in Pakistan. \Lt. General Ziauddin belonged to the Corps of Engineers and was not from the fighting arms or the mainstream such as the infantry, armoured corps or artillery. To that extent he was a technocrat and did not belong to the army’s mainstream of general officers from among whom the future COAS is chosen. Perhaps Nawaz Sharif, after successful attempts at meddling with the military leadership, had developed the confidence to dismiss Pervez Musharraf. Earlier, he had managed the exit of the former COAS General Jehangir Karamat in October 1998, and later, of Chief of Naval Staff Admiral Fasih Bokhari, without any hiccups. So Sharif had probably hoped that this time too, sacking General Musharraf would go smoothly which, however, was not to be. Instead, the turn of events proved disastrous for the prime minister.

After suspending the constitution and dissolving parliament, Musharraf formed the National Security Council, made up of civilian and military appointees, to run Pakistan in the interim setup. President Musharraf had both good and bad attributes. One of his best attributes is that he is a born leader, knows his job very well and has the capability to choose the right man for the right job to run affairs. His team members mentioned that he was a great listener and then he made decisions at his best judgment.

His term of office was not a smooth ride but was full of rollercoaster moves. Post-9/11, America was in a rage. In that crippling environment, Pakistan was not in a position to stand against the US rage. Hence on September 12, the U.S. deputy secretary of state, Richard Armitage, in a “hard-hitting conversation,” asked that Pakistan had to make a choice — “you are either 100 percent with us or 100 percent against us — there is no gray area.” So Musharraf decided to join the War on Terror against the Taliban and stand with the US. Well, it was not only US pressure but the Indian strategic position too. India was denied supporting the US in the War on Terror though Indian Prime Minister Vajpayee offered basses to the US to counter terrorist bases in Pakistan. That Indian move was not in the best interest of Pakistan. Hence, Musharraf’s decision to join the War on Terror was justified.

During his term of office, Musharraf’s contribution to the economic sector was marvellous. The economy grew at an average rate of 6.3% a year. In the eight years since the takeover by the military, the size of the economy increased by almost 50% and that of income per head of the population by nearly 25%. The country’s debt burden was reduced to one-half. But how did it happen?
Musharraf brought an excellent combination of good technocrats and the finest bureaucrats to address economic challenges. He took some bold measures such as:

1. The economy took time to pick up under General Musharraf. It was only after three years that it began to expand and income per capita started to increase. The economy was deliberately kept in check by the decision to follow the IMF’s model of stabilisation.

2. Once the economy shrugged off the constraints placed on it, it went on to a higher trajectory of growth on which it remained for five years.

3. Over the entire period, GDP per capita increased at nearly twice the rate of growth of the population. This should have had a profound impact on the incidence of poverty. But that did not happen.

4. Large foreign direct investments into the country were opened up such as food and beverage companies like Pepsi Cola and MacDonald’s, etc. opened up across the country.

5. There has also been significant investment in mobile telephony by operators from the Middle East and China.

6. Highest FDI came in – which led to over eight and a half billion inflows in foreign private investment.

With all these measures, the country’s debt burden was reduced to one-half and Pakistan was able to prepay an expensive Asian Development Bank loan amounting to over a billion dollars before time. Ultimately the economy was stabilised and under Musharraf’s leadership, Pakistan, by December 2004, came out of the IMF program and remained out until 2008.

Musharraf’s contribution towards women’s empowerment is unmatched. He not only stood for women’s right to education and jobs but introduced a legal framework to support his decisions. After the 1999 coup, a number of factors, including international perceptions of Pakistan, brought women’s rights, greatly curtailed by General Zia-ul-Haq’s Islamization project, to the fore. Most critical among the changes to women’s rights during this period was the 2006 revision of the Hudood Laws, resulting in the Protection of Women Act. It was General Musharraf who set the foundation to appoint females in the armed forces of Pakistan other than medical staff. Today we can see women in all walks of life from hi-tech industries to sports, from education to construction, from personal businesses to leading multinational corporations, from medicine to media, from sitting in the parliament to addressing policies concerning national security.

Those who criticize General Musharraf’s policies need to see how the international institutions like the IMF stated in their December 2008 report that ‘from the early 2000s to mid 2007, Pakistan’s macroeconomic performance was robust, real GDP growth average was 5% with relative apprise stability the improved macroeconomic performance enabled the country to enter international capital markets in the mid-2000s. The outcome of Musharraf’s women empowerment policies can be seen in the form of Pakistan achieving the UN mandate of 15% female peacekeepers staff in the UN mission zone. The credit goes to General Musharraf’s vision to empower women - it is helping both the country’s economic well-being and utilization of women’s capabilities in all sectors of the government.