Collective efforts are required to address the wildfire issue. 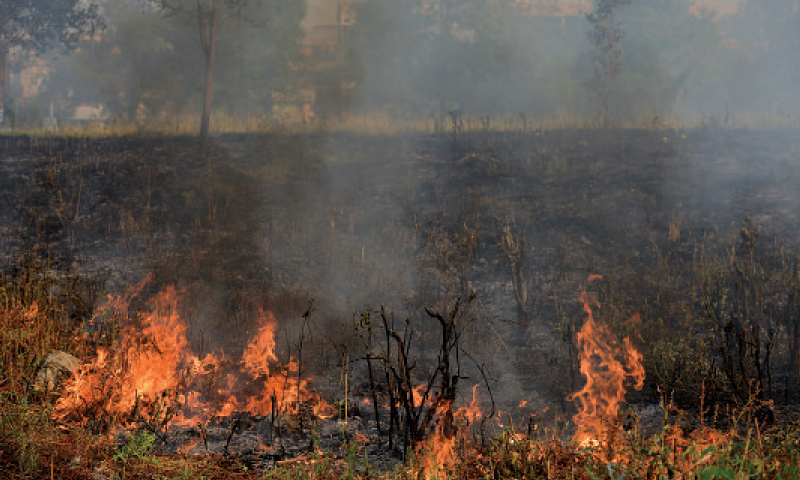 Every year, three months that fall in the middle of summer are very hot with an average temperature rising above forty-degree centigrade. Also referred to as drought-hit months, May, June and July are also the months known for severe heat waves. Fire erupts in the forests during these months while the instances of fire incidents in and around Pakistan's capital Islamabad rise sharply, as revealed by field survey statistics of the Capital Development Authority (CDA), Islamabad. From  June 15, 2005 to July 12, 2018, according to CDA statistics, a total number of 299 fires were recorded in the Margalla Hills, located in Islamabad Capital Territory.

This year, however, the number of wildfire instances were quite high and intense, as compared to the past, largely owing to the drought-like conditions coupled with high temperatures. Spread over 31,000 acres, the Margalla Hills National Park witnesses several fire incidents every year during summer in particular, adversely affecting both trees and animals. During the current season, several major fires broke out in the Saidpur range and Chinari area. This year, fire erupted at the National University of Sciences and Technology (NUST) in Sector H-12 in Islamabad, for the first time. The other fire incidents were reported in Talhar Village, Srinagar Highway and Kashmir Chowk.

With a detrimental impact on the environment, forest fires are harmful to property and human life as well as endanger the ecosystem. In general, there has been a growing increase in the amount and intensity of forest fires across the world over the last decade. However, in Pakistan, it is exceptionally high and serious. This phenomenon raises public concern about the environmental and socio-economic impacts of forest fires.

While the researchers are figuring out the root cause of such incidents and recommending various preventive measures, the policymakers rarely come forward when it comes to formulating effectives measures to avert such incidents. The government with its limited resources is also making its best efforts, but to no avail so far.

The CDA and the IWMB (Islamabad Wildlife Management Board) make routine announcements every year to deploy forest guards for patrolling to prevent fire incidents, giving firefighting jobs to the villagers during the fire season. There are reports that those who could not get employment deliberately set the forests on fire.

Taking notice of the forest fire in the capital, Prime Minister Shehbaz Sharif directed city managers to take emergency measures. The prime minister stressed immediate steps to evacuate people from the affected area. He directed the mobilization of the fire brigade on an urgent basis to extinguish the fire. He also urged the Ministry of Climate Change to present a comprehensive strategy to prevent such incidents in Islamabad and Margalla Hills in the future.

Meanwhile, Minister for Climate Change Sherry Rehman also took to her Twitter handle to respond to the fire incident. She wrote that fires are being fought all over the Margalla by the CDA and the IWMB on several sites including the NUST. The National Disaster Management Authority (NDMA) sent the helicopters of the Pakistan Army to control the fire while the rest of the agencies carried out operations on the ground.

Wildfires pose a significant danger and a serious challenge to the environment. Many variables, such as weather conditions and human activities, fuel characteristics of fire management activities, and changes in land use and climate, affect fire behaviors. Climate change is considered a key factor attributable to forest fires.

Many forests in Pakistan have a low forest road network and therefore, it is difficult to reach the whole forest area. Generally, wildfires happen in less-populated areas and at a long distance from public roads, but some anthropogenic behaviors instigate fire spread. In practice, RS and GIS are useful techniques for exploring forest fires and their spread. Using various meteorological models to evaluate the impact of weather on forest regions and the influence of urban heat should be further investigated and researched.

Fires have a direct impact on our social and economic life. It is vital to address this issue on an emergency basis. The researchers and scholars are carrying out research and policymakers are formulating appropriate measures. The government is also playing its part to overcome such issues. In this regard, the general public is also urged to play their part and take all precautions to avoid such a crisis.

Prof. Engr. Zamir Ahmed Awan is a Sinologist (ex-Diplomat), Editor, Non-Resident Fellow of CCG (Center for China and Globalization), National University of Sciences and Technology (NUST), Islamabad. He can be reached at awanzamir@yahoo.com