Writing on the Wall

Is Pakistan headed towards further chaos? The coming times are pregnant with possibilities. 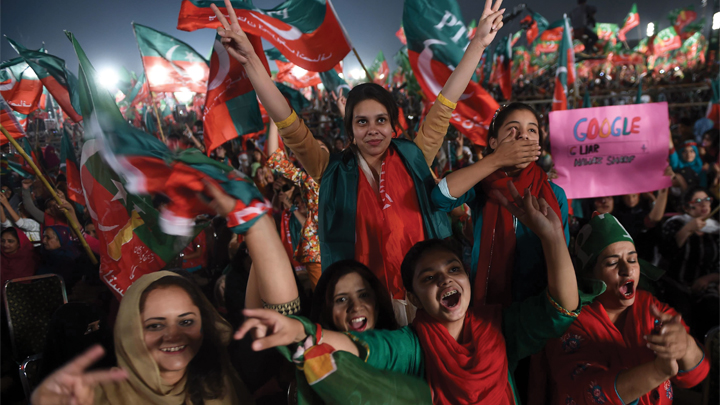 April 10, 2022 - a date to be remembered in the political history of Pakistan. It has changed various perceptions and people’s perspectives about state institutions. After a long blame game, raising controversial stories and unveiling state institutions, Imran Khan met the same fate of leaving the government. It was an unprecedented move when, for the first time in the political history of Pakistan, Prime Minister Imran Khan was ousted from power after losing a no-confidence vote. To date, not a single prime minister has ever completed a full five-year parliamentary tenure in Pakistan.

However, he seems to have left behind a cult following that mostly comprises youth and educated people. For them, Imran Khan alone has created a legacy of resistance and defiance against the powers that be, whether local or international. If this is true, how will this mass perception impact the future course of action in Pakistan’s politics? Will this popular opinion have a make-or-break impact on general elections? Will it redefine the limits of the functioning of the Judiciary, the Parliament, the Establishment, Administration and Media? Will it bring coherence or chaos?

To answer all of these questions, it is important to reflect on the political term of the Imran Khan government. He is a popular leader but due to his misgovernance and bad economic management, he was losing his popularity. Sustained policies were required to overcome the financial burden of the state and drag it out of economic insecurity but with frequent changes, it was not possible. One cannot deny the fact that the state faced issues related to the pandemic. Though the pandemic was handled well, economic challenges associated with it were poorly managed. Imran required potential and suitable manpower to deal with the issues skillfully but he failed.

Another serious blunder was his team going into the IMF program. The conditions of the IMF program were the harshest ever in the history of Pakistan, especially it had a fragile economy. The PKR experienced a free fall, interest rates skyrocketed, utility prices shot up, and life became unaffordable and painful. As a result, Imran’s popularity nose-dived. People were disappointed in his policies and weak government. Overall, he failed to keep his promises of punishing the corrupt that happened to be his pre-election mantra. But he lost the local bodies election in KP and was bound to lose the next general election.


Unfortunately, the way he was dethroned was ill-planned, badly executed and enforced with chaos and it exposed several institutions. The ordinary people did not like the way he was dethroned. It has been reflected ever since through the outburst of his political gatherings, not only within the country but across the globe. All the institutions exposed themselves as if they were in a hurry while meeting a last-minute deadline provided by some powers. This raises eyebrows and potentially is one of the core reasons behind the masses’ unity against state institutions and their functioning mechanism. The perception among the masses is that the institutions all ganged up to throw down the Imran Khan government. This is a general perception that is now deeply ingrained in the mind of the public. This perception is so deep-rooted that any propaganda against Imran khan or any amount of clarification from the institutions may not change the mind of the people, both within and outside the country.

President Dr Arif Alvi dissolved the National Assembly on Prime Minister Imran Khan’s advice and before that Deputy Speaker Qasim Shah Suri dismissed the no-trust motion, terming it a violation of Article 5 of the Constitution. But neither the Deputy Speaker ruling under Article 5 was investigated or considered by the Supreme Court, nor the President’s reference to explain Article 63 (a). Open horse-trading was taking place but the Supreme Court failed to take any suo moto against those accusations. These were the root causes of the issue highlighted by the ruling government of the time. The Supreme Court did not investigate the root causes but ordered the vote of no confidence to be held, that led to the dismissal of Imran Khan’s government. The second problem is the way courts were opened at midnight against Khan and his team. This raised several questions among the masses which remain unaddressed. Overall, in this scenario, several unprecedented acts occurred that raised questions about the credibility of the state institutions.

Luckily, Khan was not put behind the bars but if that had happened, it would have been a disaster for the state institutions and Khan would have turned out to be a mega favourite leader among the masses. Sheikh Mujeeb was put behind bars in the Agartala conspiracy case. When Mujib and his friends were arrested and put into jai, no Bengali came out in support of Mujib. Within one year when the movement against Ayub Khan started gaining momentum, the pressure of his associates’ release also started gathering momentum. The then government had no option but to release him and thus Mujib became a hero and later the founder of Bangladesh. There is no doubt that Sheikh Mujib gave his blessings to the Agartala conspiracy and this has been openly acknowledged by his daughter, Sheikh Hasina.

With such hostile measures against Imran Khan, a strong wedge has been created between the state institutions and the masses. But who created this wedge? Is it the PTI or state institutions’ desperate actions? Haste in taking decisions has ruined the entire situation. All those who were unhappy with Imran Khan’s poor governance stood with him firmly for the uplift of their motherland. Looks like the masses are fully charged against the evils of the state. By dissolving the government so brutally, Khan has become a hero among the masses. Today, ordinary people consider him a victim of political/institutional rivalry. They held accountable all institutions such as the Judiciary, Election Commission, Establishment and Media houses in a conspiracy against Khan. People believe all these institutions were in cahoots with each other against Khan. So is it the PTI losing its government or is it the institutions of Pakistan losing their morals and integrity?

Pakistan being a nuclear power cannot afford this wedge. If we want coherence then the damage should be controlled on an emergency basis, otherwise the chaos will spread like wildfire and foreign instigators will take advantage.

Rapid healing of the wedge between the masses and institutions is required on a priority basis. Early elections are to be called but if the elections are manipulated the outcome will be frightening. Therefore, free, fair and transparent elections are needed to protect the country from chaos.

3 thoughts on “Writing on the Wall”