WRITING ON THE WALL

The need for new leaders and new political parties is a reality. 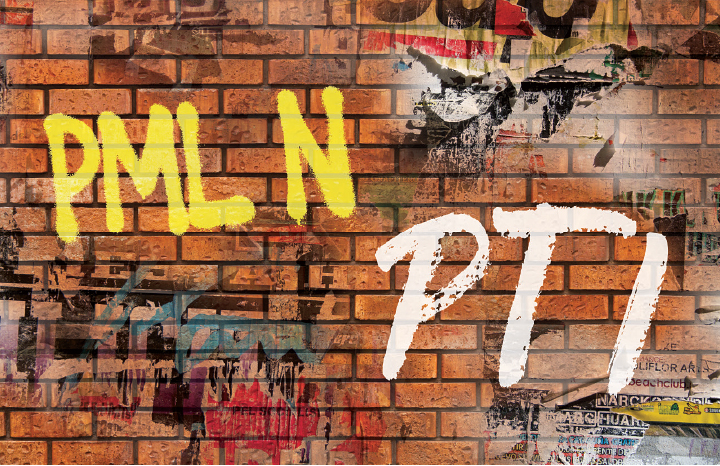 Despite having alleged 'massive backing' of the Khalai Makhlooq, being the ruling party at the federal and provincial levels, having support of a subservient police and administration, and of powerful sections of the media, and who also had an unflinching support of 12 large and small parties and powerful local factional leaders, the Pakistan Muslim League-Nawaz could win only four of the twenty provincial seats in the by-elections held in Punjab on July 17, 2022. It was indeed an extremely humiliating defeat for the PML-N because Punjab is considered a citadel of the PML-N since the 1980s. The defeat becomes even more alarming when the winner - Pakistan Tehreek-e-Insaf had contested the election on its own and at a time when every established institution of the country and the Punjab was actively working against it.

This has triggered a debate about the future of the PML-N. Some political analysts think it is the beginning of the end of the fiefdom of the Sharif’s in Punjab and Pakistan. To some the PML-N’s historic defeat is a temporary setback. However, it is also likely that suggestions will be made to the party leadership to undergo a thorough soul-searching.

Let’s consider some empirical facts before reaching a plausible conclusion. Are the results of 17th July by-elections sufficient to predict the future of the PML-N? In my opinion, it sounds a bit too much to rely just on that. However, a comparative analysis of the election results of 2018 and the by-elections could be useful. In 2018, the PML-N had contested elections on its own. It had contested elections only on 15 of the 20 seats of by-elections. It won just one seat, lost four seats to independents and 10 to PTI. This party contested all the 20 seats and lost seven to independents and one to PMLN. Both the PML-N and PTI contested the elections under a caretaker set-up.

On the other hand, as stated in the foregoing, the PML-N contested the recent by-elections at a time when it was in power and all members of the ruling coalition plus the 2018 (20) independents jointly contested the by-elections. Regarding outcome of the by-elections., as for seats, one could argue that the PML-N gained three more seats than in 2018. However, if you compare it with their combined seats, the share of the coalition plus independents has declined massively from 11 to four seats. Regarding the share in votes, in the 2018 election, their combined vote bank was 1,057,052; in the by-elections it was reduced to 883,185 – almost a 10% drop. It seems unlikely that the PDM member parties plus the affiliated independents will not contest the next general elections jointly. If this happens, the PML-N vote bank is likely to drop further.

The margin of the PML-N’s defeat has deepened since 2018. For instance, PTI’s margin of victory has increased from 8% in 2018 to 14% in 2022. Moreover, interestingly, Lahoris showed little interest in voting on 17th July, as the average turnout in the four constituencies of the city was 34.7%, while in the rest of the constituencies it was as high as 53% on an average.

Let’s now examine the causes of the PML-N’s defeat. Broadly, political analysts cited the following factors. 1. ‘Unwillingness of PMLN in using modern methods (social media) of campaigning.’ 2. Instead of fielding tested candidates, the PML-N preferred turncoats, which caused annoyance and low turnout of PML-N voters. 3. Extremely poor performance of the PML-N government and steep increase in prices of essential commodities since April.


While I am reluctant to undermine the impact of these factors, it is worth considering the impact of the unflinching support of state officials, including election authorities, for PML-N candidates. This gave a false sense of confidence to PML-N stalwarts. They perhaps thought that the use of money, coercive power of the state machinery and appointment of compliant polling staff would deliver victory. That didn’t happen.

Well-prepared, extremely vigilant, and highly motivated youth had full support of leaders of PTI. This frustrated the PMLN’s interfering strategy. Imran Khan’s unmatched display of energy and endurance during extreme weather energized PTI workers deeply. That attracted huge crowds in jalsas, and it had a cascading impact on the voters, which caused a high turnout.

In order to assess the quality of conduct of elections, PATTAN, with which I am associated, conducted a survey in 17 of the 20 constituencies from July 15 to 17.

Our data showed the following key findings: Unprecedented enthusiasm for polling, more loyalty with parties/leaders than biradri and faction, performance of contesting parties, diminishing generational divide within households regarding choice of parties, doubts about the neutrality of election staff and administration, and fear of rigging.

Our survey also showed that as high as 82% of the respondents said that all the registered voters of their families would vote for the same party. Only 6% respondents said there was a split within their families regarding choice of candidates. The survey, however, appeared to indicate, though slightly, that it was in fact the elders who had moved closer to the youth.

The PATTAN survey also revealed the practice of vote-buying. Among those who said they knew about vote buying, 80% pointed at PMLN candidates, while 7% blamed PTI and 10% named both parties. A significant percentage (18%) of respondents reported that one of their family member’s vote was shifted to another area. According to our exit poll, 47% respondents were likely to vote for PTI and 34% for PML-N. It was the same in case of PTI. However, according to the ECP results, the PML-N received 39% of the total votes. The five percent difference between our exit poll findings and ECP results could be attributed to rigging. In short, while the vote bank of PML-N was found to be diminishing since 2018, PTI’s popularity had gone up.

Two factors appear to be responsible for this shift. PML-N continued to rely heavily on local factional and biradri leaders – primordial social networks. On the other hand, the PTI leadership directly connected with party activists through local chapters and social media. The fight between the PML-N and PTI is a battle between two ideas – a decadent one and an enlightened one.
This nursery rhyme explains all the great historical falls so well.

Historians and sociologists have been trying to understand the rise and fall of empires for centuries. Though they don’t agree that there is a single factor that causes change, and rightly so but internal contradictions and subsequent decay have often been cited as a major reason.

Allama Iqbal’s famous line is, ‘change is the only constant in life.’ The Marxian theory of contradictions that is based on historical materialism and dialectics could help understand the beginning of the downfall of the PML-N and other parties. Pakistan Peoples’ Party was once the most popular party in Punjab. Even Zia’s ruthless dictatorship could not damage its popularity, but as new social forces emerged, they articulated their opinions in an organised manner, and claimed their space. The need for new parties and leaderships became a reality. Consider the rise of the Green Parties in the West, the fall of the Indian National Congress and the ensuing rise of the BJP in India. Though it is too early to predict complete annihilation of the PML-N and complete victory of PTI in Punjab, it appears that the PML-N’s downslide is written on the wall. ‘All the King’s horses and all the King’s men may not be able to put Humpty together again.

The outcome of the Punjab by-elections has changed the course of the country’s politics. The PTI’s triumph has cleared the way for the party to regain control of the country’s most powerful province, leaving the fate of the PML-N-led government at the centre hanging in the balance.

t has certainly been a resounding poll victory for a party which was ousted from power just a few months ago. Most astonishing is the scale of the PTI’s success. The humiliation suffered by the PML-N reflects the shifting political sands in the country’s heartland.

While Imran Khan’s aggressive campaign and his populist politics may have helped galvanise his voters, there were several other factors that contributed to the result. The overthrow of his government before the end of its tenure made a political martyr out of him. Unlike previous ousted leaders Imran Khan fought back with a ferociousness never seen before.

True, the PML-N is still a formidable political force in the province but the latest by-elections have exposed its vulnerability. The social and economic changes that have occurred over the years have also impacted the politics of Punjab more than anywhere else. The province that comprises over half the country’s population is experiencing one of the fastest processes of urbanisation anywhere. That was also reflected in these by-elections, with the PTI gaining ground across the urban-rural divide.

The large turnout of voters, rarely seen in by-elections, demonstrates that the PTI was able bring out young voters, making the difference. While the PTI appeared better organised, the PML-N was riven by internal feuds. Predominantly a family enterprise, the party miserably failed to meet the aspirations of the young generation of voters looking for change.

With the critical by-elections over, a new round of the power game has begun that is likely to be more vicious.