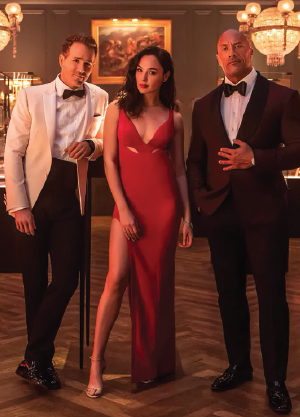 Red Notice is an American action comedy film that revolves around two notorious art thieves’ struggle for stealing Cleopatra’s three bejewelled eggs, pieces of art that Mark Antony presented to his wife Cleopatra as a wedding gift in 20th BC. The thieves: Booth (Ryan Reynolds) and Bishop (Gal Gadot) have different motives behind the steal. Booth does it to establish himself as the best art thief in the world, while Bishop goes for money as she has been offered 300 million dollars by an Egyptian billionaire who wants to give a gift to his daughter, Cleopatra, for her wedding. The film has this name because Red Notice is the highest level of an arrest warrant issued by the Interpol and is ‘reserved for the world’s most wanted criminals’.

At its start, the movie gives a brief account of the origin of the eggs and tells how they remained a myth until a farmer found two of them in Egypt in 1907. However, the third was still a mystery. Soon after this, the film shows Booth on a mission to steal one egg, which is on display in Rome. Tipped off by Bishop, John Hartley and Interpol agent inspector Das and their team rush to the museum to prevent the theft and arrest Booth. By the time they get there, Booth has already replaced the original egg with a fake one. But the museum’s administration refuses to accept that the egg has been stolen until Hartley proves it. 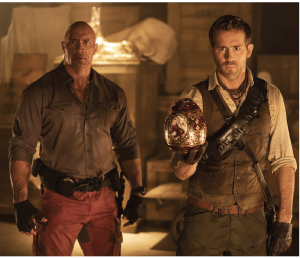 Das orders all exits to be closed immediately. Meanwhile, Hartley catches sight of him. A chase ensues, leading to bedlam in the museum. However, after much struggle, Booth successfully makes out with the precious artefact. After reaching home in Bali, Booth finds out that Hartley and inspector Das are already there. Das takes the egg, arrests him, and sends him to a remote prison in Russia, where Hartley also ends up as he is alleged to have assisted Bishop in stealing the egg.

Hartley, wanting to avenge Bishop by arresting her, convinces Booth to work as a team to break the prison. Booth feels awkward in teamwork but he agrees. They, in a marriage of convenience, break the prison and rush to London, where they attempt to break into the high security vault of Sotto Voce to steal the second egg. However, Bishop once again beats them, as she successfully seduces Sotto Voce and later double-crosses him, and gets the egg.

Bishop gets the first two eggs easily. But the third one is going to give her a run for the money because no one except Booth knows where the third egg is. Who will get the third egg? Will Booth become the best art thief in the world? Does Bishop get all three eggs and get all the money? Does Hartley succeed in taking revenge from Bishop? The answers to all these questions can be found in the film.

Almost everything about the film is amazing: the plot as well as its sequence is excellent; the cast is good; acting appears natural, though tinged with comedy. The action scenes are spectacular. The scenes of Booth’s escape in Italy, and his collaboration with Hartley to break the jail in Russia are truly breathtaking. The execution of plans to break into Sotto Voce’s high security vault is also astonishing.