Reflecting Ideals of a Diverse People

It is really commendable that a re-recorded version of Pakistan’s national anthem has been launched. The re-recording involved selected musicians of the army, air force and navy bands. There was a great feeling of national pride when the re-recorded version was released on August 14 at a ceremony in Islamabad, presided over by Prime Minister Shahbaz Sharif.

It was uplifting to see that the re-recorded version of the national anthem reflected inclusivity in voices and expression, while ensuring the sanctity of the original words and the musical composition.

The Ministry of Information and Broadcasting and the Inter-Services Public Relations (ISPR) synchronised and harmonised the re-recording of the anthem through the best possible musicians, serving in the armed forces brass bands. A Steering Committee, under the chairmanship of Senator (R) Javed Jabbar supervised the entire re-recording process.

Musicians from the army, air force and navy bands skilfully played the musical instruments; along with a choir of 30 vocalists from the National Academy of Performing Arts (NAPA), and over 125 vocalists, representing all provinces, regions and faiths.
The prominent singers in the re-recording included; Fariha Parvez, Sahir Ali Bagga, Ahmed Jehanzeb, Zeb Bangash, Fakhir, Arif Lohar, Bilal Saeed, Gohar Mumtaz, Umair Jaswal and many others. 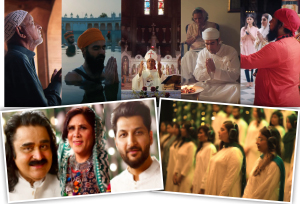 It was important for the re-recording to be done correctly, while maintaining the historic sanctity and rich legacy of the national anthem.

No compromises were made and state-of-the-art digital technology was used to record the multiple tracks and to render the mixing and fusion with the purpose of creating clear, distinct powerful vocal and instrumental versions.

The aim behind the re-recording was the same as before: bringing together the rich diversity of the nation in order to express the distinctive national identity and cohesion of the citizens of Pakistan.

The original stirring musical score of the national anthem was rendered by Ahmed Chagla in 1948 and was approved by Prime Minister Liaquat Ali Khan in 1949. The beautiful and inspiring words of the anthem were added by poet Abdul Hafeez Jalandhari in 1954.

The national anthem has also been depicted in a new colourful, kaleidoscopic video portraying the diversity and splendour of Pakistan’s land and people. The re-recorded national anthem is a truly participative and collective celebration.

Commenting on the massive re-recording effort, Senator (r) Javed Jabbar wrote in an article titled ’80 Seconds’, published on August 6 in Daw, “Eighty seconds become a nanosecond of the approximately 2.365 billion seconds which clock our 75-year history.

“Yet these 80 seconds are timeless, priceless. They survived tumult and turmoil, the wrenching separation of East Pakistan, the agony of multiple failures and injustices. These 80 seconds celebrate our survival against formidable odds, our joys and triumphs. They empower us to retain faith in the future. As we listen to and view the new audio and visual presentations one is confident the next 75 years will bring Pakistan closer to the vision and glory which our national anthem vividly evokes.”