Quest for a Chief

Appointment of a new army chief is a matter that seems to concern every Pakistani. This needs to change. 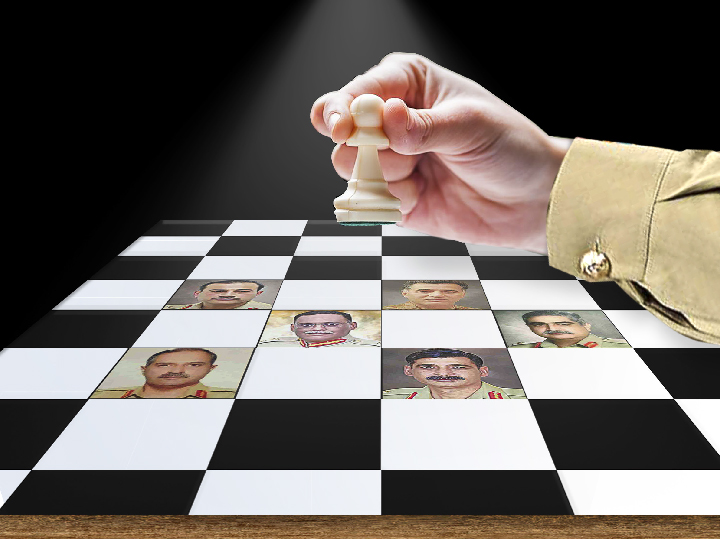 Who will be Pakistan’s next army chef? This is a question that is being frequently asked these days as the retirement date of the current Amy Chief (November 29) draws near.

It is interesting that no one bothers about the retirement of other service chiefs, namely the Navy or Air Force and most people do not ask who the next navy or air force chief will be. In fact, the chiefs of these services are appointed in due course and, apparently, on seniority basis. All that one gets is a small piece of news in the media, that a new naval or air force chief has taken office. The usual biographical sketch and a photograph accompany the news story.

In the Pakistan armed forces, chiefs of all the three services are equal in rank and are four star generals. A four-star general heads the army, while the navy and air force are headed by an admiral (four stars) and air chief marshal (four stars), respectively.

The Chairman Joint Chiefs of Staff (CJCS) is also of the rank of a four-star general. The post of CJCSC was created by Prime Minister Zulfikar Ali Bhutto in March 1976. The first Chairman was a four star rank officer, General Muhammad Shariff.

As the title implies, the rank should normally be held in rotation by four-star officers of the three services. However, except for Admiral Muhammed Sharif, Admiral Iftikhar Sirohey and Air Chief Marshal Feroz Khan, the Joint Chiefs of Staff Committee has always been headed by four-star generals of the army. The current holder of the office is General Nadeem Raza who was appointed in 2019.

Why is the appointment of a new army chief always of interest to Pakistani politicians, media and the public at large? A good reason could be that the Pakistan Army had always been involved in the political affairs of Pakistan while the navy and air force (apparently) stayed away from such involvement.

It was General Ayub Khan, the third Commander-in-Chief of the Pakistan Army, who imposed Martial Law in the country in 1958 and took the running of the nation’s poetical affairs into his own hands.

Gen. Ayub ruled for more than 10 years and then handed over affairs to his Army Chief, General Yahya Khan. Though Pakistan was dismembered in 1971 during this general’s time, but he at least enacted what were said to be ‘fair’ elections. It was obvious that it was the involvement of the army that made the elections possible.

Fast forward to 1977. Gen. Ziayul Haq was the army chief by then,. Though the country was beint ruled by civilian Prime Minister Zulfiqar Ali Bhutto, he was accused or rigging his re-election, the Islamist elements got the better of him and forced Gen. Zia to impose Martial Law.

The army was again in charge of the country’s affairs and the source of power that Pakistan’s politicians had to take into consideration to become power-mongers.


Gen. Zia was killed in an air crash in 1987 and in 1988 Benazir Bhutto took over as Prime Minister. She and Nawaz Sharif then came to play musical chairs until 1999, in what is infamously described as the ‘lost’ decade. This year, on October 12, Army Chief Gen. Pervez Musharraf imposed his military rule under the garb of Chief Executive; he doffed the uniform in 2007 and relented power as President in 2008 when general elections were held and then came to power a series of ‘democrat’s like Asif Zardari and Nawaz Sharif.

Now that the army’s strategy has changed and they would like to take a few steps back as far as governance is concerned, the next army chief is expected to be a thorough soldier and may not have any interest in civilian matters.

It was clear that during the tenures of these democrats, the army had ample chance of political engineering and its role in state affairs became more dominant. If the ISI was involved, an intelligence service that has representation from all the three services, it was mainly the army that the politicians communicated with.

The Gate Number Char (of the army GHQ) as Shaikh Rashid likes to put it, was probably most frequented by the politicians in those days.

At present it seems the army has had enough. Though it was alleged that they brought Imran Khan to power and also played a role in the ‘No Confidence’ motion against him in the parliament, the khakis now say they have become apolitical. They are referred to by Imran Khan as ‘neutrals’. They would apparently like the politicians to fend for themselves now and settle matters for themselves at the civilian level. As rightly said, the place or the army is in the cantonments or at the borders and not in the country running state affairs.

While appointment of the next army chief is a matter purely for the army to handle, it must be endorsed by the prime minister. Since he is a coalition prime minister, Shahbaz Sharif would certainly like to have the agreement of his coalition partners before reaching a decision.

While it would be normal to appoint an army chief on the basis of seniority, the prime minister can always bring in a favourite of his own from behind the queue and appoint him the army chief. This is what happened when Gee, Ziaul Haq was appointed by Prime Minister Bhutto or when Gee. Pervez Musharraf was appointed by Prime Minister Nawaz Sharif.

It is also possible that the outgoing army chief, in this case Gen. Qamar Jawaid Bajwa, may recommend a name to the Prime Minister that may or may not be in the seniority list.

Now that the army’s strategy has changed and they would like to take a few steps back as far as governance is concerned, the next army chief is expected to be a thorough soldier and may not have any interest in civilian matters.

As it is, the situation on the country’s eastern and western borders is not very encouraging and whoever the army chief is, he must deal with the situation with the utmost focus and concentration.

It is time that Pakistan stopped being a military-controlled state. The approach has not given much to the citizens, who have a greater right towards national finances and other resources. The citizens must learn to live without the crutches of the army. Politicians must wean themselves out from support of the ‘establishment’ and it is important that efficiency and performance be brought into national institutions without seeking help from the armed forces.

It is only when this happens that the question, ‘Who will be Pakistan’s next Army Chief?’ will not be asked

The writer is editor of this magazine.