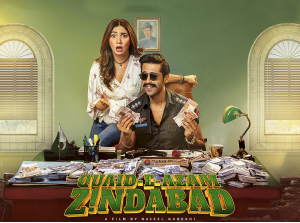 Fahad Mustafa first appeared in cinema in Na Maloom Afraad (2014) when he teamed with Javed Sheikh and Mohsin Abbas Haider. His latest venture is Quaid-e-Azam Zindabad in which he again aqppears with Javed Sheikh. His leading lady is Mahira Khan. The film is full ofaction, comedy, hot pursuits and thought-provoking moments regarding how we, as a nation, failed to follow the guiding principles of Quaid-e-Azam.

The presence of Nayyer Ejaz, Qavi Khan, and Mehmood Aslam make the film worth watching. After appearing in ‘Actor in Law’ and ‘Load Wedding’, Fahad Mustafa proves his mettle as a film actor again. His line delivery, on-screen presence, facial expressions, and aura are expected to continue in Quaid-e-Azam Zindabad. Mahira Khan did not appear in cinema after Superstar (2019). Will she be able to catch up to Fahad’s comic timing and line delivery n the latest film?

One wonders if there is a trend developing in Pakistani films where the lead actor is a police officer. In Ghabrana Nahi Hai (2022), Zahid Ahmed played a police officer alongside Saba Qamar. Perhaps it could be a way to promote goodness in the police force.

The screenplay, story, and lines are written by Fizza Ali Meerza and Nabeel Qureshi. The film is produced by Fizza Ali Meerza and Mehdi Ali while Nabeel Qureshi is the director. The makers of Actor in Law, Na Maloom Afraad 1 and 2, Load Wedding, and Khel Khel Mein are behind Quaid-e-Azam Zindabad. One can expect originality in terms of the script. However, the trailer shows Fahad Mustafa wearing a police uniform and standing in a large warehouse as he takes off his glasses. Similar scenes have been seen in Indian films in which leading actors played police officers, including Salman Khan (Dabangg), Ajay Devgan (Singham), Akhsay Kumar (Rowdy Rathore), and Ranveer Singh (Simmba). One hopes there are no parallels to the IndianCop Universe in Quaid-e-Azam Zindabad and that Pakistani sanctity is preserved.

Fahad Mustafa, once he becomes a police officer akin to his father, Qavi Khan, realizes that money does buy happiness. For Fahad, it does not matter where he acquires money until he can collect it. Something strange happens that compels him to turn over a new leaf and fight the system.

The presence of Nayyer Ejaz – supposedly as a villain – will add value to the movie as he has turned out to be an actor with the prowess to serve in a negative role. Javed Sheikh and Fahad Mustafa’s pair is a treat to watch.

“Inspector hokar, minister jitney paisay banaay hain tu nay!” is a line that sheds light on the angle the story takes. The film is likely to make an impact at the Pakistani box office.