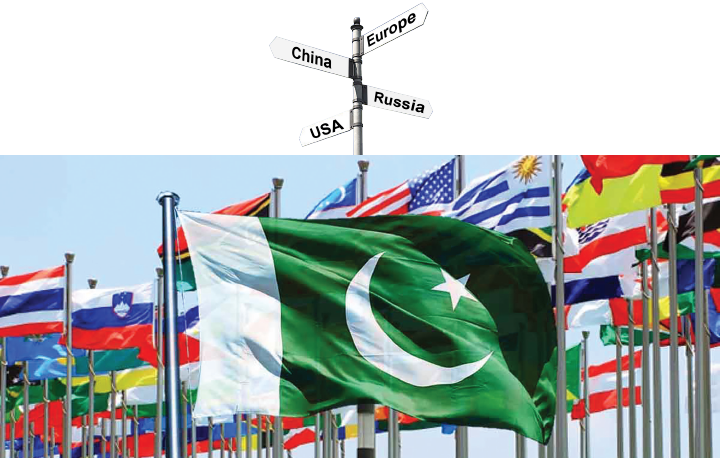 The foreign policy of a state remains the first line of defence to protect its ideological borders and meet its strategic interests. Pakistan’s current foreign policy apparently looks to be drooping and no major headway is meeting ends. It appears as if Pakistan has temporarily lost direction and steam in its diplomatic demeanour.

The Quaid-e-Azam believed in logic and law. This included, first, the fraternity, i.e. brotherhood among citizens or subjects, second, political, social and economic equality and lastly, liberty from oppression in any of its forms. In a nutshell, the Quaid wanted a prosperous, free, modern, liberal and democratic Pakistan. His vision of foreign policy focused on the concept of ‘live and let live’ in peace.

Pakistan unfortunately got embroiled in camp politics which proved to be detrimental to its interests. Pakistan should have chosen to remain non-aligned in the tussle between SEATO-CENTO and Warsaw Pact countries. Its preference to join the capitalist block against the communists resulted in negation of the Quaid’s vision, i.e. ‘friendship towards all states’. Pakistan, thus, unnecessarily indulged the war of biggies and created enemies for itself. India played smart and chose to remain a non-aligned political actor and it seems that Pakistan has not learnt anything in the last 75 years. The country’s foreign policy has remained security oriented and geo-strategy has been on the driving seat rather than geo-economy. The trust deficit between India and Pakistan has cost a lot and we have been relegating human development in favour of building military muscle.

In this period, some sense has prevailed and Pakistan’s National Security Policy [NSP] was unveiled in January 2022 which demonstrated a clear paradigm shift when it clearly outlined that henceforth our foreign policy shall be geo-economy-oriented instead of geo-strategy oriented. The state shall enter a social contract with its citizens and equal rights shall be ensured. It also resolved to avoid camp politics based on security orientation and the alliances shall only be economics-based. Albeit, the NSP has largely been appreciated both at domestic and international levels for having a foreign policy with a paradigm shift, yet it would be challenging for the foreign office to meet the ends.

Pakistan may not be able to remain aloof from geo-strategic happenings across South Asia, so it has to adopt a gradual approach in its foreign policy to meet the ends in terms of strategic interests. Moreover, Pakistan has to have a strong and self-sustained economy as a pre-requisite to opting for non-aligned positions. The states that are surviving on financial aid and take loans as a success of their diplomacy and foreign policies are bound to remain captive of their finance masters. Nothing is free in this world. Aid comes with strings attached and the concept of sovereignty becomes subjective and compromises are made. Pakistan unfortunately is a true example of this.


Despite being a nuclear weapons state with the world’s fifth largest armed forces and the 26th largest economy with regard to public purchasing power, Pakistan could not make the desired impact internationally and instead, has been in the limelight for negative tags courtesy India and the West. The internal political situation is far from normal and international actors are reluctant to engage with Pakistani representatives as they are not sure of their credibility. Pakistani political parties have further damaged the country’s foreign policy choices by exploiting foreign policy as a tool to meet their political ends. Discussing foreign policy matters, especially with the U.S., in political public gatherings has negatively impacted Pakistan. The U.S. and EU have been antagonized intentionally or unintentionally, which has resulted in diluting Pakistan’s economic and diplomatic trajectories. Although the diplomatic corp. is exerting hard for damage control but it would need some time to regain international confidence. For instance, it is the U.S. and its likeminded countries which are deliberately denying Pakistan bailout packages from the IMF and the World Bank besides continuously keeping the country in the FATF grey list despite completing actions on its action plan comprising 34 items.

Pakistani political leadership has been immature and has downplayed the diplomats’ efforts to keep Pakistan relevant. Unfortunately, the narrative being built by the political leaders that Pakistan has submitted to the U.S. demands and has compromised its sovereignty did sell among the masses as popular rhetoric. However, it cost us a lot in financial and diplomatic terms. The threat of economic default still looms large as the international institutions have pulled themselves away from rescuing Pakistan at least for the time being. The rhetoric of the US and West could have been sustained provided we were economically on our feet.

Sovereignty is a relative term, especially in a globalized world. No state in the world can remain 100% sovereign. It is a kind of chess game in which actors make deliberate and calculated withdrawals so that they make a larger leap into the future. Popular anti-American slogans have been preferred for vested political gains. On the diplomatic front too, damages can be clearly seen. Pakistan was not invited by its friends China and Russia to the BRICS-Plus Summit as both were not happy with our jerky changes in established and committed foreign policy stance. Pakistan is concerned about Indian successes at the diplomatic level, including increased influence and relevance in the geo-strategic realm. For instance, Indian inclusion in Indo-Pacific Policy, QUAD, I2U2 and the recently culminated 2+2 meetings are sources of concern for Pakistan. An unstable Afghanistan along our Western border and non-recognition of the Taliban government due to international pressure is gradually converting into two-front threats for Pakistan. The TTP-led terrorist attacks and the organization’s resurgence are being seen with concern and might undermine the claim of winning the global war on terror. Similarly, Iran remains sceptical of Pakistan’s position and looks for more constructive engagements with India.

What is the way forward in Pakistan’s foreign policy directions and choices? Pakistan must have a consensus-based economy and a foreign policy in which national interests are clearly listed. The policy should have constitutional cover and must not be changed irrespective of any political government. Pakistan will have to avoid camp politics and try to remain non-aligned. We should be partners in peace only and not wars. We must not be sending our troops to fight others’ wars.

Pakistan must engage with its neighbours, including India. It can follow the Chinese approach. India sees China as the biggest threat and still it has a mutual trade volume of almost 125 billion USD. Pakistan too can engage and trade for the betterment of its citizens. Engagement circumvents misperceptions and avoids hostilities. Isolation is no option for Pakistan. It can also have gas and energy corridors with China, Iran and India.

Pakistan must establish positions as per international norms. Recently, COAS General Qamar Javed Bajwa, while addressing the passing out parade at Royal Military Academy, U.K., talked of global commons, i.e. keeping the long-term sustainability of Outer Space, High Seas, Antarctica and the Environment. He also categorically mentioned that the armed forces should avoid wars. The stance sufficiently provides a launching pad for the diplomats to build on Pakistan’s image as a peace-loving nation and not one which exports terrorism.

Pakistan needs a consistent foreign policy direction devised according to well-deliberated and thought-out national interests that must be people-centric and not security-dominated. Political maturity and seriousness should remain central to a concrete foreign policy.