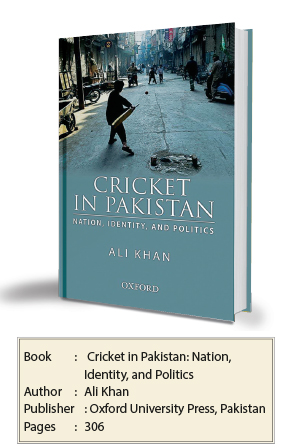 Cricket is often billed as a remnant of the subcontinent’s chequered colonial past. Even so, the sport hasn’t lost its significance in the postcolonial context and is deeply embedded with the fabric of social life. In Pakistan, the sport is often viewed as a unifying force that has the power to erase the boundaries among disparate ethnic groups.

Ali Khan’s ‘Cricket in Pakistan: Nation, Identity and Politics’ builds on the magnetic appeal of cricket in the country and highlights the socio-political importance of the sport. The introductory section of the book suggests that the gentleman’s game has been shaped by historical developments, political cataclysms and economic considerations -- a fact that can’t be discredited so easily. Khan’s analysis doesn’t view the sport as a passive force that is fuelled by external factors alone. Instead, the author remains mindful of the fact that cricket has simultaneously acted as a change-agent and reconfigured the very dynamics that have ensured its survival in the country.

Khan’s observation stands out as it is realistic and original. The book ‘Cricket in Pakistan: Nation, Identity and Politics’ also benefits from a refreshing originality. Unlike the glut of all-too-familiar books that only present a historical overview of Pakistan cricket, Khan’s book steers clear of a descriptive, near-journalistic account. As a result, the text moves beyond superficial considerations and unveils insights on the subject through an academic lens.

Khan ought to be commended for examining this issue in a strictly academic sense as there is scant research on Pakistan cricket that is geared towards providing a critical appraisal of its social function. This is somewhat alarming as cricket has a central position in the public imagination. On the strength of that alone, Cricket in Pakistan: Nation, Identity and Politics can be viewed as a seminal text.

However, the merits of this book cannot be disguised through these seemingly tokenistic claims. Khan’s analysis is valuable to the discourse on Pakistan cricket as it covers a diverse spectrum of concerns pertaining to the sport. A detailed scrutiny of the evolving nature of cricket in the Pakistani context and the root of the inconsistencies in the sport have been examined. A scintillating chapter in the book reflects on the ways in which politics and patronage from the powers-that-be have altered the direction of Pakistan cricket. In a similar vein, the role of cricket in redefining international relations has also been discussed in great depth.

Match-fixing has become synonymous with Pakistan cricket and Khan’s analysis offers a clear, sufficiently detailed overview on the practice. The text demystifies the causes and consequences of such malpractices, and correlates with the overarching climate of corruption that prevails in Pakistan. The adverse repercussions of the commercialization of cricket have also been outlined. Furthermore, the heated cricket-based rivalry between India and Pakistan has been used as a takeoff point to highlight the ways in which the sport has inspired stronger bilateral relations between the enemy nations.

At first glance, it appears Cricket in Pakistan: Nation, Identity, and Politics turns an intimate gaze on the gentleman’s game. As readers approach the end of the book, they will find that it aspires to do more than just that. Khan’s analysis uses cricket as a springboard to assess Pakistan’s ever-evolving socio-political milieu. In the introductory section, Khan writes that colonialism, Partition, Islam, India and terrorism are some of the key indicators of Pakistan’s identity. “But what connects all of these [factors] is cricket,” the author states. “Their role is reflected in their role in cricket in Pakistan and an analysis [of them] leads us to a unique insight on Pakistan.”

Through a rich, holistic analysis of the sport, the book ‘Cricket in Pakistan: Nation, Identity, and Politics’ raises pertinent points about the country’s politics, pastimes and perceptions.