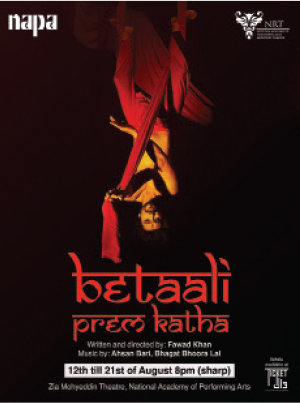 The National Academy of Performing Arts (NAPA) delighted audiences yet again as it catered to a packed house and garnered praise for Betaali Prem Katha, written and directed by Fawad Khan, NAPA alumnus, actor and faculty member at the academy. The play was performed at the Zia Mohyeddin Theatre from 14th to 24th of August.

Betaali Prem Katha is inspired by a legendary story from an ancient Sanskrit epic, Kathasaritsagara (Ocean of the Streams of Stories). It is a famous 11th-century collection of loosely strung together Indian legends, fairy tales, and folk tales, comprising multiple layers of story within a story, to argue that the experience of space is gendered.

The play charts the story of Prem, who is a Brahmin boy in search of understanding, wisdom and knowledge. He inadvertently reaches the city of Roopnagar, a place that his father had strictly warned him against visiting. Here, Prem meets a man who claims to be Betaali, an almost mythical creature who possesses magical powers and a flair for story-telling. However, this time around, instead of a story, there is a play, that leaves everyone with a question at the end. The deal between the two is that if Prem cannot answer a question correctly, then Betaali will crush him to pieces and drink his blood. Following this is a series of bizarre events that keep you hooked to your seats for the full two-hour play.

Talking about plays, productions, and performances can be difficult. But this one was unquestionably one of the best, especially one that hits close to home. Flushed with entertainment, Betaali was all about decolonizing our literature and searching and questioning our own roots, in a nation that is primarily dominated by Western works. Brilliantly searching for knowledge and wisdom, the production is one of the most theatrically ambitious shows of recent months. A heady mix of history, mythology and magic, brought to reality the Pakistani dream while recreating the giddy thrill it promises. In the age of political theatre that demands a large chunk of our attention, this performance has gained even more resonance as it quite so incisively captures myth and magic in a localized style.

I believe drama has an old-school charm to it, which is rare to find in theatre today. With music by Bhagat Bhoora Laal and costume by Erum Bashir, this is a genuine game-changer.

Directed by Fawad Khan, the play would be a straight-up five stars! Respected and loved in equal measure, Fawad has undoubtedly galvanized a new generation of directors. Although he is mostly educated in Western plays and classics of Shakespeare, Chekhov, Flaubert and the like, he has struggled to achieve something that is more relatable and regional, somewhat inspired by the writings of Intizar Hussain. As it also reflects Sanskrit texts, it is obvious that such elements are quite evident in language, costume, set, and overall performances. Pakistan and India share heritage, history, language and so much more, combined with the universal emotion which clicks with people from both countries, is nearly similar. Fawad situates his work amid actors who have studied and worked around such texts, as is evident from their mammoth performances, with attention to social contexts and historical contours.

The play features an incredible emotional pungency, and what might just be a theatrical piece is transformed into a moving meditation on the colours of awareness and insight, the nature of theatre and the extraordinary possibilities of art itself. It will be useful to theatre-goers, especially those who take keen interest in literature, religion, and history, alongside theatre and performing arts, and will encourage a renewed interest in this masterpiece of Sanskrit literature.