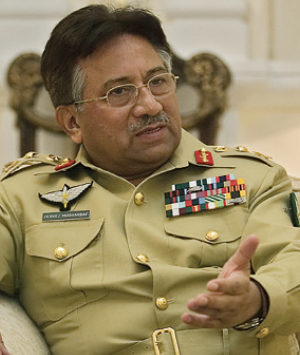 It was alleged that when the Kargil war happened, there were documents which claimed that it was Indian private TV channels that played a major role [in the war], so Pakistan should also have private channels. Gen Musharraf’s government used them on a limited scale.”

This is incorrect and misleading. During Benazir’s second tenure, only one unfairly authorised private FM channel began to operate. This was because the executive power of the prime minister was misused in 1995 to grant — without publishing public notices inviting applications as per declared eligibility criteria — exclusive rights in perpetuity, to a single private party reportedly close to the spouse of the prime minister.

This was done to operate the first-ever privately-owned FM radio and TV network in the country’s history on the basis of a summary put up to the prime minister by Hussain Haqqani who at the time was the information secretary.

As this writer had long written and campaigned for private electronic media, on belatedly learning of this outrageous misuse of power, in May 1996, a public interest petition was submitted directly to the Supreme Court under Article 184 (3) of the Constitution.

It was pointed out that the airwaves of a country, like its mineral resources, happen to be the property of the nation. The use of the spectrum cannot be allocated arbitrarily at the discretion of the prime minister or any other authority without ensuring that all eligible citizens have fair and equal opportunity to apply for the use of the airwaves.


While regrettably allowing the continuation of the interest already created, the apex court held two further hearings in 1996 and appeared likely to grant the prayers listed in the petition. However, events overtook. The second Benazir government was dismissed by president Farooq Leghari on Nov 5, 1996.

I then led the drafting of the Electronic Media Regulatory Authority Ordinance (EMRA) that was promulgated on Feb 14, 1997, the first such law in Pakistan’s history. Earlier in January 1997, the caretaker government also promulgated the first-ever Freedom of Information Ordinance (FoI).

Our expectations that the succeeding, second government of Nawaz Sharif would convert both these unprecedented ordinances into permanent Acts of parliament within four months were shattered when that government deliberately allowed both the ordinances to lapse. I do not recall any protests at that time by any professional body of media workers or owners.

When I joined the cabinet of Gen Pervez Musharraf as adviser on national affairs and information, later as federal minister, after the incident of Oct 12, 1999, the cabinet afforded approval, in principle, twice in 2000, to a slightly amended version of the original EMRA draft.

A few minor amendments were further required. The subject of the Kargil war and the claimed role of private Indian media was never discussed in the cabinet, nor in any of the several discussions on the subject that I held with Gen Musharraf, be these at GHQ, or in our one-on-one meetings. Gen Musharraf, already being aware of the fate of the original EMRA law of February 1997, was convinced that independent electronic media should be legally allowed in the public interest alone. Neither in 1996-97 nor in 1999-2000 did PTV ‘oppose’ the proposal. If it had, it would have been overruled.

Though it is inconvenient to acknowledge that a military dictator can be more supportive of independent private media than elected political governments, credit should go to Gen Musharraf that, even after I resigned from his cabinet in November 2000, he retained his pledge and eventually enforced the new Electronic Media Regulatory Authority (PEMRA) Ordinance on March 1, 2002. There was no “limited scale”. Licences were handed out in abundance; in fact, in excess. Even cross-media ownership was allowed, and the electronic media landscape was transformed; for better and for worse. Separately, the FoI law was also enforced, initiating unprecedented access to officially controlled information.