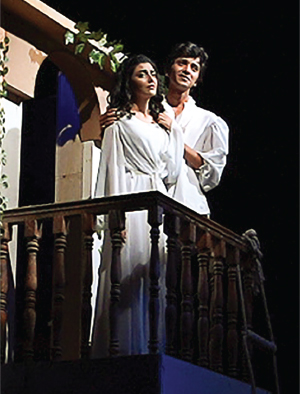 The National Academy of Performing Arts (NAPA) staged a memorable production after a long time owing to the Corona pandemic. The Urdu translation of Romeo and Juliet by William Shakespeare was performed under the direction of Zia Mohyeddin, the President Emeritus of NAPA. The drama was translated by Khalid Ahmed, the head of theatre at NAPA. The academy has previously staged several Urdu translations of Shakespeare by Ahmed, such as A Midsummer Night’s Dream and King Lear. However, this romantic tragedy about two star-crossed lovers, received a houseful everyday it was performed from June 17 to June 26, 2022. An extra matinee show was even staged to accommodate those who couldn’t manage to watch.

The play was set in the backdrop of Verona, which is dominated by two influential houses of Capulet and Montague. Demanding loyalties from friends and family, both the houses are in an age-old feud. The Prince warns everyone against further bloodshed and mayhem, or a death sentence would be announced. Juliet Capulet and the hopeless romantic Romeo Montague meet at a feast that the latter has gate crashed into with his friends. The two fall in love at first sight, which is the fundamental emotion, superseding everything else. With the help of Friar Lawrence in the hope of making amends between the two houses, Romeo and Juliet marry in secrecy. In an action-packed scene, Tybalt, Juliet’s cousin, kills Romeo’s friend. Romeo retaliates by fighting with Tybalt, who is stabbed and killed. Romeo, according to the law, instead of receiving the death sentence, is banished from Verona, to Mantua. Meanwhile, Capulet strives to convince his daughter to marry Count Paris. But Juliet conspires with Friar Lawrence to escape this marriage. The play ends in a tragedy when all three, Romeo, Juliet and Count Paris die amongst a scheme, delay and misunderstanding. Both the families realize the erroneous, emotional elements that led only to self-destructive decisions and losing their loved ones.

The play Romeo and Juliet was brimming with emotion, humour, action and drama, with plenty of tragic and romantic poetry. Khalid Ahmed’s brilliant translation was thick with versatile elements, symbolism and metaphors that explored life and intensity. Needless to say, he ensured that the translation retained the English essence. The language was able to go beyond precincts for a wider, mainstream audience of theatre lovers. Zia Mohyeddin proved his expertise as a director yet again with his hardnosed endeavour to bring only the best to the stage.

The play was an epic portrayal of Zia, where he ensured that voice, diction, stresses, accent, dialogue delivery, pauses, and language were not compromised. There were 32 cast members and all of them seemed quite aligned in terms of dance, choreography, dialogue, props, movement and costume design. One could easily see the efforts of the technical crew that took care of the minutest of details, to create an apt visual required for the production. The level of professionalism from Zia Mohyeddin could be seen in every element of stagecraft, with his imprint across all actors involved.

Romeo (Ali Sher), a sophomore theatre student at NAPA, played the lead role with quite an underwhelming performance, especially considering that his role required prominent presence on the stage. This was further clear when one could point out praiseworthy performances and commendable enactments by Juliet (Noreen Gulwani), Romeo’s friend Mercutio (Fawad Khan), a faculty member, and Anna (Bakhtawar Mazhar) as Juliet’s nanny. The romance and tragedy was a deeper probe into everything that is still wrong with Pakistani society – intolerance, injustice, enmity, self-destruction, liberties, legal structures, societal extremes, power dynamics and parenting struggles. All the characters had tried to enter an aura with the hope of achieving marital bliss, only to be staring at cracked mirrors. Technically, every scene captured the riveting life of Verona and Mantua, whether it was the church, the graveyard, the ballroom, or the iconic balcony. The dance choreography and battle scenes depicted rigorous rehearsals.

It can be safely said that Romeo and Juliet was a love letter to the Urdu language as it was layered with impeccable dialogue, excellent transitions, dramatic light design, familial realism, perfect expressions, striking romance, desperate tragedy, brutal enmity, and radiant poetry. It clearly resonated with the dilemmas confronting South Asian youth in today’s era and times, despite the fact that it was written in the 15th century.