Though a military ruler, General Pervez Musharraf brought in reforms that many a civilian ruler could not even think of. 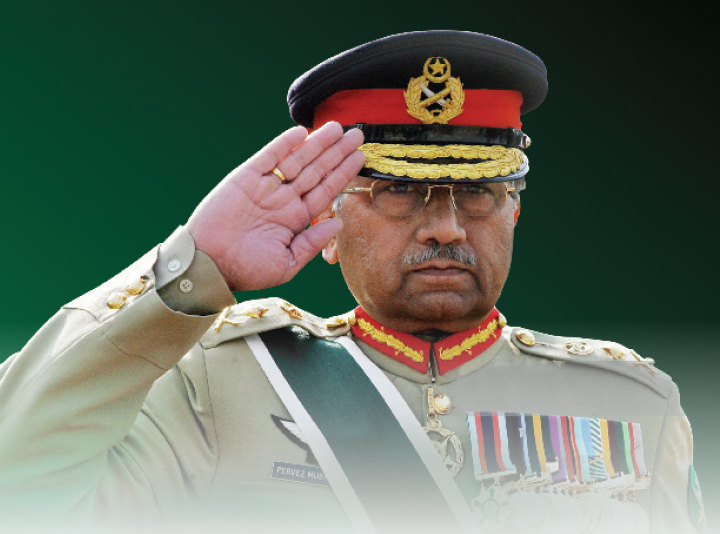 General Musharraf was in the true sense a professional soldier. He was commissioned in the Corp of Artillery, but his passion for adventure and high-risk assignments lured him to serve in the Special Services Group during his relatively early part of service. His professional competence and dedication to service earned him a solid reputation and he rose to the highest rank in the army. I had known him from the days that he was serving in Kharian as a major in an Artillery regiment and I was commanding an EME Battalion. When he was the Corp Commander in Mangla I had invited him to attend my daughter’s wedding in Islamabad and I casually asked him what were his chances of becoming the Army Chief, as the change was due in a few months. He unhesitatingly replied that he was confident to make it, despite the fact he was not the senior most among the aspirants. This was the level of his self-confidence and zeal to serve the country in the highest rank.

Under President Musharraf, Pakistan became a very viable country. Internationally, Pakistan’s status rose high. Our growth was very good - in one particular year, it reached 6.8 percent. Even President Musharraf’s critics will agree that he was the only leader who came almost near to settling the Kashmir dispute. At the Non-Aligned Summit in Malaysia in 2003, which was attended by leaders from all over the world, two leaders were particularly prominent. One was Cuba’s Fidel Castro and the other was Pakistan President Pervez Musharraf. At the end of the Conference, I managed to convince President Musharraf that he should also address the press conference that was to be held because this would be a very good opportunity for him to gain world media attention. He was reluctant at first but then he agreed. When the media learnt that he was one of the speakers, they rushed in like mad. The place was so full that there were even people sitting on the ground. There were many other world leaders also present there, such as President Hosni Mubarak and Prime Minister Vajpayee. These are irrefutable facts that history will judge him with.

However, in the capacity as President, Musharraf’s constraints were many and military training was certainly one of them. Policies developed by military command are formulated for issues generally looked at in isolation. This is understandable as military training emphasizes elimination of extraneous factors, but the real world is not compartmentalized. General Zia made the same mistake thinking that Pakistan’s active participation in the Afghan Jihad would have no consequences.

General Musharraf was under considerable international pressure, particularly from the US, to shed his uniform and legitimize his rule through free and fair elections.

Initially, General Musharraf had planned to stay for one or two years but the lust for power and his genuine desire to put the country on the “right track” made him change his mind. The lust for power and the vested interests of those surrounding the military ruler are opposed to abandoning power. This is a common phenomenon that had also influenced the three military rulers that came before him.

The simultaneous involvement of Pakistan in the Afghan Jihad and support of the Kashmiri struggle was a policy I had thought Pakistan would not be able to bear. He had b had advised to focus on one at a time. But he thought that I was going soft on India. The inability to see the bigger picture that makes it imperative that military policy should be subservient to national policy. Pakistani people deeply respect the role and importance of military in providing the nation’s security under extremely challenging conditions but are opposed to military intervention in politics. When a military leader usurps legitimate civilian authority, there is temporary calm and sense of order but it is short-lived. In the longer term it undermines democratic development, lowers the country’s image and damages national security in the process.

Military leaders prefer centralized government and clear command and control systems. It is so obvious, clear lines of authority are what armies need to do their job. It is therefore not surprising that National Assemblies and Senate are dissolved and delegitimized by the state under military rule, as it happened in case of East Pakistan under General Yahya, or Balochistan under General Musharraf. Civil war can be the result as it was in East Pakistan. Less serious, but there is a simmering discontent in Balochistan since Musharraf’s days that needs to be addressed. But what is generally overlooked is that military takeovers have resulted in causing a huge setback to the nascent democracy of Pakistan.


As is common with military leaders they look for legitimacy from civilian groups or parties they think they can control. The religious right being the most proffered. Interestingly, General Zia and General Musharraf acted very similarly in that respect. However, they were not alone, as democratically elected leaders with authoritarian tendencies who are determined to remain in office by any means, also pander to these religious groups as we have witnessed in the past with Z. A. Bhutto and Nawaz Sharif and recently with Imran Khan. By luring political leaders to be a part of a military ruler’s cabinet further undermines democracy and confuses the electorate.

Gen Pervez Musharraf is a statesman of a high calibre and his conduct has always reflected this flair. He believed in the vitality and significance of Pakistan and during a few of his meetings with foreign leaders of developed world, I would notice that he would treat them as equals and always project Pakistan’s prominence without any reservations.With this vision of Pakistan,he was very enthusiastic to connect the country’s infrastructure with regional states and liberally approved projects to link Pakistan with China, India, Iran, Afghanistan and Central Asia.

He is very deliberate and thorough in his style and he would master all the details of his plans, pen these in his own hand on his yellow pad and labour to explain it to the masses in public meetings.
The General was very soft and sympathetic towards the common man and I had a very easy time to seek his liberal approval for Zakat Bait ul Mal funds for education, health, business, etc. and facilities for the disadvantaged segment of society. As a person, he was very courteous,down to earth,open to debate and very honourable and never sought any personal gain for himself or his family .
He has a very lively and colourful personality.Even after a full day of busy political and administrative assignments, he would find time for a game of golf or tennis and be very competitive on the court.

I wish he would come back to Pakistan with dignity and spend his remaining time with relatives and friends.

To stay in power military rulers, undermine state institutions and General Musharraf was no exception. Civil and political rights were suspended. He manipulated the judiciary, getting rid of judges who were principled and would not have legitimized his military rule. Mediocre jurists, eager to get ahead by accommodating the new military leader, usually replace them. This has been the history of Pakistan and the same was replayed during Musharraf’s period. But Iftikhar Muhammad Chowdhury was a hard nut to crack and gave him a tough time with the lawyers fully backing him.

Then there is the specter of external pressure. General Musharraf was under considerable international pressure, particularly from the US, to shed his uniform and legitimize his rule through free and fair elections. He committed to relinquish his military position and the uniform. As the deadline drew near, he changed his mind and sought domestic support, especially from the military for keeping it while President. I was one of fifty or so senior ex-military and other personalities invited to a gathering with Musharraf in which he spoke at length listing his achievements and sought to enlist support for keeping the uniform. What it really implied was that while he will be contesting for elections, he should be allowed to retain his military command. In the event, only a few of his closest supporters did so and the overwhelming majority in the hall, myself included, spoke in favour of his relinquishing the uniform and making his rule more legitimate through free and fair elections. He was clearly disappointed as this is not what he wanted to hear.

He was more liberal, more forward looking and less vindictive in comparison to some of his predecessors.

It is important, however, to understand that when a military leader usurps power, he has to undermine the democratic structure to retain his illegal hold on power. Musharraf was no exception. But he was more liberal, more forward looking and less vindictive in comparison to some of his predecessors.

There are also broad lessons that Pakistan military and civilian leadership ought to draw from the conduct of our past rulers. There is no permeance in anything worldly including power that rank, status or political position bestows on one. What is remembered is the reputation and the good work during one’s lifetime. Moreover, if Generals or Admirals want to get into politics, we have the classic examples of General Eisenhower and President De Gaulle who fought elections and rose to those heights.