Pervez Musharraf’s unremitting energy, his diligent work and his appointment of capable people made him an outstanding leader. 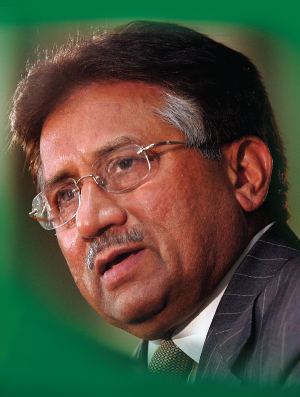 It was immediately after the Kargil War (1999) and President Gen. Musharraf was visiting Multan Garrison. During interaction over luncheon with ranking officers (Majors/Lt. Cols.), when asked about the nature Kargil War and our strategic intelligence analysis, he was candid, forthcoming and honest in accepting our shortcomings and errors of judgement, where due. In the cited interaction, emboldened by his honesty, he was subjected to many uncomfortable questions and he honestly answered most, if not all.

Despite his many lackings, this was President Musharraf’s strongest quality and, like General Zia’s disarming smile, made him survive many tricky and tight situations.

General Musharraf is a man of outstanding integrity, character and quick wit who is honest and devoted to his country, Pakistan. Before taking any decision, he thought of how it would affect Pakistan and its people. Nothing mattered more to him than Pakistan's people and their well-being. Sharp, well-spoken and very intelligent, harbouring on brilliance, his ability to grasp and absorb essentials of new concepts was outstanding. At the same time he was tolerant, listening to and appreciating fresh ideas no matter how and where they came from. Logical and appreciative, he was socially congenial and would put a person at ease in the first few minutes of any meeting.

In 1999 when he became 'in charge' of Pakistan, he inherited a country on the brink of disaster. The economy was in ruins, the country was eyed with suspicion by the international community, Pakistan was perhaps the most 'sanctioned' country in the world. The internal situation in Pakistan was bad - law and order was near collapse, the police and law enforcement agencies were incapable and corrupted. Nepotism, corruption, individual/family interests and short term personal interests of influential families was the order of the day.

In a matter of six months to a year Pervez Musharraf imbued the country with his personal sterling qualities. He worked day and night (slept 4 to 5 hrs) and brought Pakistan to a stage where, whenever he spoke in front of any audience, be they local or foreign (British, Swiss, Indian, American) I would hear whispers conveying "We wish we had a leader like him!"

General Musharraf's leadership and governance was outstanding. Pakistan's image improved, people felt proud and confident of the direction in which their country was moving. Great development in road infrastructure took place. Dams for production of cheap electricity were started. A deep sea port at Gawader was initiated, new canals (Kachi Canal) and discovery of gold/copper mines in Reko Diq in Balochistan took place. Coal mines in Sindh were developed while universities, cadet colleges and dams at Neelam-Jhelum rivers, Gomalzam and Diamir-Bhasha were started by him.

Multan was the third time the Paltan, I was commanding and had hosted him. Earlier, he had reviewed an agricultural exhibition and de-silting of canals in Khanewal District. Seeing him transform from Corps Commander in Mangla (when I as Major was stationed in Kharian) to the CEO and then President of Pakistan (2001) was phenomenal and his on-job performance and diligence was inspiring. His rule was not without problems and this piece would render an honest appraisal of his stint in power.

Field Marshal Ayub Khan is credited for being a ‘mardam shanas’ - someone who knew the right man for the right job. President Musharraf trails him closely behind… something that Imran Khan needs to work diligently on.

Military take-over under Musharraf (Oct 12, 1999) after the ugly change of command by Nawaz Sharif, appointing an officer with lesser credentials to lead the Army, all while Musharraf was visiting Sri Lanka officially, was unfortunate. Not allowing his plane to land was criminal to say the least, and morally bankrupt. When I asked my enlisted driver about Musharraf’s removal by Mian Sahib… his reply was iconic and reflected the thinking of rank and file. He said, aisay to kisi sipahee ko bhi nahi nikaltay (you do not treat even a soldier like this).

Musharraf’s unremitting energy thereafter, his diligent work, his appointment of capable people, his regular follow-up and his astute dealings with the 50-nation alliance led by the USA, the sole super power next door in Afghanistan, was commendable. True to his calling and as a dictate of our strategic environment, his government ensured Pakistan’s ‘strategic relevance’ at the regional and international fora. Sensing and grabbing the opportunity that the War on Terror (WOT) offered for his own survival and global acceptability, he cashiered it to Pakistan’s benefit economically, militarily, politically and geo-strategically.

Coalition Support Fund, the cost of war reparations, military grants and aids, equipment supply and enhanced military training and cooperation with the US/NATO made the Military’s biting teeth more deadly including the PAF and PN.


Economy took time to pick and began to expand after initial three years. It was purposely kept in check following IMF’s stabilization model. It rebounded in the last five years (2002-2007). In the first eight years, the size of economy increased by almost 50%, and per capita income rose nearly 25%. GDP per capita increased at nearly twice the rate of population growth, reducing poverty. GDP more than doubled to $144b since 1999. The rate of investment increased from 17.2 per cent of GDP (2001-02) to 23.0 per cent (2006-07) mainly due to foreign inflows.

With an average growth of 7.0% (2006-07), Pakistan was one of the four fastest growing economies in the Asian region. World Bank’s lead economist for South Asia, Tara Vishwanath, cited moving 5% Pakistanis from poor to middle class in three years from 2001-2004, swelling the middle class to 30 million, with an average yearly income of about $10,000 per person. Most significantly, Pakistan said farewell to the predatory IMF Program.

This economic performance is impressive even by contemporary standards. It was politics that let Musharraf down. Under compulsion to legitimize his rule, he had to manufacture PML-Q, go through a referendum and hold elections under SC rulings. He held free and fair elections in 2002, in an effort to return democratic rule to Pakistan.

Participating in the Global war on terror by Pakistan under Musharraf, on Pakistan’s terms was appreciable. However, owning this war in entirety is debatable even to this day.

Sacking Iftikhar Chaudhry, the controversial SC Chief Justice, ‘ostensibly’ under advice; and the consequent Lawyers’ Movement was the beginning of his undoing. The controversy of holding both the offices of President and COAS and the state of emergency that followed his re-election as President on 6 October 2007, led to his downfall after the infamous NRO.

This National Reconciliation Order is indefensible to this day, as it legitimized corruption, eroding the very foundations of the Musharraf-built Pakistan. His economic gains sadly were lost on the political front under bad advice, hubris and induced desperation.

The “dictator” Musharraf ensured unprecedented deregulation of mass media, creating prolific growth, jobs and openness like never before. This alone, more than any other notion like ‘enlightened moderation’ etc., remains his enduring legacy.

The writer focuses on Global Affairs and Political Sociology. He can be reached at tayyarinam@hotmail.com; his Twitter handle is @20_Inam