How Gen. Musharraf
Restructured the Economy

Economic growth was possible from 2002 to 2008 because a strong government mobilized domestic resources and ensured that they were utilized productively. 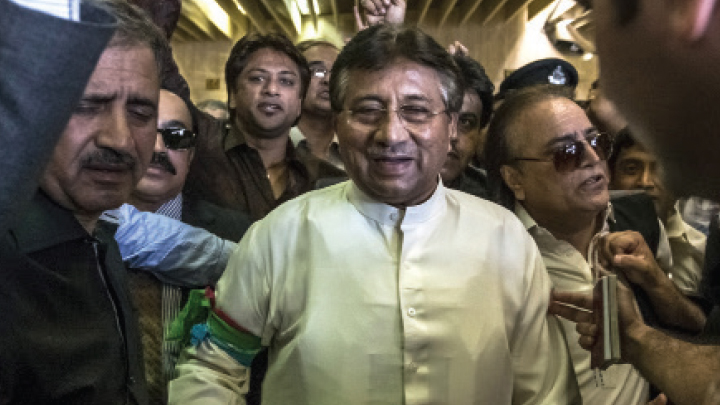 President Musharraf assumed power in October 1999 under difficult circumstances. Pakistan was already facing sanctions for nuclear testing and these were compounded by sanctions against the military takeover. External liquidity had dried up due to freezing of foreign currency deposits in May 1998. The loss of confidence and the burden of sanctions evaporated workers’ remittances, foreign investment and foreign currency deposits. The State Bank’s reserves had dwindled to cover a few weeks’ imports.

Ninety nine percent leaders demand respect, President Pervez Musharraf is among those 1% leaders who command respect.
His economic policies, foreign affairs policies and governance policies were aligned with this slogan "Pakistan First".
During his tenure of 2000-07, Pakistan positioned itself as one of the four fastest growing economies in the Asian region with its growth averaging 7% per year.

Relations with the U.S. were at their peak. Musharraf also made amends and improved relations with neighbouring India.

I recall how the infrastructure of my city Karachi drastically improved during President Musharraf’s tenure.

I will remember that during President Musharraf’s tenure there was unprecedented deregulation of the mass media, economic growth, and vibrant debate that had never occurred before him.

After entering an agreement with the IMF, the country’s external debt portfolio was restructured to align it with its debt servicing capacity. By re-profiling the stock of official bilateral debt through the Paris Club, substituting concessional loans for non-concessional loans from international financial institutions, pre-paying expensive loans and liquidating short-term external liabilities, the government was able to reduce the stock of external debt and liabilities as percentage of foreign exchange earnings from 125 percent from 224 percent and debt servicing to 9 percent from 26 percent.

Fiscal consolidation was achieved by raising tax revenues, reducing expenditures, cutting down subsidies and containing the losses of public enterprises. Tax reforms were undertaken to widen the tax base, remove direct contact between tax payers and tax collectors, introduce value-added tax as the major source of revenue, simplify tax administration and strengthen the capacity of the Central Board of Revenue. The adoption of universal self-assessment followed by random audit of selected tax returns, automation and reorganization of the tax machinery, helped tax collection to double in five years. Fiscal deficit remained below or slightly above 4 percent of GDP, despite the post-earthquake relief and reconstruction expenditures.

An aggressive privatization plan of State owned enterprises in oil and gas, banking, telecommunications and energy sectors yielded $ 3 billion. Foreign investors were encouraged to participate in the privatization process.


Financial sector reforms were accelerated by granting autonomy and strengthening the Central Bank. The privatization of Habib Bank, United Bank, and Allied Bank - three large nationalized commercial banks of the country transformed the banking sector into an efficient, privately-owned and managed sector but regulated by a strong and vigilant Central Bank. Private sector credit grew at an average rate of 25 % annually. Profitability of the banking sector surged while net NPLs ratio declined to 2.3%. Interest rates touched as low as 4 to 5 percent. Agriculture credit disbursement by banks multiplied six-fold and most of the credit went to small farmers. More than 1.2 million borrowers received micro-finance loans without any collateral. Capital market capitalization rose eight times and 60 new IPOs were listed and 48 corporate debt bonds issued.

Trade policy reforms and liberalization helped the country in earning foreign exchange through non-debt creating flows ---higher exports, remittances and FDI. Exports of goods almost tripled from $ 7.8 billion to $ 21.2 billion being able to finance 80 percent of imports. Along with a six-fold increase in the workers’ remittances ($ 1billion to $ 6.5 billion) the current account balance turned surplus in three out of eight years and foreign exchange earnings almost tripled from $ 16.8 billion to $ 46.0 billion. Tariffs on imports were rationalized and brought down to average 7.6 percent. FDI inflows touched $ 5 billion in each of the last two years and were channelled mainly to telecom, banking sector and oil and gas sectors. Foreign exchange reserves rose from 991 million dollars to US $ 14 billion covering six months’ imports.

Musharraf had a better opportunity to turn Pakistan around than any other leader – and he flunked it due to his ego.

On 9 January 2002 President General Pervez Musharraf returned to Pakistan from the SAARC Summit in Kathmandu via China after upstaging Atal Bihari Vajpayee with his famous handshake. However, in his absence the Indian Army mobilised and started moving large offensive formations to our border, the Indian Air force moved its strike elements forward and pilots waited in cockpits in fully loaded aircraft and the Indian Naval Fleet sortied twice out of Mumbai towards our coast. An hour after the President's arrival, high ranking officials from various Ministries and Armed Forces had gathered in a large room at the Army House. General Musharraf not showing any signs of fatigue convened the meeting and greeted everyone. As Director General (Analysis) I was tasked to brief the President about the Military situation and present recommendations. The situation was discussed and General Musharraf gave his directions. He ordered "full defensive safeguards with an offensive orientation under the nuclear overhang". This firm direction coupled with implementation along with political and diplomatic moves, dissipated the Indian aggressive designs and the Indian forces were forced to pull back. Throughout General Musharraf"s tenure, from my vantage point in the ISI and later as a Corps Commander, I saw improvements in many fields and Pakistan was moving in a very positive direction.

The Monetary policy was managed to kick-start the economy when it was trapped in low growth-low inflation equilibrium. Until FY 2005 inflation remained subdued but subsequently the inflation target slipped due to the uptrend in the global commodity prices as well as inefficiencies of wholesale and retail markets. The exchange rate remained stable throughout the period as excess net foreign savings were sterilized and reserves were augmented.

The cornerstone of the governance agenda was the devolution plan which transferred powers, responsibilities and financial resources from the federal and provincial governments to local governments headed by elected representatives. A new Police Order replacing the 19th century law was passed to modernize the force. The National Accountability Bureau (NAB) was established under a new legal framework as the main anti-corruption agency.

Despite difficult initial conditions in 1999, Pakistan’s economic performance under Musharraf has been impressive in terms of income per capita, debt reduction, employment generation and poverty alleviation. As a result of reasonably high GDP growth rate of about 6.3 percent a year the per capita income in current dollar terms rose to about $ 1000. GDP growth (3.1 percent in 2001/02) recorded 7 percent in 2006/07. Investment rate grew to 23% of GDP, the highest recorded ever in Pakistan’s history. Headcount Poverty ratio fell from 34 percent to 15 percent. Unemployment rate fell also from 8.4 percent to 6.5 percent and about 11.8 million new jobs were created. Public Debt was brought down from 90 percent of GDP to 58 percent. Gross and net enrolment at primary level improved and health indicators such as children immunization, incidence of diarrhoea and infant mortality showed favourable changes.

There is a popular belief that Pakistan’s economy prospered during this period due to a huge surge in capital inflows arising from Pakistan’s support for US intervention in Afghanistan. Even if we assume the extreme case that all official transfers, debt relief and all foreign loans/ credits represent the “gift” of September 11 to Pakistan, this combined amount represents only 10% of total Foreign Exchange Earnings of the country in FY-06. It would not have been possible to take advantage of the benefits offered by Sept. 11 in absence of the reforms mentioned. Research by a British economist found that the statistical evidence failed to relate these capital inflows with savings and investment, expenditure, imports, domestic and external debt, corporate profitability and boost in public investment. He concluded that “the episode of economic growth between 2002/3 and 2008/9 was better explained by a stronger government able to mobilize domestic resources, ensure that they were utilized productively and create institutions that were able to overcome the conflicts associated with economic development”.

The writer was Governor of the State Bank of Pakistan. He has also served as Dean of the IBA. Until recently, he held a cabinet position. He has also authored served books.