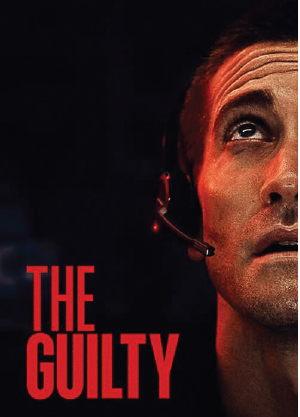 “Broken people help broken people,” says a line from the film ‘The Guilty’, an American crime thriller film, which revolves around a troubled LAP officer scrambling to save a distressed caller. Directed by Antoine Fuqua, it is a remake of a Danish Film with the same name, which came out in 2018.

The cast of the latest version includes Jake Gyllenhaal (Joe Baylor), Christina Vidal (Denise Wade) Adrian Martinezz (Manny), Riley Keough (Emily Lighton) and Peter Sarsgaard (Henry Fisher). Except for the first three, others are never shown in the film. They are revealed only through their telephonic conversation with Joe.

Shortly after the opening of the film, Joe Baylor (Jake Gyllenhaal) receives a call from an apparently distraught kidnap victim as part of his routine. At first, he is at odds to understand what the woman is talking about. However, he soon assumes that she is pretending to her kidnapper that she is talking to her child. So, he starts conversing with her in code and tries hard to help her.

Because of his own situation, Joe becomes personally involved. In trying to help her, he becomes quite unprofessional and goes almost crazy. He overstays his shift, ignores other calls, loses his temper and behaves strangely. What is the matter? Is the woman really kidnapped? And does Joe succeed in saving her? It is there for you to find out. 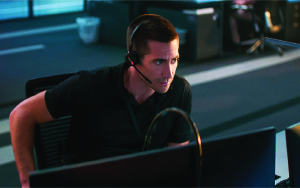 The main character Joe appears troubled and sick because, he has a broken marriage and has been demoted to a 911 operator from his job as a police sergeant because of his conviction for manslaughter about 8 months back. What’s more, he has a court hearing the next morning, which is possibly going to conclude his case and decide his future. So, during the course of the film, he repeatedly gets calls from a journalist, who wants to have his version of the story.

The shows reports on the fire in California, with helicopters hovering around. The raging fires and helicopters give the impression that the film is going to be marked by bustling scenes involving rescue operations by the police and army. In fact, it is a one-location film, made entirely in one place.

Because the film has been cast in LAPD, it shows only Joe’s side. So, sometimes the audience wish they could see what is happening on the other end of the call. This feeling is natural because they are watching a film, not reading a story. This can be counted a negative. However, Joe has compensated for that through his amazingly brilliant acting.

Joe, from the moment he receives the call, captures the attention of the audience; he keeps them spell-bound, and stuns them through his facial expressions and conduct. The way he exhibits emotions is really amazing. The expression of anxiety, tension and stress on his face is so natural that no one will say that his performance is lacking. He has played his role perfectly.

The music, which is almost pensive throughout the film, is suited to the scenes. It succeeds in creating the impression of seriousness. The plot has a good sequence but some critics believe it could have been better Joe makes up for that through his brilliant performance.