A Disciple: The Spiritual Path
to Infinite Happiness 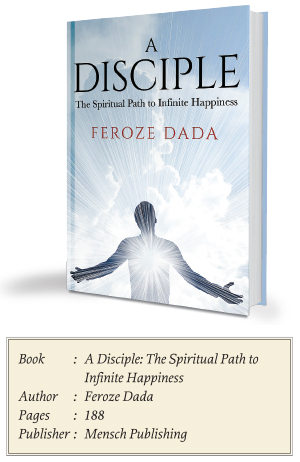 Not everyone is destined to embark on a voyage of spiritual self-discovery. Conventional wisdom dictates that superior knowledge about spiritual concerns is attained through self-abnegation, which is a delicate yet difficult path to tread. Awareness, however, doesn’t come to those who don’t consciously seek it.

As Feroze Dada states in the opening section of A Disciple: The Spiritual Path to Infinite Happiness, the teacher only makes an appearance once the student demonstrates an alacrity to learn. Dada’s new book documents his own journey towards spiritual self-discovery and enlightenment. At first glance, these concepts seem exceedingly subjective and philosophical, if not entirely nebulous. Even so, readers are advised against allowing their initial scepticism to colour their perceptions. A blinkered view of the subject will only impede their understanding of the book. To savour the essence of the text, readers are encouraged to transform themselves into potential seekers of a larger truth.

Duncan Baird’s foreword to A Disciple describes the book as “the heartening story of one person’s… spiritual path”. A statement of this nature not only highlights the autobiographical bent of the text, but also correlates its superior wisdom with the author’s personal experience. It is, therefore, difficult to analyze the merits of the book without understanding the author’s own spiritual journey.

Dada’s life was dominated by entrepreneurial pursuits until the day he visited his wife’s family in Myanmar. The trip radically altered his worldview as he played an active role in enabling a Buddhist monastery that was home to 1,200 orphans to become self-sufficient. In addition, the author embarked on a quest to find spiritual fulfilment through the guidance of his Sufi teacher and became a meditation practitioner. Instead of searching for answers in a chaotic world characterized by ambiguity, the author trained himself to look within himself and unearth the wisdom that was already embedded in his psyche. By reconfiguring his relationship with his inner self, Dada was able to open the portals of the hidden chambers of his heart and mind.

The process, though rewarding, was fraught with challenges. His ustad warned him that even though he had ventured forth on the “path of roses”, he would encounter the occasional thorn. With the tenacity of a keen learner, Dada remained determined in his endeavours and worked arduously to achieve wisdom. “Meditation was helping me become more aware of how my mind worked,” Dada writes, “But I noticed how my hopes and fears all too often attached themselves to my thoughts…[and] my ego continued to influence my actions.” As time went by, meditation became the avenue that helped the author discover unique avenues of achieving infinite happiness. Meditation was the catalyst to allay his fears and find the path to a fulfilling life

The conquest of happiness has inspired copious philosophical treatises and it is tough to specify a suitable method to obtain bliss in a realistic sense. In a world that is increasingly materialistic, dissatisfaction has become a problem that is in desperate need of a remedy. Dada’s suggestions to achieve some semblance of happiness cannot be treated as a foolproof strategy that will work for everyone. Even so, the approach carries a distinct validity - a fact that becomes amply clear in Dada’s book.

Richly intertwined with insights drawn from Sufi teachings and mythology, A Disciple is by turns a memoir on healing and sincere self-help book that doesn’t bear any unnecessary pretensions. Instead, the text reminds us about the value of self-improvement to ensure our spiritual well-being.