There is a need to take a neutral view of the policies of Gen. Pervez Musharraf and the intent of the reforms undertaken. 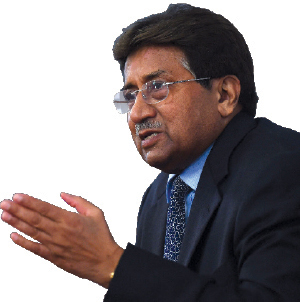 Economic security is the sole pillar on which rests the existence of any state. We are once again facing a problem similar to when Pakistan was at the brink of an economic collapse with its GDP at 3.7% and facing international sanctions as a result of the nuclear tests conducted in May 1998.Tthe government changed in 1999 and Gen. Musharraf took over. Then we were facing sanctions and now we’re under the watch of the FATF, hoping to get out of the grey list.

General Pervez Musharraf took reins of the country in difficult times when it was on the verge of default and international isolation. The events of 9/11 changed the geo-political situation of the region and brought Pakistan at the forefront in the War on Terror. Despite odds, the General tried his best to steer the country out of crises while dealing with the US invasion of Afghanistan, its impact on Pakistan and also working to improve the economic conditions of Pakistanis. He provided strong leadership and ran the affairs of the country with utmost dedication and honesty. During his years in power, Pakistan pursued consistent and favourable policies of liberalization, deregulation and privatization. Economic recovery, institutional reforms and good governance were the main priorities. As a result, the economy expanded at an average rate of 7% per annum during his last four years in power. Growth of large scale manufacturing registered an average increase of 11.31% per annum during the period from 2000-07. The exchange rate remained stable despite widening of trade and current account deficits. Foreign exchange reserves crossed the US$ 16 billion mark and per capita income had increased to $925. During General Musharraf's time, remarkable economic growth was witnessed with millions of jobs which resulted in the overall betterment in the lives of common citizens. His focus not only remained new job creation, but also various social sector improvements. The Higher Education Commission (HEC) is one example where remarkable progress was made to provide quality higher education. Furthermore, over 100 mega development projects were undertaken in his tenure including raising of Mangla Dam and Lyari Expressway, Mirani Dam, Gomal Zam Dam, Sabakzai Dam, Satpara Dam, Kachhi Canal, Rainee Canal, Greater Thai Canal, Gwadar Port, lining of watercourses, Mansehra-Naran-Jalkhad Road, Neelum-Jhelum Hydro Electric Project and lslamabad-Muzaffarabad Road, among many others. One other achievement was the trickling down of empowerment to the grassroots level through the local government system. Musharraf’s tenure resulted in many achievements and was a time of prosperity for Pakistanis and is remembered by the people of Pakistan fondly.

Shortly after General Pervez Musharraf came to power, his first priority was to repair the economy. Musharraf’s clear foresight on how to manage the economic mishandling of his predecessors led Pakistan out of the darkness. The allegations that the Musharraf regime pumped in US dollars directly into the economy is contrary to the facts. Pakistan remained under sanctions, until we joined the global War on Terror in 2001. Of the $10 billion Coalition Support Fund (CSF) provided to Pakistan between 2001 and 2008, 75% was for military operations and equipment up-gradation, and the remaining 25% was spent on social sector development including health, education, and infrastructure development. The belief that Pakistan was boosting its economy with USAID is actually not true.

Musharraf, with his carefully selected team of experts, took various measures for the country’s economic recovery. As a result, Pakistan’s GDP grew by 7% from $63 billion to $170 billion; foreign currency reserves from $800 million to $16.5 billion; external debt dropped from $39 billion to $37 billion, and Debt to GDP reduced from 102% to 53%. Revenue collection grew from $308 billion (1947 to 1999) to $1 trillion in seven years. Per Capita Income grew from $430 to $1000 and FDI from $300 million to $8.4 billion with exports rising from $7.8 billion to $17.5 billion annually. Remittances also rose from $1 billion to $6.4 billion and the budget deficit was brought down to below 4%. A circular loan scheme for farmers was initiated, which increased wheat production to 22 million tons from 16 million, and cotton production increased from 9 million to 13 million bales.

The exchange rate was maintained at Rs.60 to a dollar. The good economic performance resulted in an increase in financial allocation for the PSDP to Rs.520 billion in 2006. No wonder, because of the strong economic policies, in 2006, Goldman Sachs a global investment bank, included Pakistan in the category of new emerging market (Next – 11) destined to play a major role in the world economic setting. The result was that poverty levels decreased from 34% to 17% according to World Bank figures. The IMF’s last tranche of $400 million was refused, and we exited from IMF programs. Do we ever hear about this from our worthy commentators? It is as if they deliberately avoid mention, in awe of the so-called elected leaders, whose elections are invariably branded as being “manipulated”.

However, while the man on the street still expresses his admiration for Musharraf, it is only the ruling elite and politicians who question his credentials as a patriotic, forward-looking leader and merely focus on his shortcomings. It is natural for them to do so. Given that none of them can match his abilities and style, including his ability to face any challenge head-on and answering the toughest questions asked of him anywhere in the world.


There were dividends of the investment-friendly environment in Pakistan, despite the fact, that we were the frontline state against the terrorists, and a lot of intelligence and military operations were planned and executed to uproot terrorism from the country, mainly in its border areas with war-ridden Afghanistan. Musharraf succeeded in turning around the economy with the help of Pakistan’s private sector. His government always interacted/communicated with the private sector because he believed that they were the engine of growth. Constant engagement helped restore the confidence of the private sector in economic management.

The result was that investment rose from 17.4% of GDP to 22.9% – an increase of 5.5% of GDP in seven or eight years, which is unprecedented in the history of Pakistan. Foreign investment surged from $0.5 billion to $8.5 billion during that time – a 17-fold increase in 8 years, which reflected the growing confidence of foreign investors in Pakistan. Industries reporting significant profits were banking, telecommunications, media, oil and gas, airlines, real estate, and the automobile sector, creating millions of jobs and helping to slash the unemployment rate from 20% to 5%. The country’s debt burden was reduced to one-half. By the end of the 1990s, the national (public) debt of more than 100% of GDP fell to 55% by the end of Musharraf’s term.

There is a need to take a neutral view of the policies of Musharraf’s time and the intent of the reforms undertaken, and avoid the prevalent political views and commentary, which thrives on hyperbole, ill-informed opinions based on illogical premises, fed by lies, and desirous of catching the next headline, by hook or by crook. A lot of expectations are placed on history to give a clearer picture. So far, the picture is blurred as facts are manipulated.

Attiya Mahmood is a former diplomat while Amaan Tareen is a documentary filmmaker and media strategist.