Launched by the BJP government with much fanfare and flourish, the Agnipath Scheme is turning out to be a controversial move from day one. 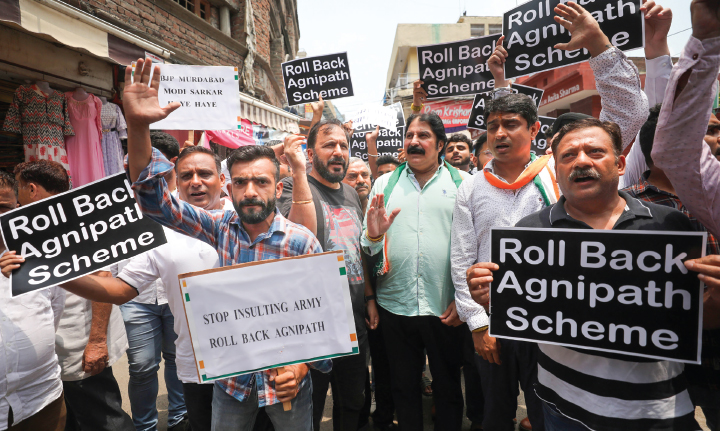 The Modi regime tries to gain popularity with changes and laws in the name of transition. It has already faced criticism for Citizenship Amendment Act (CAA), National Register of Citizens (NRC), 3 Farm Laws for farmers and many other disagreeable reforms. Lately, a new scheme, “Agnipath” is under debate and is facing violent protests nationwide. Agni means fire and Path means way. The new plan introduced by Modi will induct Indian has nationals aged 17.5 years to 21 years. The inductees under this scheme will be called “Agniveers,” (fire breeding warriors). The scheme under the overall concept of Tenure of Duty (TOD) suggests that successful candidates, or the Agniveers, will join the armed forces for a period of four years, after which only 25% will be retained. With a mere six months of training, they will be sent to augment the regular armed forces.

Considering the high unemployment rate and global economic crises after the Covid-19 pandemic, Modi’s ploy should have received some appreciation but surprisingly as the facts of the plan are exposed, Indian youth have begun agitate. There are protests against the scheme for the fact that 75% of the youth sent back to their homes after four years of service will be jobless. They will have spent four important years of their lives serving the armed forces. This will not only deprive them of the opportunity to continue their studies but also the post-retirement privileges that any regular troop is eligible for. They want regular induction against which they may receive perks and privileges to sustain themselves. But this is not the only flaw in the scheme. Its dark side is quite vivid.

Technically viewed, the quality of manpower with short-term training is also going to be questionable. Will the troops, so hastily trained, be reliable for a hefty job involving expected conflicts with the professional armed forces of countries like China and Pakistan? This is especially worth pondering in case of the navy and air force, which are technical quite.

Soldiers are conditioned to fight wars and their motivational level is specifically and constantly worked on. One wonders what the motivational level of troops will be who know they are inducted for four years only and shall have to ultimately leave. With this scheme, they are inherently deterred from performing their jobs as per requirement. Will they be ready to sacrifice their lives to defend their country? The overall morale and motivational level of Indian armed forces is certainly going to be adversely affected. Also, these agniveers, with low motivational level, will constrain regular troops to also look after these tasks. They may, therefore, be a drag on the resources and performance of the Indian armed forces. With the chances of only a quarter to stay put in the armed forces, there will be fierce competition amongst the candidates. They are likely to resort to various unethical ways and means to secure slots at any cost. More so, there will be polarisation in the forces as there will be two streams of induction. Agniveers will be looked down upon by their regular entry peers and in fact will never be acceptable to the fraternity. This will certainly cause dejection amongst agniveers at some stage.


The armed forces personnel are by default privy to a fair amount of confidential information during the course of their duty. The agniveers will certainly carry some amount of such information. How will Indian armed forces avoid leakage of vital information is a question to be answered. The men trained under this scheme will undergo basics of the profession and will at least learn how to handle firearms. This big chunk of trained manpower when it becomes unemployed shall be a good catch for the terrorists or mercenaries. The scheme would serve as nursery for such organisations. The fascist and saffronized state that Modi is making has already created fear among Muslims, Sikhs and other minorities.

Socially, these young agniveers will suffer a lot more. First, their induction, owing to its interim nature, will not be looked upon as something notable in society. Second, when they are finally out, it will be a fiasco for them to adjust in the community. They will not only have to find a suitable job but their nuptials will also be an issue. These individuals will therefore be isolated and may land easily in the hands of proscribed organisations and miscreants. They may also resort to crime to sustain themselves thus increasing the overall crime rate across the country. After spending a major chunk of the defence budget on these agniveers, certainly other government officialdoms will raise a voice for their training and expenditures. Is the Indian State ready to be challenged by other departments and fulfil their demands?

Induction in the armed forces is a passion amongst the youth of any country, and so it is in Pakistan and India. Boys and girls dream of joining the armed forces right from an early age and aspire for it throughout their educational careers. There is a pride, passion and glory which they find in this profession. Armed forces also look after their personnel even after their retirement. Even the families are well taken care of and there is always a feeling of fraternity that is enjoyed by someone who has served in any branch of the armed forces. But Agnipath is robbed of any such sense and that is what is agitating the minds of Indian youth.

The writer is associated with the Institute of Regional Studies, Islamabad. She has interest in international politics and South Asian security dynamics and can be reached at reema.asim81@gmail.com