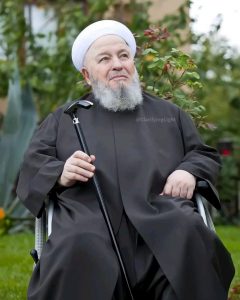 When it comes to the advancement of Islam in the contemporary Muslim world, historians, religious scholars and researchers can’t ignore the name of the leading Turkish scholar, Mahmut Ustaosmanoglu, commonly known as Sheikh Mahmud Effendi. He was the first figure in the whole Islamic world to have propagated the Sunnah and Taqwa both theoretically and practically since Effendi he was ‘the man of Taqwa’.

Hailing from Istanbul in Turkey, Mahmud Effendi spent his whole life in the service of Islam, humanity, and peace. He worked so ambitiously and enthusiastically that it was almost impossible for others to keep pace with him. He was born in 1929 C.E. in a small village called Mico (Tavsanli) in the province of Trabzon. His father, Ali Effendi, the son of Mustafa Effendi, and his mother, Fatima Hanim Effendi, the daughter of Tufan Effendi, were highly respected people known for their spirituality and piety. Mahmud Effendi, under the guidance of his parents, memorized the Qur’an when he was just six years old. Although he was still a young boy, he used to perform prayers in the mosque and gave great importance to extra worship and non-obligatory prayers. From his childhood, he was such an influential and inspirational person that the people in his village named their children “Mahmud” in the hope that they, too, would be like him.

After receiving primary education from his parents, Mahmud Effendi travelled to Kayseri in pursuit of Islamic studies and learned the basic rules of Persian and Arabic languages like Sarf and Nahv from Tesbihcizade Ahmet Hodja Effendi, who was an esteemed scholar in that region. After remaining in Kayseri for a year, he returned to his home village and studied Qira’at from the most renowned Qira’at scholar of that period, Mehmed Rusdu Asikkutlu Hodja Effendi. He learned the sciences of Balaghah, Ilm al-Kalam, Tafsir, Ilmul-Hadith, Usul al-Fiqh, and other Islamic sciences from Calekli Haci Dursun Feyzi Effendi, the senior Professor of Sulaymaniyah Madrasah, and a distinguished and specialized scholar of intellectual and rational sciences.

Mahmud Effendi completed his studies with distinction when he was just 16 years old. After the completion of his studies, he married Zehra Hanim and was blessed with three children, Ahmad, Abdullah, and Fatima. After the death of Zehra Hanim, he married Muserref Hanim, the daughter of Sheikh Mansur Baydemir Effendi, who was a notable and highly-esteemed person from Kahramanmaraş.

In June 1952, Mahmud Effendi went to Bandirma for his military service; it was during this time that he met his spiritual teacher (Murshid) Sheikh Ali Haydar Ahiskhavi al-Naqshbandi al-Khaledi (d. 1960). Ahiskhavi al-Naqshbandi al-Khaledi was one of the great scholars of Turkey, and spiritually a sound person and was knowledgeable about the four main sects and was capable of delivering Fatwa for each of them.

Ali Haydar Effendi used to tell his followers who had surrounded him regarding Mahmud Effendi, that ‘there is a soldier here in Bandirma, find him, and bring him to me’. Heeding this call, they began to search for the soldier in Bandirma. But this was a very difficult task, as this soldier had no name, surname, or address. Mahmud Effendi himself explains that “I always had, from a very young age, great affection for visiting scholars and sheikhs. Whenever I heard of a scholar or one of Auliyyah, I visited them”, and, on one occasion, he finally met Sheikh Ali Haydar.

After completing his military service in 1954, Mahmud Effendi was appointed as an official Imam of the Ismail Agha Mosque in Istanbul, where he remained until his retirement in 1996. In 1960, after the death of Sheikh Ali Haydar Effendi, a new era with glorious responsibilities began in Sheikh Mahmud Effendi’s life. He was busy working with the community as an Imam, as well as being involved in imparting Islamic education. Many scholars of the Muslim world took lessons and guidance from him. During the continuous conflicts between the right and left-wing groups, before the coup of September 12, 1980, Sheikh Mahmud Effendi told the people, “Let’s perform Jihad, and it is our duty to revive people by enjoining the good and preventing the misdeeds; it is not our duty to kill people”. He tried to calm the people and was successful to a great extent.

In 1988, Mahmud Effendi visited Damascus, and Syria for the first time, and in 1992, he travelled to England and Germany to convey and deliver the message of Islam. He also travelled to Bukhara and visited the tombs of Islamic scholars there, negotiated with the eminent scholars of these regions, and debated the different contemporary discourses. In February 2005, Sheikh Effendi travelled to India to visit the tomb of Imam Rabbani Mujaddid Alf-i-Sani Sheikh Ahmad al-Farooq al-Sirhindi and various other honourable Islamic scholars such as Khaja Baqi Billah, Sayyed Nour Muhammad Badauni, Mirza Mazhar Jan-i Janan and Shah Abdullah Dahlawi. In addition to travelling to every region in Turkey, Sheikh Mahmud Effendi also travelled to the Middle East, Central Asia, and Europe to convey the true message of Islam. He performed Hajj and Umrah several times throughout his life. On his most recent visit, in April 2011, he performed Umrah, together with his over 50 thousand followers – something which has not been witnessed for centuries.

Sheikh Mahmud Effendi’s outstanding knowledge of the Sunnah, his profound understanding of the Shari’ah, and his Islamic demeanour, as a whole, have made great impressions on both the scholars and learned members of the Islamic world. Sheikh Mahmud Effendi had justifiably taken up a leading position in the Islamic world and had been honoured with the admiration and affection of people from all walks of life. He presided over so many Islamic scientific sessions and symposiums and encouraged people to obtain knowledge and to act according to the Sunnah of the Prophet Mohammad (PBUH).

In 2010, approximately 400 renowned Islamic scholars came from 43 countries to negotiate the different contemporary discourses and challenges that emerged in Islamic thought in Istanbul and on that occasion declared Sheikh Mahmud Effendi as the Mujaddid (reviver) of the 21st century and presented him with the “Outstanding Service to Humanity Award''. After devoting his whole life to the service of Islam, Sheikh Mahmud Effendi, at the age of 93, died on June 23, 2022.

Mahmud Effendi’s sermons, which he had given regularly for over fifty years, covered multi-dimensional aspects of Islam. His sermons have been collected and archived by his followers and six volumes have been published. The most original and beneficial work of Sheikh Mahmud Effendi is the translation of Holy Qur’an in Turkish, titled “Qur’an Majeed”. Another most voluminous work by Sheikh Mahmud Effendi is the interpretation of the Qur’an in Turkish titled “Rouh al-Furqan”.

Sheikh Mahmud Effendi established various religious, social, and charity organizations, such as ‘The Mujaddid Mahmud Effendi Foundation’, ‘The Marifet Association’, ‘The Federation of Marifet Associations’, and ‘Ahle Sunnah wa al-Jamaah Confederation’. The organizations give service in the realms of education, culture, scientific research, health, charity, and national and international social organizations. He also published a monthly scholarly and cultural magazine named “Marifet”. Mahmud Effendi, truly a messenger of peace and brotherhood, was keen on developing relationships and enhancing cooperation, particularly among the Muslim nations. He has left millions of his followers and lovers across the world.

The writer is a columnist and researcher. He can be reached at Khalid6484@bgsbu.ac.in