Owing to an extreme shortage of teachers, the young lot of Mirpur Bathoro has now come forward to teach voluntarily at government schools. 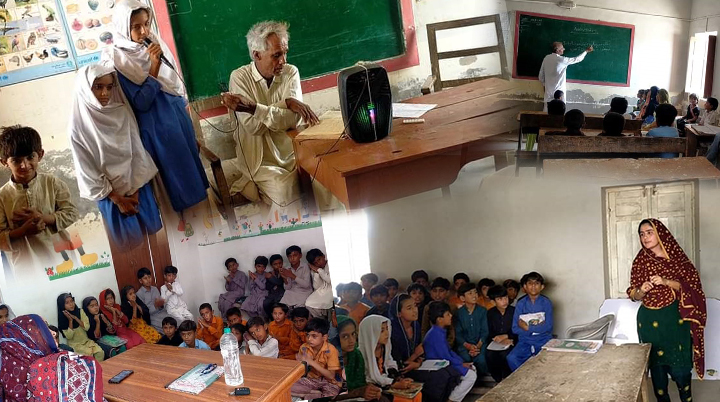 For the sake of the bright future of their children, the youth of the Mirpur Bathoro, a small town of District Sujawal also known as Vietnam of Sindh, have taken a commendable initiative of voluntarily teaching at the government schools that were earlier closed owing to an extreme shortage of schoolteachers.

In more detail, around 300 primary schools are closed in Mirpur Bathoro Taluka of District Sujawal, owing to the dearth of schoolteachers and other basic facilities.

This is said to be a distinctive initiative taken by the youth of Mipur Bathoro taluka for promoting education and bringing about a social change on their own. Mirpur Bathoro has produced well-known literary figures such as Ghulam Hussain Rangrez, Shoukat Shoro, Muhammad Iqbal Khwaja, Ismail Suho, and Allah Dino Khaskeli. The last-mentioned was known for organizing literary events in the area and encouraging the young lot to participate in healthy activities. However, as time passed by, the tradition lost its glory but once again the young educated people of the area are now coming forward in droves to fill in the educational and cultural vacuum.

Ambreen Raho, a resident of a small village called Ghul Muhammad Raho, has been teaching at the primary school of her village for the past 18 years and that too without any remuneration.

"I stepped forward to educate children of my village when a female teacher got an early retirement," says Ambreen. According to her, she feared that the district education department would then close the school owing to the shortage of teachers in the area.

She told this scribe that she had received lots of appreciation from the people of different segments of life but at the same time, she is braving severe criticism from those who do not want to see an educated society emerging with all its literary sheen and enlightenment.

Rising to the occasion, Ambreen soon emerged as a role model for the rest of the young girls of the area who later started teaching voluntarily at the primary and secondary schools in their own villages.
Sanam Zaur, 27, says she has been teaching around 80 students of 1 to 5 grades without any stipend at the government school of her village named Ghul Hassan Zahur.

At the Government Girls Middle School of Village Kaman Memon, two sisters Afshan and Khursheed Memon are rendering their services selflessly. By the same token, Abdul Sattar Memon, a young boy hailing from the same village, has started teaching voluntarily at a school for boys located in the same vicinity.

Such volunteer teachers as Muhammad Hathiyar and Ayoub Hathiyar engage their students in extracurricular activities as well. According to Ayub Hathiyar, he reads aloud the selected poetry of Shah Abdul Latif to the students every morning and also explains to them the meaning of those verses and couplets to arouse their interest in poetry and literature.

Of late, a delegation of officials from the Mirpur Bathoro Press Club visited these schools to acknowledge the selfless work of the young volunteer teachers who are paving the way for the bright future of the children of the area.

The writer is a freelance contributor. He can be reached at kamran.khowaja338@gmail.com