In eastern societies like ours, an inherently negative attitude towards the transgender paves the way for their exploitation, discrimination and abuse. 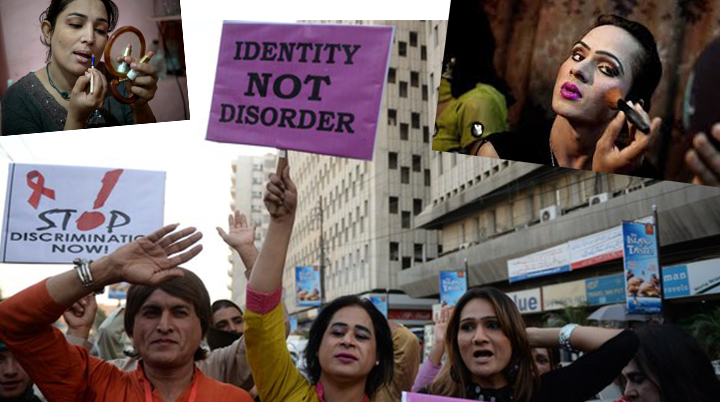 The meaning of the word 'Transphobia,' as defined in the Oxford Dictionary, is hatred, dislike and unfair treatment meted out to transgender people. The phenomenon, in more detail, refers to a range of negative attitudes, or condemnable actions directed towards transgender persons. However, no appropriate term has yet been concocted to describe transphobia in a country like ours where transgender are openly discriminated and are subject to different forms of violence out in the open and that too often.

More's the pity, the rampant discrimination against the transgender community has now reached the level of absolute shame as killing, hurting and abduction of transgender community members has become a ubiquitous norm in our society. The province of Khyber Pakhtunkhwa leads the way where in March alone, two transgender persons were shot dead and two injured in the city of Mardan, while five were shot injured in Mansehra. More than 70 transgender persons, according to unofficial estimates, have been killed in Khyber Pakhtunkhwa since 2015.

When compared with other genders, transgender community, historically speaking, has been subject to a different kind of treatment and has seen more ups and down, particularly in the South Asia region.

During medieval period and under the Mughal rule in particular, transgender, commonly referred to as Khwaja Sira, were given a special status, enjoying power and prestige in the royal courts. Khwaja Sira were largely appointed as the custodians of royal harems. There are also many references in history about the appointment of Khwaja Sira as military generals, governors, judges, teachers and royal aides.

Amongst them, Etimad Khan and Firoz Khan were the most renowned and powerful, whose tombs are still present near the city of Agra in India. Then, under British rule, the existence of eunuchs or transgender was deliberately suppressed and denied by the 1860 Penal Code and the Criminal Tribes Act of 1871. The ensuing outcome of such discriminatory legislations targeting the transgender people is grossly manifest in our society in the form of social discrimination and stigma which typifies the very existence of transgender community.

To bring transgender at par with other genders, various measures have been taken after the creation of Pakistan as an independent state in 1947. Interestingly, Pakistan is one of those countries which has officially recognized transgender as the third gender. Under the Transgender Protection of Rights Act 2018, trans people can choose their gender identity which is duly mentioned on the NIC and passport. Nevertheless, transphobia is still rampant here in its deadliest form and is continued unabated with impunity.

In eastern societies, no one can deny the role of a family in the development and upbringing of their children. Yet, in Pakistan and probably in the entire South Asian region, an inherently negative family attitude towards the trans people paves the way for their exploitation, abuse and discrimination.

In most cases, family members tend to completely disown their children when they are born with genital anomalies. To avoid the wrath of a social boycott, such children are given to the members of the same gender who usually live together under the supervision of a guru. For transgender, their employment options are very limited as they are normally hired for dancing, prostitution and begging. As seen in most cases, shockingly, their biological family members who don't even take part in the burial of their transgender siblings, get blood money through settlements with the killers of transgender family members.

Briefly put, the rules and legislations enacted for the rights of transgender people are very important. However, their families need to brave the social criticism by owning their trans-children as without doing this the societal behaviour will never change.

Imtiaz Ahmed is a freelance writer based in Islamabad. He can be reached at ahmedimtiaz2609@gmail.com