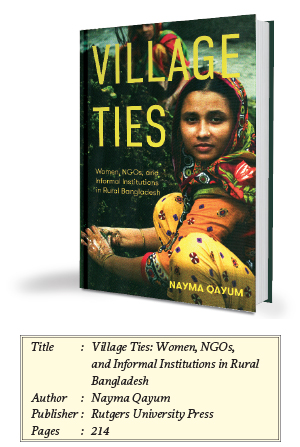 The quest for social change in the Global South is a knotty endeavour as it is often difficult to find the most appropriable means to achieve the desired development goals. As a result, the grassroots mobilization programs initiated by NGOs cannot be steered by a myopic vision.

More often than not, NGOs tend to advocate practices of neoliberal development. Entities that blindly adhere to this notion tend to target their services towards the ‘rational individual’ who enjoys an unfettered decision-making power. This is a flawed concept as it overlooks the pre-existing power relations within the social milieu. The stark reality is that patriarchal norms inhibit women from making crucial decisions about the services offered by NGOs.

At its core, Nayma Qayum’s Village Ties: Women, NGOs, and Informal Institutions in Rural Bangladesh offers an astute critique of development programs that are governed by neoliberal ideals. The author, who is an associate professor at New York’s Manhattanville College, argues that people are moulded and constrained by their social fabric and its entrenched power dynamics. According to Qayum, informal institutional impediments in rural societies within the Global South create challenges for women to make independent choices on how to utilize the services offered by grassroots development initiatives.
Using the example of BRAC’s Polli Shomaj (PS) that operates in Bangladesh’s rural areas, Qayum reveals that programs geared towards securing collective interests are far more effective in spurring an institutional change. However, these initiatives must be embedded within local communities, reflect deliberate decision-making and reject any form of oppression as its primary goal.

It isn’t surprising that the author has opted to use Bangladesh as her case study. The country, which was billed as the poorest nation in South Asia at the time of its independence in 1971, has now witnessed significant economic growth over the decades. In Village Ties, Bangladesh’s journey from penury to plenty has been used as a lens to recognize and analyze the role of women in the country’s development. In a similar vein, Qayum has focused on the Polli Shomaj as women affiliated with this initiative have invariably deviated from the cliched and egregiously false narrative of victimhood. In fact, they have actively sought to fuel social and political change by waging a battle against the prevailing injustices within their communities.

Village Ties engages critically with two pivotal major themes. The first pertains to whether development programs can trigger an institutional change in the rural areas of the Global South. The second deals with the extent to which such development programs can alter the equation that rural women have with the state and the social milieu. These are valuable concerns that lend a much-needed direction to Qayum’s study of the Polli Shomaj.

The author presents compelling insights on how women’s movements in Bangladesh have lost their nationalist fervour and have instead become excessively NGO-driven. Qayum also paints a favourable picture of the role of NGOs in rural societies and reveals how such entities can manoeuvre through the complicated mesh of informal institutions to achieve their ends.

At the same time, Village Ties reasserts the role of women in steering development in Bangladesh. Qayum’s study has also draw attention to the Polli Shomaj’s efforts to combat violence and child marriage among other concerns that assail women in rural societies.

With its skilful use of a diverse blend of methodologies, Village Ties highlights the significance of empowering rural women. The book also serves as a meditation on how those who are on the brink of marginality continue to thrive against all odds.