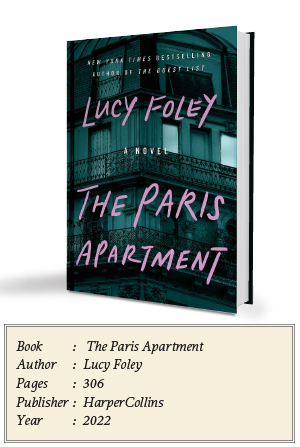 British author Lucy Foley has made quite a name for herself in crime fiction, especially with her novels preceding The Paris Apartment, The Hunting Party and The Guest List. Set in a discreet and highly expensive quarter of Paris’s Montmarte district, the action of this book takes place predominantly in an apartment building that boasts four levels, with a large apartment occupying each one. Fans of Agatha Christie’s country house murder milieus will be delighted by this setting, which in its own way is just as sinister and arguably spookier, by virtue of being more contained.

Investigative journalist Ben Daniels is waiting for his half-sister Jess to cross the Channel and visit him, when he falls victim to a vicious attack by an unknown assailant. Arriving shortly afterwards, Jess relies entirely on her wits to enter the building and makes her way to Ben’s apartment, where she discovers he is missing. Having been raised in foster-care that was less privileged than that to which Ben became accustomed, Jess adapts remarkably speedily to her environment and decides, due to sibling loyalty, to discover what has become of her brother.

And what an environment it is to be sure! The aged concierge is nothing short of a wizened witch from a fairy-tale, the owners of the building are an ostentatiously rich tycoon and his incredibly well-groomed and haughty wife, and bringing up the rear are two younger men (one rough and brutal, the other tamer) plus a batty young female artist of nineteen. Everybody except Nick, a friend of Ben’s (and the nicer of the young males) does their utmost to make Jess feel unwelcome. Not to be daunted, however, she ensconces herself in Apartment 3, and snoops around the building looking for clues as to her brother’s whereabouts.

The writing is moderately paced, which is to the book’s advantage, since there are few things more pathetic or slipshod than mystery plots which feel rushed. It takes Foley two hundred pages to build up to a family mystery at the heart of the plot. While it would be foolish, not to mention cruel of me, to divulge more spoilers, I will add that that mystery is in and of itself as satisfying as discovering what happened to Jess’s brother. There is a sexual sub-plot uncovered in the latter half of the book, which is reminiscent of Stanley Kubrick’s sublime ‘Eyes Wide Shut’ but Foley is tasteful and discreet about the way in which the sexual activities of this elite club are portrayed. This is just as well since taste and discretion are major watchwords for the novel. Although dubious parentage, psychological disorders, ugly snobbery and Oedipal complexes lie at the heart of the book, outwardly the façade remains veneered with all the cover-up and gilt paint that a multi-million dollar wine business can buy.

Jess befriends a journalist acquaintance of Ben’s named Theo who reports the disappearance to a high ranking police official deliciously named Blanchot (this was the name of Jacques Derrida’s real-life mentor). However, the French police officers are even more lazy and corrupt than British ones. It falls to Jess’s lot, therefore, to unearth what the relationships between this motley crew of spoilt rich characters are, and act as an unlikely, but effective, agent of justice in the novel.

Well-written, well-structured and an utterly satisfying read, the novel (like most of Christie’s) avoids undue clutter and complexity so that the reader can enjoy the skillful manner in which the diverse plots unfold. A step above a beach read, and a wonderful way to spend a weekend, Lucy Foley’s novel does not disappoint. Many writers are currently being touted as the next Agatha Christie but the laurels may eventually be rightfully earned by the creator of The Paris Apartment.