Pakistan in an Age of Turbulence 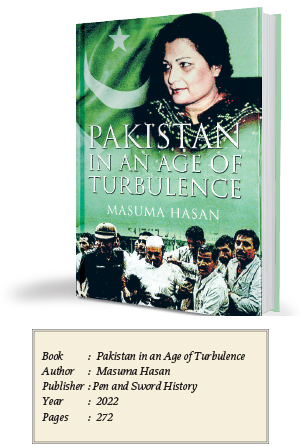 Masuma Hasan is a leading Pakistani scholar and former diplomat. She has recently written her memoirs, ‘Pakistan in an Age of Turbulence.’ She looks at political movements in Pakistan through her husband, Fatahyab Ali Khan’s involvement in them which brought her in contact with many other politicians who fought for democracy and fundamental freedoms.

Fatehyab Ali Khan was the president of the Pakistan Mazdoor Kissan Party. He had been in the forefront of all democratic movements in Pakistan and was a prominent leader of the Movement for Restoration of Democracy against the dictatorship of General Ziaul Haq. He was also the first president of the students union of Karachi University and was convicted and externed by General Ayub Khan. The book traces the upbringing, education and career of a woman from a privileged and liberal background who, despite all odds and patriarchal values, rose to top positions in governance and international diplomacy and became the cabinet secretary of her country. In those unusually pressing times, she had to balance her hectic private life with public responsibilities, which were always under scrutiny, a personal struggle which she vividly describes.

The author is the first Pakistani woman to be armed with a PhD in Economics and Politics from the University of Cambridge. At the peak of her career, she became Pakistan’s Permanent Representative at the United Nations in Vienna, representing the country at all international agencies, including the International Atomic Energy Agency. In the book, she has dwelt on the events of violence which Pakistan has witnessed and which she finds not so different from the hostility and rage that has spread in many parts of the world in one form or another.

She argues that social change in Pakistan has created space for an assertive and vibrant civil society, transformed existing power relationships and given rise to new styles of leadership among the youth. The author further expects the youth to influence the direction and dynamics of further change as a new synthesis emerges between traditional and modern values. They have already made their mark on many aspects of national life, such as politics, social change, human rights, art and culture, literature and music.

It may be noted that Masuma Hasan, was elected to the chair of the Group of 77 and China at the UN in Vienna, and later became cabinet secretary, the head of the civil service, during General Musharraf’s rule. Currently, she is chairperson of the Pakistan Institute of International Affairs (PIIA), the country’s oldest think tank, and president of Aurat Foundation, a leading women’s empowerment organization.
‘Pakistan in an Age of Turbulence’ has brought together significant strands of change and progress in Pakistan, such as advancements in the urban sector, the achievements of women in Pakistan, progress in education and culture and various prominent professions.

It clearly mirrors the modern and contemporary history of the Indian subcontinent, and the dramatic birth-struggles of both the states dominating South Asia. The complex racial, religious and ethnic mix was central to turbulent politics and Islamic identity in the subcontinent. The huge upheaval and tragedy of Partition is at the heart of the story with the flight of an influential Muslim population. It forces the reader to ponder on how Pakistan was formed as a new state, liberal in form but Islamic in confession.

The book has sharp and decisive insights, including the promise and tragedy of the Bhutto era, which brings forth a lot of ground realities, the excesses and cruel extremism of Ziaul Haq’s regime, and the struggle of the return to democracy in Pakistan. It has many other interesting political vignettes, including her meeting with Saddam Hussein and former prime minister Shaukat Aziz confiding in the author about Nawaz Sharif’s role in the Kargil war, oppression by General Ziaul Haq, Bhutto’s slogan of ‘socialism’ and his tragic end.

It may be a coincidence that ‘Pakistan in an Age of Turbulence’ was released at a time when Pakistanis were struggling against the most troublesome turbulence in their national existence since 1971, when the country was broken into half. Pakistan has had a turbulent history. Perhaps the country’s constant entanglement with turbulence seems to be one of the reasons why the book was written.