Western feminism morphing into aimless liberalism. Is it the right direction for women? 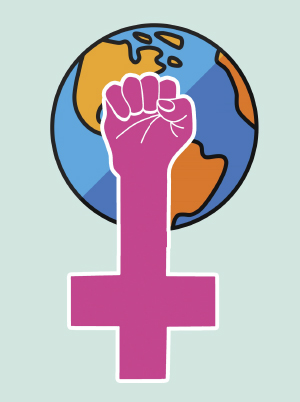 The world is made up of various cultures and societies. Within them, multifaceted divisions based on race, class and ethnicity are at play. Gender discrimination, a dilapidating oppression, is a scourge that primarily targets women. Post-9/11, the West has formed and forced a malicious narrative. It identifies Islam with two evils, terrorism and repression of women; both are strictly forbidden in Islam. This demonization fostered for political aims has become the means to genocide and furthering political and imperialistic agendas.

What the West, a hostage to these fallacies, does not comprehend is that cultures and societies are not universal in nature. American theologian Reinhold Niebuhr calls it “the bland fanatics of Western civilization who regard the highly contingent achievements of our culture as the final form and norm of human existence”. Since the Crusades, the West has regarded the Mediterranean Sea as the frontier against Islam. Western countries now see this “alien religion” thriving within its very own boundaries. This has led to a severe backlash faced primarily by non-white women throughout Europe and in the United States.

Claiming to be the global torch-bearer of “liberating” women, the US has seen Western feminism morph into sexual freedom and anti-life movements within its shorelines. This has resulted in erosion of family systems and legalization of abortion in parts of the US and Europe. This gory practice, akin to female infanticide, is what Islam called a great sin and strictly forbade more than 1500 years ago.

The stark failure of this Western feminism can be gauged from the fact that around 213,000 females are sexually assaulted in the US each year. This averages to one rape every 2 minutes. The quickest way to destroy society is to wreck the family system. Sexual freedom has led to marriage being branded as repressive and obsolete. This has resulted in a documented 40 percent children being born out of wedlock in the US; just one fallout of the vagaries of Western feminism.

Not confined to women alone, the US Justice Department admitted that 216,000 male inmates were raped annually in US penitentiaries. This gives the US yet another dubious title of being the first country in history where sexual assaults on men outnumber those on women. This abhorrent travesty has no takers. Sociologists and theologists now view Western feminism as antithetical to women rights. They assert that radical feminists are anti-family and agains gender-roles that are an imperative to families and societies. Western feminists view family as the basic repository of gender oppression with males as the bourgeois and women as the proletariat.


In the exclusive club that Western feminism has become, the personification of liberated females is do as you please beautiful thin white women from the middle class. The feminist movement in the 60s, apart from claiming women rights, saw men as fellow victims of societal pressures. It had empathy for males who shouldered the pressures of family livelihood. Today, all males are generalized as villains; the slightest vibe against this sweeping mindset is branded as vile misogyny. This trend has gained momentum, given the immensely far and global reach of social media. In fact, there is an inherent sexism in the way Western Feminism operates.

The West regards Mary Wollstonecraft as the Mother of Feminism. In 1792, she authored “A Vindication of the Rights of Women”. It is regarded by western activists as the earliest and most important treatise calling for equal women rights. Recently a statue was unveiled in London to honour her. Designed by Maggi Hambling, it is a silvery nude young woman dubbed by her as the “everywoman”. Women have called it a “betrayal of feminism”, “disrespectful” and an “outrage”.

In Pakistan, we have had the distinction of electing a woman, the late Benazir Bhutto, to the highest office of the land. This is something even the United States has not achieved. Does this symbolize our reverence for the females of the land? It does not. Women are victims of discrimination, excess and manic chauvinism. Honour killings, marriage to the Quran, disfiguring by acid, rapes, harassment and forced naked parades are macabre practices of the pagan era. They plague us in this day and age.

These are the grave ills we have to focus on and subdue collectively. Nothing could be more damaging for this great cause than making it contentious with provocative slogans like “my body, my choice”. An objectification of an individual’s body, it stalls the efforts of those fighting to alleviate the lives of women. The greatest setback is that it strengthens and plays into the hands of those who lump eradication of all the afore-stated ills to this slogan. These are the ones who want to enforce their convoluted perception of women as being merely child-bearing contraptions mandated to remain uneducated and slaves to man; they are the ones we have to counter collectively.

There is no such thing as the propagated myth of a global sisterhood bound by the slogan of “my body, my choice”. Meyda Yegenoglu, Professor of Gender Studies at Duke University, calls it, “a particular masquerading as a universal”. Western feminism, a value system alien to us, is dictated whereas it has failed in the West. We should address the many problems faced by women here and respect their choice of not sharing the identity and cultural goals of Western feminism. For women in Pakistan, religious and family values are as important as their rights. This should be the bedrock on which we collectively work towards forging a just, inclusive and equitable society.

The writer is a freelance contributor and can be reached at miradnanaziz@gmail.com