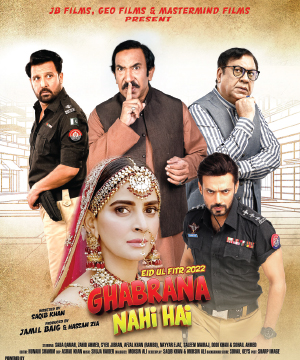 Saba Qamar (Zoobi), Zahid Ahmed (Sikander Hassan) Syed Gibran (Vicky), and Bhai Mian (Nayyer Ejaz) are the central characters in the film Ghabrana Nahi Hai. The title is a cheap take on the words of a politician. Obviously, the only purpose of the title is to exploit the popularity of the words.

The plot revolves around the tussle of a father and daughter against injustice on a piece of property.

The film opens on the sound of wedding bells. Zoobi is tying the knot. With whom? That is for you to find out. She fires a pistol shot in the air, leaving the audience startled! Whose blood has been shed?

The scene shifts to Zoobi and her father. Zoobi intones words of how a son is desired over a daughter. A girl’s marriage is really the funeral of her desires, highlighting the inequality between genders in society.

Vicky, Zoobi’s cousin is madly in love with her. The audience breaks into a peal of laughter when Zoobi addresses Vicky as Vicky Bhai!

Vicky cannot understand Zoobi’s desire to be a man, not react to his attraction.

The film moves from a serious tone to a scene in a lighter note.

The film bursts into a song that features about the intensity between the two.

Cupid strikes the three! Who will get whom? I will not break the suspense.

How do Sikander and Zoobi meet? Zoobi leaves for Faisalabad, with the dream of becoming an actor. Whilst she is giving an audition, the boss, the casting director, tries to exploit her.

He speaks the title line of the film:

Zoobi in a frenzy of fury takes him to the police and that is where she meets Sikander for the first time.

Sikandar immediately falls in love with her.

From her blunt, courageous quality to the tenderness of her heart, she is a perfect combination of fire and water.

What is your standard for choosing a man for yourself?

She says it must be someone who will accept her with her flaws and not try to change her.

Zoobi questions Sikander’s integrity and duty of respecting the uniform.

She wants justice and won’t settle for anything less.

Meanwhile, Bhai Mian, is lured into a trap by Sikander, Vicky and Zoobi to make him return her father’s piece of land.

With the help of two Chinese individuals and their interpreter, Bhai Mian is offered 5 million dollars in exchange for vacating Zoobi’s land. Zoobi plays an imposter in the form of Jehanara, Bhai Mian’s ex-wife.

Bhai Mian is so overpowered by the beauty of Zoobi’s drunken stupor that he agrees to her wish but in exchange for her hand in marriage.

Here, Saba’s acting is phenomenal. The way she moves from one character to another is remarkable.

The costume design in the film is also noteworthy. It is in sync with current fashion and simple and elegant!

Zoobi shops for Sikander, picking clothes that he can afford. Her resilience and wisdom overwhelm the viewer.

Jehanara the imposter sings a ghazal for Bhai Mian.

It is beautiful! Jehanara takes Bhai Mian into her clutches with her melodious, heart-wrenching poetry.

Who and what is Bhai Mian really?

Will Bhai Mian be defeated? Will Zoobi get justice? Who will Zoobi marry? Vicky or Sikander?

Will the scheme to defeat Bhai Mian work? Is it his greed for money or his provocation through Jehanara? It is a family comedy coupled with heart-rending moments.