Zain Saeed invites readers to imagine a world of pop culture. He shows how this culture has impacted young Pakistanis through his first novel ‘Little America’, published in 2021. In this exclusive interview with Sara Danial, Saeed talks what his readers can expect in the future. 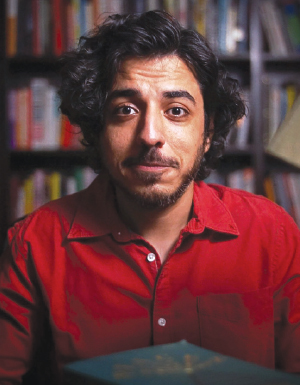 Does story-telling come naturally to you? Was it an innate art? Or would you rather say that you grew into it from childhood?
I have always had a wild imagination. As a child, I used to obsessively dream up fantastical stories in my head, stories in which I was involved myself, like bowling for the Pakistan cricket team with Wasim Akram and taking more wickets than him; singing at a concert in front of thousands of people, living in a house where the only source of light was glowing Power Rangers floating in mid-air, achieving 20 in O levels, etc. I suppose as I grew older, I managed to control this madness, as I call it. I tried to give this chaos a language, and turn it into a vaguely coherent, narrative-producing process. It is either this, or more likely it just happened that the dots got so connected – although I have no idea how. Both are valid answers for me.

What is your writing quirk?
I don’t know if this counts as a quirk, but I do not write for very long. I have several writer friends who spend hours at their desks, but I’m more of a 30 minutes-a-day kind of writer. I also listen to music while I write – helps me stay at my desk. I gravitate between intense love and indifference towards writing, so I suppose I just try to do as much as possible in as little time as possible, all the while, distracting myself with some great music.

Although you are two novels old, you are much more than an author. You are engaged with communications and design, teaching literature, etc. Would you care to venture into other forms of art as well?
I play in a couple of bands. One of them, Barfaani Reech Ajao, actually initiated a concept album called ‘Chota Amreeka’ based on my first book Little America. It’s on Spotify. I can’t draw or work a camera to save my life, but I stumbled into the communication and design director position at Habib University, and I have to say it’s been a blast so far – I have never thought of the things that I now have to think of, like visual language, or something like graduating requirements, ororganizational empathy, so it’s been great for me. I can’t write if I have nothing else to do, so this and teaching, along with my other non-literary interests, have really made it possible for me to continue doing it.

Little America. Big surprise. The KLF 2022. That was huge. What did you do when you found out?
Completely unexpected, out of the blue, beyond strange, etc. It was honestly something that was not even in the remotest corners of my mind – I only write because I feel weird if I don’t - so I’m still trying to come to terms with it. I was invited to the inaugural ceremony of KLF where the award was announced, and I was pretty speechless when it happened. If you see the video, you’ll find me walking straight past the President of Pakistan and the director of the festival after getting the award, even as they tell me to wait (I was supposed to stay for a photo). I was in too much of a daze to be able to do anything. I was so confused, so shocked, I couldn’t tell what they were saying. But they finally managed to get through to me and I returned. Haven’t seen the picture yet though - I probably look like the most dumbfounded man in Karachi. Actually, I still feel quite dazed and can’t quite believe my luck.

“You can’t become a musician without listening to music, or a filmmaker without watching a million films – why should writing be any different?”

What has been your inspiration while writing Little America? And what are we expecting in The Year of Sound and Heat?
Little America came out of a conversation I had with a Pakistani friend of mine when I was living in the US. We were talking about how different life might have turned out if someone had told us how to go about the business of finding love and exercising freedom at a young age. I was like, okay, I’ll write about that someone, and that became the character of Sharif Barkati in the novel. The book just flowed from there.
The Year of Sound and Heat is completely different. It is based in Karachi in 2007, a year that is ingrained in my memory, and I’m sure in the minds of other young people who were just coming into adulthood at that time. It is an account of that year and the effect it had on the hopes and dreams of youth then, and how things like turmoil and uncertainty can shape the psyches of people who live in mega cities like Karachi. It’s a story of friendship, activism and belonging. It’s the love letter to Karachi I’ve always wanted to write.

What are you reading currently?
I’m teaching a creative writing class this semester, so most of my reading time goes into reading amazing, raw, mind-blowing pieces from my students. We have a magical theme for this workshop, so it’s the best escape. Outside of that, I recently read and loved Edward Carey’s “The Swallowed Man”. I am currently plodding through a very enjoyable “I Love You But I’ve Chosen Darkness” by Claire Vaye Watkins.

What is your advice for young, aspiring authors?
Read! For the love of God: Read! I meet so many aspiring writers who can’t name more than two or three books they’ve read. You can’t become a musician without listening to music, or a filmmaker without watching a million films – why should writing be any different? Read a lot. Read everything. Read obsessively. Read in other languages if you can. First read and read and read some more, and then we can talk about writing.