The impact of US-India partnership in the South Asian region and the resulting implications. 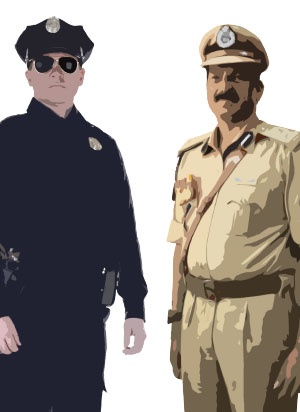 India, a country of well over one billion, second largest by population in the world, acts as a bully in South Asia. It has arrogance and egotism but this is seldom acknowledged by its neighbours - or the world. Consequently, India has had territorial disputes with all its neighbours and has wished to resolve these as per its own ambitions, but has been impeded by every other party involved. Another Indian trait has been the propagated notion of non-alliance so as to portray itself as a unique entity in its location, denying influence and interference by others. It may, however, be of interest to note that despite such assertions, India has been aligned notably with the erstwhile USSR and, subsequently, with Russia, for political, economic and military mileages.

Of late, India has been attempting to align itself with the US, wishing to maintain a strategic balance between the US and Russia. India successfully played the anti-China card which enabled it to reap benefits from the US. It was all hunky dory for India until the Russian invasion of Ukraine in February. Both sides have wished to muster maximum international support in their favour. India being the darling of both sides, was expected to enter this zero sum game. It has cast some serious challenges to Indian foreign policy makers.

India has always been charmed by the US and has sought to receive its attention. The US has also not been able to ignore India and has treated it with care for a better use in future, which is now enshrined in its Indo-Pacific strategy. Be it Kashmir, 1962 Sino-India conflict, 1965 and 1971 Pak-India wars, Pokhran nuclear test in 1974, direct and indirect USSR’s financial support to India in 1977, the Soviet invasion of Afghanistan, India’s nuclear tests in 1998, Kargil episode, the Twin Peaks crises between Pakistan and India, Mumbai incident, other skirmishes with its neighbours or India’s brutal handling of minorities, the US has been treading cautiously. Especially against its adversarial blocs, the US has been siding with the Indian aspersive narrative.

India has been hoping to attain UNSC permanent membership to not only make it stature unambiguous but also to depart from the need of any kind of alliance in future. This Indian move is important as it will not only bring power to India but also the autonomy that it has always wished for. India will then be in a position to chart a diplomatic course of action according to its desires and the territorial disputes with its neighbours can be managed as per its own interests. It will also be out of any zero sum gaming between her love affairs in future.

The Galwan Valley and Ukraine crisis have aggravated the need for UNSC permanent membership for India which should be wishing to run pillar to post so as to acquire it at the earliest. While it may be at top of the India’s wish list, there are hurdles to cross. India needs the outright consent of the US and its allies which is in jeopardy due to India’s ambivalent stance on the Russian invasion of Ukraine. If it is able to manoeuvre through these troubled waters and achieve UNSC permanent membership, it will be disastrous for her neighbours in general and adversaries in particular. 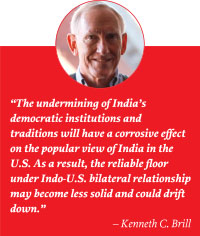 The US has become one of the largest trading partners of India. Their mutual trade has the potential to grow further and surpass India-China trade. Large number of Indian expatriates also form a strong tool for the Indian economy. In the prevalent era of geo-economics, economic relations between the two countries are not only important but sometimes an overriding factor. There have been countries that did not enjoy cordial relations yet maintained substantial mutual trade and ultimately could not part ways and even became allies. Iran and Turkey are a case in point.

The burgeoning economic relations between India and the US are likely to keep both in a love affair amid international crises where both may have divergent views. Strengthened relations between both will certainly accrue political dividends for India, ultimately enabling it to maintain a say in international matters so as to safeguard her interests. Again it’s a situation not favourable to her neighbours especially its adversaries and the minorities within the country.

Today India is a leading arms importer. The Stockholm International Peace Research Institute (SIPRI) listed India as the first largest global importer from 2017 to 2021. The country accounted for 11% of major global conventional weapons imports. The US and India, during the last few years, have moved closer in the military domain. Both provide logistical support and access to technological advancements to each other.

Russia is the first arms provider to India while the USA is the second. The US and its allies have offered and supplied some of the most modern and effective weapons and platforms to India during the past years. These have enhanced Indian military capability tangibly against her neighbours especially Pakistan. However, in order to bring it at par with China, there is lot more required that the US may not be able to fulfil. The Indian military hardware inventory is dominated by Russian equipment and to replace it altogether with US and European stuff is overall an impossible task.

The economic solution is to maintain Russian weapon systems while beefing up gaps with systems from other parts of the world. How will the amalgamation of the two can be manifested is a question the Indians must be grappling with. Nevertheless, in order to portray India as the net security provider in the Indian Ocean, it has to have effective military capability across all domains and this is a steady and time-taking process. This notwithstanding, given the Indian bullish attitude, arrogance and egotism, how much military capability India gains is certainly going to affect its neighbours.

Good relations between any two countries are primarily aimed at bringing prosperity to the respective populations through exploiting each other’s strengths and making up for the weaknesses. Mostly, the spinoffs are in the form of peace and prosperity for a greater area which may be a neighbourhood or a region or a continent. It is perhaps the attitude of countries that guides how to exploit these good relations and extract the best. The US and India are two prominent countries on the world map. Their interaction is expected to bring many benefits for their respective people and others living in the neighbourhood. With India’s bellicose attitude it is, however, least expected that it can be a harbinger of peace, tranquillity and prosperity for its neighbourhood or the world.

The writer is associated with the Institute of Regional Studies, Islamabad. She has interest in international politics and South Asian security dynamics and can be reached at reema.asim81@gmail.com