As neighbours, Pakistan and Afghanistan have more to gain from peace than from war. 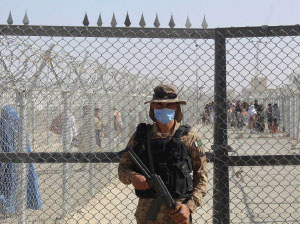 Pakistan has witnessed a sharp spike in cross-border violence from Afghanistan. Scores of Pakistani soldiers have lost their lives. It has almost become a regular phenomenon. Patience has limits and Pakistan was allegedly forced to carry out airstrikes inside Afghanistan’s Khost and Kunar provinces. However, Pakistan denies such airstrikes. These new developments have raised concerns that it may lead to strained relations between Afghanistan and Pakistan, and further polarisation in the region.

Pakistan and Afghanistan relations have a long history of mistrust. Some of the problems were inherited from the British imperialism and have not been resolved even after seven decades. Amongst them, the unresolved Durand Line issue has always been a bone of contention between the two neighbours as Afghanistan claims the Pakistani side of the tribal region while Pakistan has been campaigning that both sides should recognise the Durant Line as an international border.

Moreover, after 9/11, the bilateral relations between the two countries witnessed a new low. The Karzai regime and the US-led western forces overlooked the anti-Pakistan activities that were harboured in those days. Pakistan repeatedly urged the Afghan government and the US-led NATO forces to stop TTP and other foreign sponsored activities against Pakistan and bring to justice to the culprits involved in heinous crimes such as the Army Public School (APS) incident and handlers behind the killing of security forces and civilians. Unfortunately, no punitive action was taken against the rogue elements and this contributed to the mutual mistrust.

The Afghan regime, in return, alleged that Pakistan should stop providing safe havens to the Afghan Taliban that are operating from Pakistani soil. Hence, each state’s blame game on the other led to a vicious circle of violence with no end.

Afterwards, when the Taliban took over in August 2021, Dr Ashraf Ghani’s government was overthrown. There was a strong backlash against the Taliban regime from the international community. No state recognised the Taliban government owing to its rigid stance towards human rights and constitutionalism. Furthermore, they were also not flexible in their approach during the negotiations and neither were they accommodative.

Nevertheless, after they assumed power, there was a severe shortage of food and other necessities. Pakistan took the initiative to convince the international community that if they did not engage the Taliban regime, there was a danger of another civil war and if it broke out, it would blow out of proportion and would not only destabilise the entire region but also would become a nursery for terror outfits endangering global peace. In this pursuit, Pakistan organised the OIC ministerial conference to seek global support and humanitarian assistance for Afghanistan. A number of states also committed to support the Afghan people.

Pakistan has an interest in a stable, peaceful and progressive Afghanistan, as peace in Afghanistan will have a ripple effect on Pakistan and other neighbouring states.

Pakistan had also expected that the new regime would ensure that no anti-Pakistan activity was permitted from Afghan land, including from the TTP and its allied terror outfits. Nonetheless, the Taliban regime set free jailed TTP terrorists who were imprisoned by the Ashraf Ghani government. Pakistan expressed its concerns but the Taliban ignored these protests. 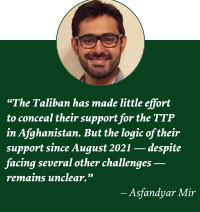 Later, Pakistan started back channels negotiations with the TTP. The truce ensured temporary peace and cessation of hostilities. There was also news that the Afghan Taliban were facilitating the negotiations. But the negotiations failed and violence erupted. Ambush incidents on Pakistani security forces led to deaths of dozens of soldiers. According to estimates, more than 100 soldiers have been killed by the militant groups since January 2022. Pakistan ministry of foreign affairs said: “In the last few days, incidents along the Pak-Afghan border have significantly increased, wherein, Pakistani security forces are being targeted from across the border. The attacks were being carried out with impunity while Islamabad had repeatedly asked Afghan authorities to act to stop them, to no avail.”

In addition, according to the Institute of Peace Studies, an Islamabad-based think tank, since the collapse of the western-backed Ghani government in August 2021, the TTP had carried out more than 85 attacks in Pakistan - more than double the number over the same period during the Ghani government. The attacks killed more than 133 Pakistani citizens.

The Taliban were furious and issued warnings to Pakistan to not repeat the same in future. The Afghan defence minister, Mullah Yaqoob warned: “the Taliban government would not tolerate any more invasions from neighbouring countries on Afghan soil.”

The Taliban government spokesperson Zabiullah Mujahid, condemning the action, said: “The Islamic Emirate of Afghanistan (IEA) strongly condemns Pakistan’s attacks on refugees in Khost and Kunar. The IEA calls on the Pakistani side not to test the patience of Afghans on such issues and not repeat the same mistake again otherwise it will have bad consequences.” Zabiullah went on to say: “This is cruelty, and it is paving the way for enmity between Afghanistan and Pakistan. We are using all options to prevent repetitions of such attacks and calling for our sovereignty to be respected”. The Afghan regime also summoned the Pakistani ambassador in Kabul and registered its protest.

These developments raised alarm bells that the rifts in Pak-Afghan relations may worsen and drag the two states into a spiral of violence. However, both sides have adopted a cautious approach that embitterment will benefit neither of them.

Logically, it seems that the Taliban also know that they cannot offend Pakistan, a country that is campaigning for Afghanistan’s humanitarian support, release of its frozen funds and engagement with the Taliban government to stabilise Afghanistan.

Pakistan wanted to remind the Afghan government that its legitimate concerns must be addressed. Good relations with the Taliban do not mean that the people of Pakistan will tolerate anti-Pakistan activities being operated from Afghani soil. They want action against TTP, otherwise Pakistan has the will and capability to protect itself by any means. This soft reminder will also compel the Taliban to rethink its policy towards the TTP as their approach to the terror outfit will endanger its goodwill and relations with Pakistan. The new version of Taliban are more diplomatically-oriented. After years of fights, they will definitely compel the TTP not to attack and start negotiations with Pakistan.

Pakistan and Afghanistan cannot afford worsening ties as it will be self-destructive for both the countries. They have suffered decades of violence and must now cooperate and address each other’s legitimate concerns, respect territorial sovereignty and discuss the way forward.

This writer is a freelancer, currently pursuing postgraduate studies at the University of Strathclyde in Glasgow, Scotland. He can be reached at amjadsiyal@hotmail.com