Can Pakistan escape Sri Lanka’s fate? This is a question that is asked frequently these days. If Pakistan restructures its economy in a prudent manner, there will not be any kind of going the Sri Lanka way. 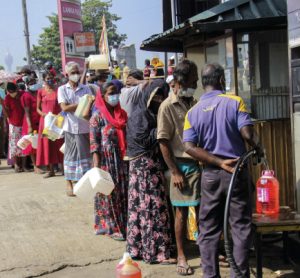 Is Pakistan heading the Sri Lankan way? It is a question that is being echoed across the length and breadth of Pakistan’s thought landscape with a metronomic regularity. Is the allusion to Sri Lanka’s economic meltdown and concomitant political crisis correct? The answer is yes and no. Yes inasmuch as Pakistan’s economy suffers from macroeconomic instability and not because of the different etiology of the Sri Lankan economic crisis. In Pakistan the economic crisis is the handiwork of political instability and consequent lack of long term structural reforms in the economy. Pakistan’s economy needs long-term vision and fundamental structural reforms to make it more productive and competitive, instead of the present elite captured rent seeking model pandering to the comfort zone of pampered corporate elite and political oligarchy. In Sri Lanka, contrarily, it was the economic mismanagement and corruption by a political oligarchy that despite its long and stable rule hollowed out the economy through corrupt cronyism.

The loans taken by the Sri Lankan government for ambitious infrastructure projects, including development of port infrastructure and operations of famous Hambantota port, were siphoned off by the ruling oligarchy towards non-productive sectors in a non-transparent manner, leading towards failed projects and financial default. The result was a pawning of national infrastructure to foreign countries and continual economic slide. In Pakistan, however, it was a political instability begotten out of curtailed government tenures that militated against a long-term vision and fundamental structural reforms in the economy. Pakistan’s anemic economy needs an injection of fresh blood of structural reforms rather than anodyne policy prescriptions geared to the interests of rent seekers in the corporate sector and affluent elite of the country.

A three-pronged approach of structural reforms, removal of elite privilege, and human development could avert a Sri Lanka-like fate for Pakistan. According to a recently disseminated UNDP Report, the richest 20% of Pakistanis appropriate 49.6% of the national income whereas the poorest 1% have access to a paltry 7% of national resources. Due to iniquitous economic policies the middle class has already shrunk from 42% of the population in 2009 to 36% in 2019. According to the National Human Development Report 2020, the share of public expenditure for the rich in Pakistan is 37.2% compared to a measly 14.2% for the poor. The UNDP has taken note of Pakistan’s low ranking on the HDI index (Second to last in South Asia, ahead of Afghanistan only) and has recommended policy changes to reduce concessions for the elite by spending more on the poor, especially in healthcare and education sectors. The cost of the concessions to Pakistani elite comprising corporate elite, political oligarchy, feudal landlords and the bureaucratic elite, comes to a staggering $17.4 billion (6% of the national economy).

The biggest beneficiaries of the tax subsidies and financial concessions are the corporate elite that gobble up $4,7 billion in privileges, followed by 1% rich that own 9% of national income and feudal elite that, with a size of 1.1%, own 22% of total arable land in the country. Pakistan’s political economy is heavily tilted in favour of the elite that refuses to let go of its privileges that are stultifying national growth and economic development. The members of the same extractive elite are found in national parliament, business elite and land owning feudal oligarchy. The weak labour unions and unorganized worker class coupled with a weak democratic impulse in the masses, smarting under the oppressive bondage of feudal, political and bureaucratic elite, precludes the possibility of a political revolution to correct the iniquitous structure of the political economy. Perhaps a social revolution would precede a political revolution to right all the wrongs but till then the nation has to chart a course correction to avoid floundering on the rocks of economic insolvency.


Independent economists have been prescribing remedies like structural reforms in economy and innovative use of monetary and exchange rate policies to awaken the economy from its rigor mortis state. A quick glance at economic performance of countries like Bangladesh and India would show where we stand compared to regional economies beset with the same external constraints like us. Indian exports have surged to $400 billion despite Covid related shocks to the economy with their foreign exchange reserves standing at $600 billion. Bangladesh’s exports have surged to $43.2 billion compared to Pakistan’s $26.1 billion from July 2021 to April 2022. Both the countries have outperformed Pakistan despite corruption and other internal security challenges primarily due to political stability and consistent export friendly economic policies.

On Pakistan’s front, instead of following pro exports policies and enhancement of industrial productivity, corporate rents were offered to rent seeking carpet baggers whose only motive was earning fast bucks, free riding on public goods offered on concessional rates by a conniving state promoting patronage politics. Pakistan’s policy response on the economic front hitherto fore has been to acquire more loans to bridge the inefficiency begotten out of balance of payments deficit without instituting structural reforms to correct the imbalances and inefficiencies, that in the first place, created those deficits. Pakistan needs to correct these imbalances to avoid loan driven and consumerism promoting growth. The GDP growth would get translated into benefits only when it is productive growth based on solid industrial productivity instead of consumerism pandering loan dependent growth.

At present Pakistan’s foreign exchange reserves have plummeted to $6.5 billion, barely covering a few weeks of exports with a drop in currency by 6% this year. Have monetary policy tightening and exchange rate depreciation worked as panaceas for our economic downslide? We have tried IMF’s Washington Consensus driven prescription of exchange rate depreciation but to no avail. Pakistan’s currency depreciated 45% between 2012 and 2020 compared to 1% in Bangladesh in the same period, but while Bangladesh’s exports soared to 39% in 2020 Pakistan’s declined by 13%. The reason was Bangladesh’s value addition efficiency compared to Pakistan’s low value added yarn and cloth-based exports thriving on government subsidies and handouts. On the monetary policy front, the raising of interest rates has increased the national debt and has failed to have the desired impact on inflation control and demand management.

The inflation control task as per SBP Amendment Act 2021 that mandates the State Bank to control prices, demands a human welfare centric approach considering of Pakistan’s economy’s high informality and iniquitous structure. SBP’s monetary policies therefore should be focused in keeping prices stable and inflation within tolerable limits i.e. 5-6%. Pakistan can avert Sri Lanka’s fate only if the elite is forced to loosen its stranglehold on the national economy and some structural reforms in economy are instituted through a national consensus. These reforms include removal of subsidies and concessions and promotion of genuine industrialization to diversify and enhance exports portfolio together with privatization of loss-making SOEs that are costing the national economy 12-18%. To counter fiscal deficit tax reforms are de rigueur, as since 2001 the government is relying disproportionately on indirect taxes (65 withholding taxes levied) besides increasing tax burden on existing narrow base of tax filers. The tax base needs to be broadened along with removal of tax concessions of 1.5 trillion and corralling of a segment of the informal economy in tax net through attractive incentives.

Pakistan can escape Sri Lanka’s fate provided structural reforms in the economy are affected and the elite capture of economy is reversed through approach stated here.

The writer is Director of the Islamabad Policy Research Institute. He can be reached at rwjanj@hotmail.com