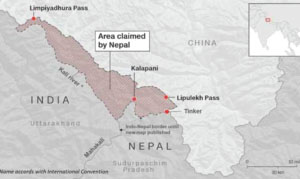 The Nepalese Prime Minister Sher Bahadur Deuba visited India in early April. In his three-day visit, he met his Indian counterpart Narendara Modi and several other BJP leaders in order to strengthen both his country’s ties with India and his Congress party’s connectivity with BJP. With that end in view he, along with the Indian leader, launched multiple projects which included energy projects and a 35 km long cross-border railway line from Janakpur in Nepal to Jaynagar in India. No doubt, the visit will improve relations between the two countries, but there is a question: will it put an end to the years long border dispute between them? Before going further, it would be better to have an overview of the historical background of the issue.

The border dispute between them has been brewing for years now. Since 1995, Nepal has been claiming that the 335-km region consisting of Kalapani, Lipulekh and Limpiyadhura, belongs to it in accordance with the Treaty of Sugauli. However, India says that the disputed zone is its part as it has been under its administrative control ever since independence. What is the Treaty?

The Treaty of Sugauli was signed between the British and Nepal in 1816, two years after the Anglo-Nepalese War. Under the pact, the two rivers, Mahakali and Mechi, were used to define the western and eastern borders of Nepal. The border of India with the Himalayan nation ran along those rivers. This solved the problem apparently, but there was a possibility that an issue might develop along the western border because the river Mahakali, near the region of Kalapani and Lipulekh, splits into two. In fact, two tributaries merge into it. So it could confuse matters as to which side should be taken for the main river, the eastern or western. If the western side was recognised as the boundary, then the said area would go to Nepal. And if the eastern part was accepted, then the territory would be given to India.

At the time of concluding the Treaty, the British felt no need for the territory so they took the western flank of the river as the border line. But in the 1860s, they realised its strategic importance and altered the map in a way that the disputed regions became a part of India. The monarchs of Nepal voiced no concern. Since then the area remained under the British Raj till 1947. After that it is under the jurisdiction of India.

The issue came to the fore in 2015 when India and China decided and signed an agreement to develop trade and transit via Kalapani. The public in Nepal protested against this agreement and termed it violation of Nepal’s territorial integrity. The issue remerged when, in November 2019, the Indian government issued a new map of the country, which included the disputed territory of Lipulekh, Kalapani and Limpiyadhura. This provoked widespread protests in Nepal. On 20 May, 2020, the Nepalese government amended its constitution and published a map which showed the disputed area as part of Nepal.


The matter became even worse when India inaugurated an 80 km long road that passed through Lipulekh without the prior knowledge or approval of Nepal. The purpose behind building the road, as per Indian, was to facilitate the Kailash Mansarovar Yatris (pilgrims) as the road would serve as the ‘shortest route’ from India to Mansarovar, a pilgrimage site in the Tibetan plateau.

Will the recent visit of Nepal’s prime minister put an end to the dispute? Undoubtedly, this is a positive step because the issue has been raised on a very high diplomatic level. After his meeting with the Indian PM, Nepal’s Prime Minister Sher Bahadur, in a joint press conference, said that he had proposed to resolve the dispute through a bilateral mechanism. This bodes well as it shows the commitment of the Nepalese premier.

However, there was not much response on the Indian side as Modi preferred to stay silent on the matter. This reveals a thinly veiled attempt by India to use delaying tactics because it benefits from its de facto control over the territories. It is encouraging to mention the comment of the Indian Foreign Secretary Harsh, Vardhan Shringla that he made on the matter. He said, “There was a general understanding that both sides needed to address this in a responsible manner through discussion and dialogue in the spirit of our close and friendly relations...”

From the response of Indian PM, it can be deduced that the visit alone will not resolve the matter unless there is a sincere attempt on the Indian side. Indian efforts at finding a solution are not new as Atal Bihari Vajpaye had tried to resolve the issue in early 2000. His efforts did not produce any concrete results and mutual consensus is needed to make progress.

Some analysts are of the opinion that it is futile for both countries to fight over the territory, given the fact that nationals of both states move across the border without visas as the countries share an open international border. It is because of this that thousands of Nepalese are said to be living and working in India. India needs to consider this and show an inclination to resolve the dispute through a peaceful and amicable settlement.

The writer is a freelance columnist based in Larkana, Sindh. He can be reached at sjatoi831@gmail.com