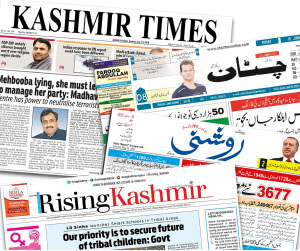 The valley of Kashmir has remained a flashpoint between the two South Asian nations - Pakistan and India. The two countries are locked in a contest and cold-war mentality since 1947. In the backdrop of India’s illegal and forceful occupation of the major part of the Kashmir valley against popular public will, the people have always resented the oppressive Indian regime. Courtesy of this Indian aggression, the region remained charged with turmoil and instability.

The people of Indian-occupied Kashmir have been suffering the repressive regime for decades. From demographic transitions of turning Muslims into a minority to undoing its long held autonomous status; from warnings of impending genocide to the worst records of human rights violation, the Indian administration continues to shrink space for its citizens through Draconian measures. One of the such dictatorial tactic is the media coup - a communication and media blackout of Kashmiris. The media has faced authoritarian curbs and duress ever since the Kashmiri freedom fighters rose against the Indian oppressive regime and faced Indian troops, to join Pakistan or emerge as independent state altogether. The ensuing fighting resulted in deaths and displacement of thousands. Despite the tensions and Indian pressure, occupied Kashmir’s media thrived - only to be stricken down in the aftermath of Mr. Modi’s ascension as PM.

Though the people of Indian occupied Kashmir and journalists faced serious threats and worked in a warlike situation, revoking of the autonomous status of the region in August 2019 worsened the plight of the media. Amid frequent blackouts and curfews and international isolation from mainstream global coverage, local media and journalists have been the only sources of information in the valley.

Following the undoing of the autonomous status of the region, the coercion and harassment of journalists escalated to an unprecedented proportion. The government has enforced harsh media policies to tighten state censorship and curb independent reporting and journalism. Around four dozen journalists were raided, arrested and questioned on the charges of sedition and under counterterrorism laws. Many media people have been restricted from flying abroad.

The crackdown against the media and journalists is manifested in many other instances, such as extra-judicial detention of journalist Sajjad Gul under the controversial Public Safety Act (PSA) and the closure of the Kashmir Press Club in January, 2022.

The Kashmir Press Club had emerged as an important platform for journalists for support to colleagues facing government wrath. As the region’s largest registered body of professional journalists with membership over 300, the closure of KPC is the Indian government’s formal acknowledgment of treating media as a threat to a repressive regime. Despite the suffocation, the local press always worked under great strain.

However, the silver lock hanging at the KPC’s black gate in the heart of Srinagar is a reflection of India’s latest onslaught on the suffocating plight of media in the valley.

Media persons from other countries are not permitted to visit and report on Kashmir without the prior permission of the Indian Home Ministry. Though an exceptional rarity, the foreign correspondents permitted have to undergo deliberate strenuous procedures.

Human rights groups and organisations have not escaped Indian wrath. They are raided, apprehended and punished under anti-terror and oppressive laws.


This unprecedented and sudden media crackdown has sent shock waves to media persons who have expressed grave concerns about the totalitarian moves of the BJP government.

“The last bastion of free speech in the (Kashmir) valley is gone,” writes Nazeer Masood, a correspondent affiliated with New Delhi Television. Quratulain Rahbar, a freelance reporter, says, “As a female journalist, KPC was one of the few secure places where I could work and file stories without fear”. A correspondent for ‘The Hindu’ newspaper, Peerzada Ashiq regretted the closure of the club and said the sense of security he used to draw from the club is gone. “Now there is no cushion left to fall back on,” he added.

“Indian authorities appear determined to prevent journalists from doing their jobs,” says Steven Butler, Asia Program Coordinator of the US- based Committee to Protect Journalists (CPJ).

“Authorities have created systematic fear and launched a direct assault on free media. There is complete intolerance of even a single critical word. There is an attempt to wipe out any trace of independent press and turn whatever exists into a PR vehicle. This is extremely frightening,” she says.

“It amounts to stifling the voice of journalists in the region,” he said.

India’s Editors Guild dubbed the media shutdown in the valley as the worst form of offense against the free media.

Indian body of media persons slammed the move. The Delhi Union of Journalists (DUJ) resented the move and said, “we are dismayed at the government move to close the Press Club of Kashmir.”

In the midst of growing repression against media and freedom of speech, India stood at 142 position in 2021, well below Zimbabwe, Angola and Afghanistan in the World Press Index issued by Reporters Without Borders (RSF)- a French Media watchdog. India did slide to 150th position in RSF’s 2022 report, 8 points down from 2021. RSF urged Indian authorities to respect freedom of expression and release the destined media persons.

“On the World Press Freedom Day, Reporters Without Borders and nine other human rights organisations ask Indian authorities to stop targeting journalists and online critics for their work,” the body said on its website.

“More specifically, they should stop prosecuting them under counterterrorism and sedition laws,” the statement further said.

The crackdown against the press and the impending catastrophe of Muslim genocide appear to be two parallel and planned moves of the Modi government. The former reflects India’s satanic intentions of keeping the persecution of Kashmiri Muslims unreported. In the backdrop of this aggressive Indian behaviour, the international community, human rights organisations and global civil society need to come forward to the rescue of the innocent Kashmiri Muslims. They shouldn’t stand as silent spectators watching blatant human rights violations in India. The fragile peace of the world cannot afford yet another catastrophic blow to Muslims of Kashmir with lasting local, regional and international ramifications.

The writer is based in Kandhkot, Sindh. He can be reached at alihassanb.34@gmail.com