The PML-N and PPP have come and slapped together some form of a government but how long will it last is anybody’s guess.

We are supposed to be following the British parliamentary system, but being far more adventurous, we bend it according to our liking, thus turning it into a novelty. For example, the British system comprises the ruling party and the opposition party having their functioning cabinet and shadow cabinet, respectively. In our system, at least in Punjab, we briefly had two cabinets, both claiming to be functional cabinets, with the shadow cabinet being non-existent.

Actually, Hamza’s election was held on orders from the Lahore High Court, which had also advised the Governor to administer oath to Hamza. The Governor deemed this as needless meddling and, going further, even sent a reference against the concerned judge to the Supreme Judicial Council. Eventually, the LHC asked the Speaker of the National Assembly to conduct the oath-taking ceremony at the Governor’s House in Lahore. The governor was absent from the ceremony while the IG Police and the Chief Secretary attended.

An amusing situation arose when, on being resurrected as CM, Usman Buzdar happily arrived at the Punjab Assembly, with official protocol, to hold a meeting. But, in the meantime, Hamza Shahbaz had been administered the oath, whereupon, the vehicles in the former CM’s protocol were reported to have rushed to the new CM’s location, forcing Usman Buzdar to use private transport to reach home.

Our politicians bitterly complain about interference from the Judiciary and the Establishment. But behaving like spoiled brats, they force others to intervene because, after all, the country has to be kept functioning.

Unfortunately, both the federal and Punjab governments are hanging by a thread and face the risk of being asked to prove their majority, which could reverse fortunes. This is especially true for the Punjab government which has been formed with the votes of PTI’s dissenting members who could be disqualified by the Election Commission, thus ending Hamza’s majority.

However, with Pakistani politics being unpredictable, let us play it by ear.

Also, if Imran Khan and Usman Buzdar could become the prime minister and chief minister, respectively, without either of them having any special qualification or relevant senior-level experience, why should Bilawal Bhutto’s appointment as a Foreign Minister ruffle feathers?

After all, the afore-stated examples – which are by no means exhaustive – prove the fact that in recent Pakistani politics, merit has rarely been the determining factor even for senior positions. Of course, dynastic politics pushes the merit factor further into insignificance. When two dynasties are competing for senior positions, their respective bargaining power is what determines the outcome. 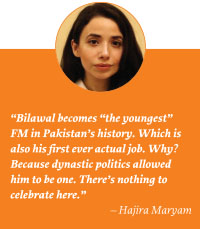 The IMF has also raised concerns on these At present, the two major parties, PML-N and PPP, which have been alternating for decades, are back again and have come together with scores of allies, all united against the Tehreek-e-Insaf led by Imran Khan whose government they ousted at the centre and in the Punjab. The situation remains fluid. But with their decades of experience in wheeling and dealing, and now enjoying the support of Jahangir Tareen and Aleem Khan, the coalition could work things out, perhaps by standing on the crutches of more dissenters.

We had a brief interlude from the PTI, which came to power not because of its popularity but more due to the people’s dislike for PML-N and the PPP’s corruption. The same old timers are now back in power. The only good memories of their previous rule were the smooth transition of power, elected governments completing their five-year terms and some useful aspects of the 18th Amendment to the Constitution.

The brief introduction of PTI has disturbed this ‘arrangement’ and brought back politics of agitation, coupled with hooliganism even inside Assemblies. What a shame!

The coming of PTI on the political scene, which was seen as a dream-come-true and a breath of fresh air by a large number of Pakistanis both at home and abroad, has now turned into a nightmare. Defying all odds, many die-hard supporters of Imran Khan remain firmly committed to him.

However, with PTI out of the centre and Punjab, reports of wrongdoing by it will start hitting headlines, and even ‘non-believers’ may have to admit the sad fact that we have been deceived yet again, with a package of incompetence and corruption, coupled with needless arrogance, insensitivity and utmost defiance, marketed under false label of ruthless accountability and ending major corruption. Worse still, past masters are back in the saddle unscathed, having plentiful coalition partners, each of which is demanding his pound of flesh. With so many shareholders in the limited national revenue, what could be left for the public?

As to Bilawal as the Foreign Minister at a time when so much is happening in the region and the world, surely, we could have done better with an experienced person in the position. We are in dire financial straits and would need help from various international financial institutions, many of which are under the ‘influence’ of the US with which Imran Khan has needlessly aggravated our relations. There is also the question of a proper balance in our relations with China, Russia and their rivals, the US and its allies even though our major reliance would have to be on China. Moreover, we have problems at both the eastern and western borders.

Cross-border attacks, planned, executed or both, from Afghanistan have become a regular feature. As for Afghan Taliban rulers, they appear to have neither the will nor the ability to defang TTP and other international terrorist groups stationed in Afghanistan. There are also serious differences between major Afghan groups. Together with China, and using both persuasion and pressure, we have to get Afghan rulers to agree to a plan of action which serves the interests of all neighbours. Also, peace has to be brought to Balochistan using not just sticks but also carrots. Peaceful conditions there could enable exploitation of vast mineral resources, thus improving economic conditions in the province.

To handle the foregoing complexities, we need a very experienced Foreign Minister. But then, since Pakistan Peoples Party had played a major role in the present turnaround, and has claimed – and been granted - the Foreign Minister slot for Bilawal Bhutto, all that can be done is to provide him a team of competent and experienced advisers. Luckily, Hina Rabbani Khar has already been appointed as the Minister of State and some more experienced persons could be inducted into the ministry. Hopefully, availing this pool of collective wisdom, plus useful input from the establishment, Bilawal Bhutto would be able to deliver.

A cordial telephone call from Antony Blinken to Bilawal Bhutto heralds some thawing of relations with the US.