Despite its economic successes, Bangladesh seems to be sliding into authoritarian rule under Sheikh Hasina. 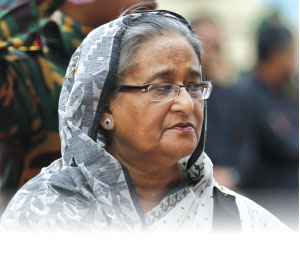 In 1972, the US secretary of State, Henry Kissinger was very pessimistic about the future of Bangladesh. He described the country as ‘a bottomless basket case’.

Kissinger’s remarks, though extremely gross, were not far from the truth. The country had a per capita income of around 90 USD, its economy was in tatters and the population had been exhausted by war.
Within just five decades, Bangladesh has clawed its way out of the economic pit. Its Gross Domestic Product is around USD 344 billion, and its per capita income is above USD 200. The country has seen a dramatic decrease in the poverty rate, which is around 14% - a miracle if compared with 43% in the early 90s.

Bangladesh has seen more than its share of political turmoil since its inception. Only four years after independence, Sheikh Mujibur Rahman, a widely popular leader and prime minster of Bangladesh, was assassinated along with his family members in a coup. His two daughters escaped because they were out of the country at the time. The brutal murder of Mujibur Rahman plunged the country into an extended period of political instability which claimed the lives of many prominent political figures.

The country returned to parliamentary rule in 1990 when massive public protests led to the ouster of Hussain Muhammad Ershad – the army chief-turned president.

Amid widespread allegations of election rigging in 1996, a caretaker government was introduced. This required the out-going government to hand over power to an interim setup after the end of its 5-year mandate. The caretaker government, representing civil society, was obliged to hold free and fair elections within three months.

The next three elections held under caretaker setups were generally regarded as free and fair. Two major political parties emerged during this period: the Awami League led by Sheikh Hasina – Sheikh Mujibur Rahman’s daughter and Bangladesh National Party led by Begum Khaleda Zia. Power shifted back and forth between the two.

In 2014, the then incumbent prime minster, Sheikh Hasina dealt the first blow to democracy by unilaterally abolishing the caretaker system. Awami League remained in power after the end of its term and held general elections of 2014 under its watch. BNP and other opposition parties vehemently opposed this move and boycotted the elections. Awami League won a landslide victory, securing an absolute majority in the parliament.

The next elections in 2018 were also held in the same manner, and again saw the Awami League assume power allegedly through widespread election rigging with the help of the country’s security apparatus.
Despite democratic regression over the past few years, Bangladesh has seen remarkable socio-economic progress. Its garment industry is second only to China and generates hundreds of billions of dollars annually. It has also surpassed neighbouring India on several social indices, like education, nutrition and life expectancy.

However, the fruits of this remarkable growth have not trickled down evenly. A wide income equality gap plagues the country. Moreover, the country has seen a sharp rise in arbitrary detentions, enforced disappearances, torture and extrajudicial executions.

Opposition leaders, especially these belonging to Awami League’s archrival BNP, are being harassed with police cases and arbitrary arrests. Many have been thrown into jails on trumped-up charges. Critics say that Sheikh Hasina’s government is tilting towards authoritarian rule and seeking to silence every voice opposing it.

The government passed the Digital Security Act (DSA) in 2018 under the guise of preventing racism; extremism and sectarianism through social media, print media or any other platform.

The DSA provided Sheikh Hasina’s government with the necessary tool to step up its fight against democracy. The controversial law contains vague provisions designed to provide enormous power to the government. But the most dangerous part of the law is where it gives powers to the law enforcement agencies to arrest, search and seize without warrant. Another horrifying aspect of the DSA is that most of its provisions are unbailable. This means that anyone arrested under the provisions of this law can be held for an indefinite period. A strange provision of the law allows anyone to file a case against an individual even if the filer is not the aggrieved party. This means that if one feels that a particular individual has insulted or defamed a third person, he is at a liberty to file a case against that individual.

Over the past three years, hundreds of cases have been filed under this law accusing more than 1800 individuals of alleged crimes. Hundreds of people were arrested out of which only a few were able to secure bail. The rest are still in prison. Most of them are young between 18 to 40 years of age. Most cases have been filed by law enforcement agencies, government servants and members of political parties aligned with the Awami League. It is obvious that the government, along with its affiliates, is making extensive use of the DSA to quell dissent.

The DSA has created such a climate of fear that journalists and newspaper columnists are afraid to write openly against government excesses for fear of reprisal. But the DSA is only one of the manifestations of Bangladesh’s slide towards authoritarian rule. This is also evident from the government’s war against independent media, civil society and state institutions.

Bangladesh is regarded as a role model of economic development. However, sustained economic growth cannot be ensured if the basic principles of democracy and good governance are trampled in such a blatant manner.

The writer is a freelancer and an investment banker based in Karachi. He can be reached at syedatifshamim@hotmail.com