There is a threat of an economic meltdown in Sri Lanka and Pakistan. The article analyses the external accounts of both countries. 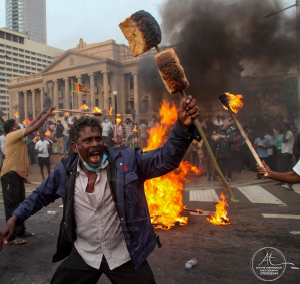 Both Pakistan and Sri Lanka are again at the brink of economic turmoil. The International Monetary Fund (IMF) released statements on Pakistan and Sri Lanka at the end of April 2022 after meeting the respective delegations, warning of significant economic risks and challenges to both countries. The statement on Pakistan discussed the developments under the Extended Fund Facility (EFF) programme. It stated the need to remove unfunded subsidies offered by the government in recent months and the resumption of discussion of policies for completing the 7th EFF review. The statement also stated the desire of the Pakistani authorities to extend the EFF arrangement through June 2023.

The statement on Sri Lanka stressed the need to restore macroeconomic stability and signified the importance of strong social safety in order to alleviate the impact of an economic crisis for a more vulnerable population.

In essence, both South Asian economies face significant economic challenges and are looking towards the IMF for funds to mitigate the impact. According to the IMF’s country statistics, Pakistan has had 23 arrangements with the IMF since its membership in the fund while Sri Lanka has had 16. Both became members in 1950. Pakistan had outstanding purchases and loans 5.4 billion SDR (special drawing rights) in March 2022, while Sri Lanka had 892 million SDR.

Pakistan and Sri Lanka are both reporting significant pressure on their external accounts. According to statistics provided by the State Bank of Pakistan (SBP), Pakistan’s account deficit was $13.17 billion in the first nine months of fiscal year 2022. Comparatively, the current account, at $275 million, was barely in deficit in the same period in the previous fiscal year. This was similar to the amount when the economy was last facing a crisis situation in FY18 and was planning to negotiate the EFF package with the IMF. The current account deficit is at around $20 billion, slightly below 6% of GDP.

According to statistics provided by the Central Bank of Sri Lanka, the country had a current account deficit of $3.3 billion in 2021, which was more than two times the amount reported in 2020 and the highest reported since 2012. With a GDP of approximately $80 billion, the current account deficit in Sri Lanka is about 4.1% of GDP. This is comparatively lower than that of Pakistan. Further, Pakistan’s real GDP growth rate as reported by IMF DataMapper in April 2022 was 4% and inflation was at 11.2%. Sri Lanka’s real GDP growth rate was reported at 2% and the inflation rate was at 17.6%. Both countries faced low growth rates and high inflation rates during the pandemic. However, the recovery in GDP growth rate was higher for Pakistan than for Sri Lanka as Pakistan peaked at 5.6% in 2021 after the low on -1% in 2020, while Sri Lanka achieved 3.6% after dipping to -3.6% in 2020. 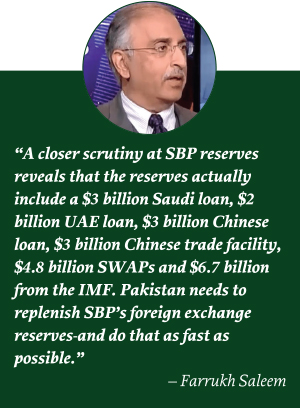 One of the most important factors that worsens the balance of payment conditions in a country is the deterioration of the foreign exchange reserves. The accumulation of reserves helps provide macroeconomic stability, particularly as it can prevent sharp volatility in the exchange rate. The deterioration of foreign exchange reserves increases the risk of speculative attacks on the currency. Pakistan experienced a sharp decline in foreign reserves held by SBP in March and April 2022. Reserves peaked at $20 billion in August 2021 and declined to $16.4 billion in February 2022. However, in March the reserves declined sharply to $11.4 billion. The reserves were reported at $10.6 billion on 23rd April 2022. The import cover has declined from approximately 3 months in mid-2021 to less than two months in April 2022. The situation is indeed challenging. Sri Lanka’s official reserves were $1.9 billion at the end of March 2022 with total currency and deposits of $1.6 billion. The official reserves were down from $3.1 billion at end of December 2021, with total current and deposits of $2.7 billion. Imports are around $2 billion each month. Therefore, the import cover has shrunk from approximately 1.5 months to less than 1 month.

Economies that often face a balance of payment crisis, such as Pakistan and Sri Lanka, are extremely dependent on the flow of dollars into the economy as it helps accumulate reserves. Pakistan mostly depends on two sources, remittances and exports, while Sri Lanka also earns additional revenues from tourism. Although, COVID-19 had a disastrous effect on several developing countries in 2020 as their level of production and exports declined, Pakistan was spared. Apart from the initial few months of the crisis, exports from Pakistan reported healthy growth levels as government incentives played an important role in reviving the domestic economy. Exports of goods that had remained stagnant at less than $25 billion for most of the previous decade, were expected to increase to $30 billion this fiscal year. This has primarily been driven by growth in the textile sector. Similarly, the ICT (Information, Communication and Technology) sector has reported phenomenal growth levels in Pakistan, becoming an important player in terms of attracting dollar receipts in the country. Remittances too have reported decent growth levels in the last two years and are now expected to exceed $30 billion. This too was made possible through interventions by the State Bank of Pakistan as it encouraged inflows from Pakistani expatriates.

On the other hand, Sri Lanka reported greater volatility in its inflows. According to data extracted from its central bank, exports decreased from $11.9 billion in 2019 to $10 billion in 2020 but recovered to $12.5 billion in 2021. The earnings from remittances declined by $1.6 billion between 2020 and 2021 since they fell from $7.1 billion to $5.5 billion. Remittances continued reporting a downward trend as the amount in the first quarter of 2022 was 58.1% lower than that received in the same period the previous year. Sri Lanka witnessed a sharp decline in earnings from tourism from 2019 onwards. COVID-19 aggravated this situation as Sri Lanka earned only a quarter in revenue from tourism in 2020 and 2021 relative to its earnings in 2019. Revenue from tourism was 60% of the inflows from remittances in 2018. This had diminished to less than 10% in 2021. The numbers have started to pick up but are not near the levels that were reported before the COVID-19 crisis.

Sri Lanka is looking for avenues to bridge the financial gap and will rely on partner countries as well as multilateral agencies to provide the crucial funding. India has assisted Sri Lanka in providing essential funds, while it may also seek support from China. The World Bank is also expected to play a key role. Similarly, Pakistan has sought assistance from friendly Middle Eastern countries as well as China to provide it trade credit as well as the possibility of extensions in debt repayment.

Interestingly, both countries have a free trade agreement and have friendly relations. It seems their economic destinies are also similar. Sri Lanka may have defaulted on some of its external payments, Pakistan may have negotiated some leverage for the time being. However, it is critical that policymakers in both countries undertake policies that end this vicious cycle involving the IMF.

The writer is an Assistant Professor of Economics and Research Fellow at CBER, Institute of Business Administration (IBA), Karachi. He can be reached at anakhoda@iba.edu.pk