With the world's attention currently focused on the migrants in Ukraine, the international community should not overlook the misery of about 1 million Rohingya refugees currently living in camps in Bangladesh. 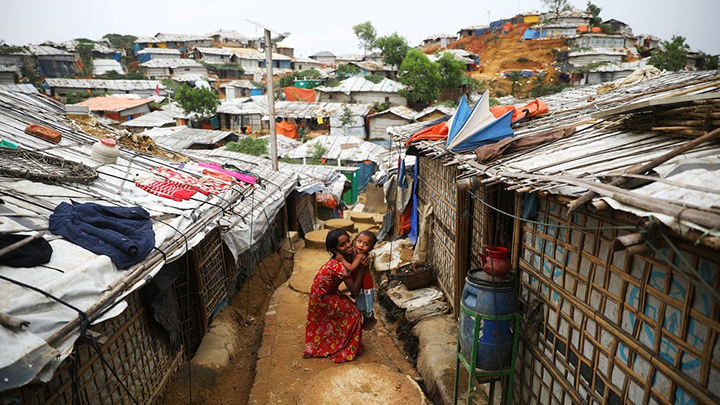 Russia invaded Ukraine on February 24, 2022, escalating the Russo-Ukrainian War, which had started in 2014. With more than 6.5 million Ukrainians fleeing the country and a third of the population displaced, the invasion has triggered Europe's fastest-growing refugee crisis since World War II.

While the perpetual plight of the Rohingyas has been overshadowed by such major events as Covid-19 outbreak, Myanmar's military coup in February, Afghan refugee crisis and now the Russia-Ukraine war, the community of Rohingyas remains in limbo, with many of its members denied of citizenship and the rights that come with it. More than a million Rohingya refugees have been living in Bangladesh since 2017, while others have sought sanctuary in other countries.

When the Myanmar military began a cleansing operation against Rohingyas in 2017, several members of the community were forced to flee Myanmar. Rakhine state was particularly tense, with tales of rape and murder against Rohingyas abounding. The International Court of Justice has charged Myanmar with genocide over these atrocities. To make matters worse, the community's living conditions in refugee camps in Bangladesh are deteriorating.

Due to the extended ambiguity surrounding their repatriation to Myanmar, Rohingya refugees in Bangladesh are becoming frustrated. Such ambiguity poses a significant risk because it helps many people to engage in illegal activity.

Bangladesh confronts increasing difficulty in managing the displaced people as foreign support for the Rohingyas has dwindled to a large extent, with little hope of their repatriation in the near future.

Following the ongoing Ukraine crisis, the Taliban's takeover of Afghanistan, which has already displaced millions of Afghans both inside and outside the nation, another humanitarian crisis has emerged.

While many in the world community have correctly condemned Myanmar's junta for deposing an elected government, the Rohingya's situation must not be overlooked. The international community must demand justice for the Rohingya in addition to a restoration to representative rule in Myanmar. Despite the fact that members of the Muslim Rohingya population claim generations of roots in the country formerly known as Burma, Myanmar's ruling generals have long promoted the xenophobic stereotype that they are "outsiders" in the Buddhist-majority country.

Bangladesh is home to nearly 1.1 million forcibly displaced Rohingyas, the majority of whom arrived on August 25, 2017, following a murderous crackdown by Myanmar's army which is described as a "textbook example of ethnic cleansing." International community should have always taken the safe repatriation of refugees seriously. Bangladesh’s administration began diplomatic attempts to return them and negotiated agreements with Myanmar. However, even five years later, not a single Rohingya has returned to their homeland for fear of persecution. It appears that Bangladeshis are paying the price for expressing sympathy for a persecuted minority community in another country.

The host country has done everything. It wants to ensure Rohingyas return through peaceful means, but nothing has worked out so far. It goes without saying that voluntary repatriation of Rohingyas is the most sustainable and long-term solution to the situation. However, because of the Rohingyas' lack of faith in the Myanmar government, repatriation attempts failed twice in November 2018 and August 2019.

Myanmar must ensure that Rohingya refugees are not persecuted upon their return in order to facilitate voluntary repatriations. To this aim, the international community and the United Nations should increase pressure on Myanmar to create a safe, secure, and dignified environment for the Rohingya refugees to return home. World anticipates the international community should play a more assertive diplomatic role in pressuring Myanmar to return the Rohingyas.

The UN High Commissioner for Refugees, Filippo Grandi, has stated recently during his visit to Bangladesh that while focusing on the "catastrophic disaster" in Ukraine, they must not forget about other challenging situations across the world, such as the Rohingya crisis, which requires immediate attention and plenty of resources.

Despite new financing to Ukraine in response to an "exceptional humanitarian situation," the US is committed to continuing to support Bangladesh in the Rohingya crisis, according to a top USAID official who visited Rohingya camps in Bangladesh on May 11, 2021.

"We are dedicated to maintaining our support for the Rohingya response," USAID Deputy Administrator Isobel Coleman told a small group of journalists at an American Centre press conference in the capital before ending her 5-day visit to Bangladesh. She continued, "We have a very fundamental approach to humanitarian response, and ensuring that the refugees (Rohingyas) who are here receive the basic necessities to meet is a priority for us."

Hundreds of thousands of Rohingya refugees and host communities in Bangladesh, as well as Rohingya and other conflict-affected persons in Myanmar, will benefit from an additional €22 million in humanitarian help from the European Commission. Protection services, food aid, nutrition, health, and shelter and all other benefits will come from the investment.

Since 2002, the EU has been actively assisting people in Bangladesh (since 2002) and Myanmar (since 1994), with particular focus on disaster preparedness and emergency response activities, providing life-saving assistance to Rohingya refugees, and funding emergency aid to people affected by natural disasters.

Rohingyas need more assistance from the international community. They've spent the last five years telling the world about their situation and repeating the same stories. They've gotten nothing but compassion and hollow promises in exchange.

With the world's attention focused on the migrants in Ukraine, we hope the world should not overlook the misery of about 1 million Rohingya refugees currently living in Bangladesh.

The international community's plea for repatriation to Myanmar must be louder, more visible, and more frequent. Bangladesh's government must continue to ensure that any transfers are entirely voluntary. Any long-term solution must take into account the local and national context. But flow of humanitarian assistance must be ensured till then because they need to fulfill their basic needs. They have a right to survive with dignity because they are also human beings like us. However, the peaceful and sustainable repatriation of the Rohingyas in Myanmar is the final solution. But till then, Rohingyas need to survive! Please don’t forget them.

Hailing from Mandalay, Myanmar, Kyaw Min is a human rights activist, educator, freelance writer and researcher. Currently based in Kuala Lumpur in Malaysia, Kyaw Min has completed his postgraduate degree in International Relations from Myanmar's Mandalay University. He can be reached at kyawminmandalay55@gmail.com