No End in Sight

In Sindh, the coastal areas of district Thatta and Sujawal continue to face drought-like situations with no hope of respite for its residents. 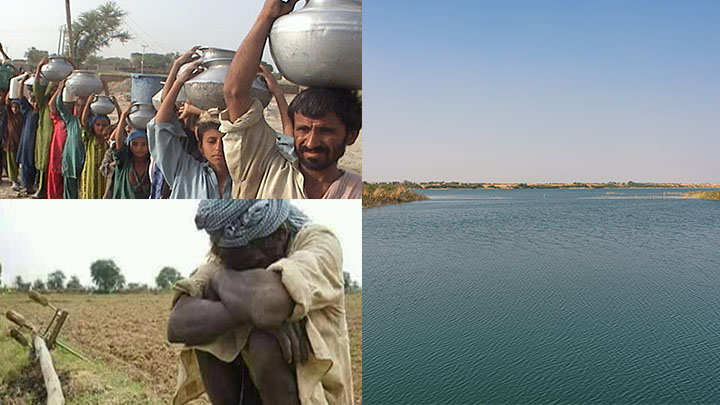 Following tenacious water scarcity across the province, the coastal areas of district Thatta and Sujawal continue to face drought-like situations with no hope of respite for its residents so far. The ongoing water crisis has forced hundreds of families living in these areas for years to migrate to safe areas. The future of the coastal region has plunged into darkness as there is no effective strategy on the part of the state to rid them of this long-standing issue.

Coastal areas of both districts including Keti Bunder, Kharochan, Jati, Ghorabari, Bagar, and Shabunder have been experiencing the worst environmental changes for the past two decades following hot weather and non-release of the required quantum of water Kotri downstream. These changes have dealt a serious blow to growers in the shape of huge economic losses that they bear every year.

Residents of these areas sharing their ordeal with The South Asia  said that their lands had turned barren and brackish due to the "spell" of water shortage in the coastal region that had pushed several crops to extinction.

Abdul Razaq temro of village urs temro said that the coastal areas including Jati, Keti Buder, and Sokhi Bunder was known across the subcontinent for producing different varieties of paddy and red rice that were exported to different countries but unfortunately abrupt environmental changes and water shortage deprived their area of this rare specie of paddy.

"The coastal area also had the potential of producing different kinds of pulses and vegetables but as the water crisis deepened these vanished into oblivion", said Zahid Ishaq Sommro a local analyst. Talking about the rich past of the coastal region of the Thatta and Sujawal he said that there used to be orchards of Mango, Creek, Orange, and lemon but the cyclone of 1999, heavy rains of 2003, and a flash flood of 2010 left a nasty effect on these orchards and now these orchards were rarely found in the coastal areas. Growers of these areas also cultivated Turmeric, Red-Sugarcane, and corn, and since there was a demand for these three crops in local markets it became a major source of earning for them; said Allah Bachayo Jat a local grower adding that "now these crops are part of history for us". Sharing the current scenario about paddy cultivation in these areas Qasir Chandio said that cultivated lands were waiting for water and in the wake of the current state of affairs, the cultivation of paddy could be delayed. Sharing views about the reducing number of mangroves across the coastal belt Zahid Ishaque said that it had occurred owing to the non-release of water. He urged Bilawal Bhutto Zardari, the Foreign Minister of Pakistan to take notice of the current situation and take measures for reviving the lost glory of coastal areas.

The writer is a freelance contributor. He can be reached at kamran.khowaja338@gmail.com