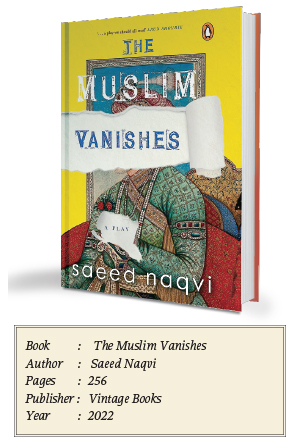 Saeed Naqvi is a senior journalist and television commentator. Naqvi has written three books and his latest literary venture ‘ The Muslim Vanishes’ is a play, written in three acts, spread over two days. What would happen if the Muslims of India suddenly vanished? Most of us acknowledge that Indians, including Hindus and Muslims alike, built and continue to build India. Yet, not everything known about the past is factual clarity. Whatever we know about the Partition is through old tales from the relevant generation or the media – and these opinions are generally skewed. Facts, fiction, and opinions are more than a mere thriller in this book.

Of all the Muslims who went to Pakistan after the Partition, nearly 20000 returned, by March 1948. Why? Because they didn’t like the country they had gone to. The dilemma of these returnees was terrible. The properties they had vacated while departing had been occupied by the arriving Hindus. Restrictions on Hindus leaving East Pakistan left the ones coming from West stranded and vulnerable. In other words, Muslims from West Pakistan were not welcome but Hindus from East Pakistan were. These are meaningful details. Muslims in other parts of India stayed where they were. Only limited numbers went, or were sent, to the secretariat in Karachi, which was Pakistan’s first capital. Added to all these complications are the two interconnecting triangles in the hands of politicians—resulting in a cauldron bubbling with hate. One triangle is the caste pyramid. And the other one is composed of three sides—India–Pakistan, New Delhi–Srinagar, Hindu– Muslim—all contributing to a mess of issues, none of them getting near to resolving.

The play opens from the studio of a news channel with a junior journalist telling the anchors that all the 200 million Muslims have suddenly disappeared. After incessant debate, it appears that no one knows where they have gone. In the midst of all the chaos, the great Mughal monument Qutub Minar has disappeared too, along with Muslims who were imprisoned in Tihar jail. As we read on, we discover that a section of the Indian population is relieved of this disappearance, for the wealth that the latter have left behind will be divided among the Hindus, including homes, farms, land, businesses, cowsheds, etc. The characters debate the actual reasons behind the injustices imposed on the second largest population of India. The chaos continues as they question the result of elections, the impact of departure of Urdu and Persian works by great poets like Ghalib and Mir, paintings and artwork and Mughlai food.

Towards the end, a court is set up to resolve the matter, brilliantly relaying the bold and bitter imagination of the author. The jury comprises Akbar’s Navaratnas, which includes the spirits of the ancient multiculturalist era, Sant Kabir, Mahatma Phule and Tulsidas while Amir Khusro is chosen as the spokesperson – who speaks of Mughals in the subcontinent, the Golden Muslim Era, and how Hindus have been treating the Muslims now. Judicial proceedings follow through examination and cross-examination, revealing the diverse history of Hindustan. The overwhelming speech ends as the jury gives the verdict of returning of Muslims to India. The book is short, engaging satire, talking about complexities of the Partition and the making of the Indian constitution, the politics of conversion, removal of special status of Kashmir, cultural renaissance and mystic syncretism. It is a plea for empathy towards the tyranny Muslims and Kashmiris are subjected to.

The book touches upon the current socio-political atmosphere– what will be the power equation if the lower caste leads in the elections; the dire consequences India could face in the form of identity and secularism if it lets go of the Muslim population. It shows how society is still polarised over caste, religion, etc. - how religious intolerance and persecution are still prevalent. It is all the more relevant in the chaos of brew which has become even more toxic when the global war on Islamic terror synchronized with Hindu–Muslim tension. As politics has injected prejudice in the way we think about these subjects, it is important to read this book as it has all the answers.