The Maldives is fighting extinction through judicious climate-change planning. 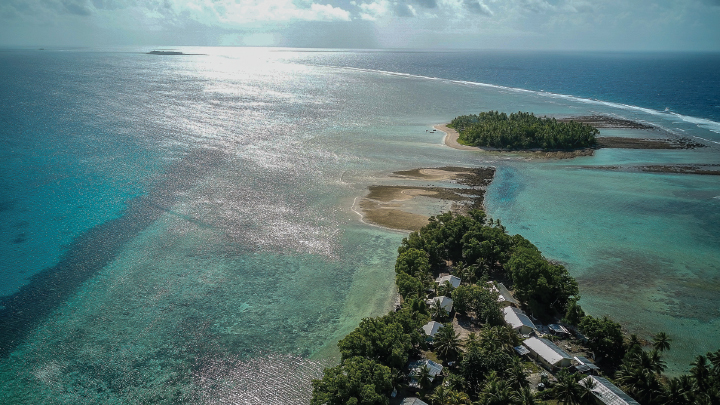 The Maldives, the 6th smallest island state in the world in terms of land-area and the smallest South Asian developing country, home to over half a million people and three time as many tourists every year, is faced with the existential threat of being swallowed by the sea by 2050. This poses an ominous crisis for over 550,000 men, women and children. Should they abandon their homeland as climate-migrants in search of a new abode. It is pretty much certain that global temperatures are likely to rise at least in the next 2 to three decades. Sea-level rise driven by melting of polar ice sheets, alpine glaciers and thermal expansion of seawater will continue. Even if the present rate of 3-4 mm per year sea level rise remains unchanged, say for the next thirty years, the future of the islanders in general and particularly those living in tiny Small Islands Developing Sates (SIDS) like the Comoros, Maldives, Mauritius and Seychelles, presents a looming risk of having to be relocated elsewhere. It’s time for urgent global attention including monetary and technical support from the developed countries to help the endangered islands and their people before they become extinct.

Most island countries, with clear greenish shallow waters, clean white beaches, water sports, and other attractions, are often the top choice of tourists. Maldives offers a fascinating view in the form of beautiful coastal lagoons, captivating coral reefs, colorful marine life, mangrove forests and a variety of sports. It is, therefore, not surprising before the onset of Covid-19, annual tourists crossed 1.5 million, which accounts for over one quarter of the Maldivian GDP. In 2020-21, the inflow of tourist dropped substantially but now it is catching up once again, and with UN and other international funding agencies, it is hoped this paradise is conserved and protected.

The Climate Risk Country Profile of the Maldives published by the Asian Development Bank 2021, puts the country’s mean annual temperature between 25-31 ℃. The temperature is relatively warmer toward the northern part of the country. Besides the warmer temperature, the northern atolls also experience droughts and frequent cyclones. In comparison, the southern islands receive more rainfall than the north but also faced with more floods. Except for the months of February, March and April, the country receives about 200 mm of rainfall per month, most of it caused by the southwestern monsoon rain system from May onwards. The average daily temperature of the same three months remains above 28℃, but in the remaining months it stays between 27℃ and 28℃. One study shows that nearly 45% of settlements, 42% population and over 70% of the crucial infrastructure lies within 100 meters from the coastline, hence highly vulnerable to tidal and storm surges and extremely vulnerable to tsunami.

Given that the Maldivian archipelago, made of 1190 coral islands, spread over almost 90,000 square kilometers of the sea-area but only 190 inhabitable islands accounts for 298km2 of land-area with average ground elevation within 2.5 meters of the mean sea level. As such it is exposed to extremely high risk of inundation from meteorological tides, sea swells, storm surges and tsunami. The Indian Ocean Tsunami of Dec. 2004, that swept over most parts of the country and triggered acute shortage of freshwater lasting for nearly a decade, is considered the most destructive disaster in recent history. A more recent disaster was caused by a tropical cyclone ‘Nilam’ from the Bay of Bengal that struck the Maldives in October 2012, severely flooding dozens of islands and affecting over 30,000 people. Besides, heavy floods during the summer monsoon frequently cause beach erosion, destroy infrastructure and cause heavy loss to both the fragile economy and ecology.


In the wake of these disasters the government of Maldives undertook various policy and legislative measures to adapt to climate change impacts and protect the people and country from devastation and likelihood of total submergence. The National Adaptation Plan of Action (2008), Strategic National Action Plan for Disaster Risk Reduction and Climate Change Adaptation Plan 2010-2020 (2009), and Maldives Climate Change Policy 2015, are notable policy initiatives. Besides this, there are Disaster Management Act (2015), Community Based Disaster Risk Management Framework (2014), National Framework for Managing Internally Displaced Persons in the Maldives (2013), Health Emergency Operation Plan (2018), and the ongoing Maldives Climate Change Policy Framework 2014-2024. These policies and Acts indicate that the Maldivian government is fully sensitive to disaster risk reduction not only by involving local communities in management but their mainstreaming in the country’s development agenda.

Under a 4-years UNDP-GEF supported project for the Maldives government under Coastal Zone Development Program costing US$ 9.3 million ‘Integrating Climate Change Risks to Resilient Island Planning Maldives’ (ICCR). The approach adopted for protection of coastal zones was through soft and nature-based interventions instead of constructing hard infrastructure. This was a significant shift in policy. It included planting mangroves and enhancing coastal vegetation, beach nourishment, and coral propagation around existing islands. Eight primary sectors were identified for intervention as most vulnerable to climate change impact. These included human settlements, critical infrastructure, tourism, fisheries, health systems, water, food security and coral reef biodiversity. The program closed in 2015 after an overall assessment of the progress as non-satisfactory.

During the world leaders’ summit at COP26, held in November 2021 at Glasgow, the President of Maldives, Ibrahim Mohamed Solih, emphatically reminded leaders of developed countries to fulfil their pledge under the Paris Agreement of donating US$ 100 billion to the most affected nations. Earlier in 2019, he had also unveiled the new development model ‘Maldivian Climate Smart Resilient Islands Initiatives at the UN General Assembly in Sep. 2019. The world looks forward to seeing a safe, protected, serene and prosperous Maldives.

The writer is Advisor to the Quality Assurance Program, Higher Education Department, Government of Khyber Pakhtunkhwa. He can be reached at srsyed55@gmail.com