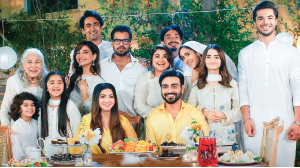 The serial is a light-hearted romance, a comical family drama.

Similar to the previous Ramadan sitcoms, Suno Chanda and Chupke Chupke, Paristaan sends the audience into fits of laughter and tears at the same time.

Pari lost her parents and lives with her mamoo. Her mumani is a strict disciplinarian but soft inside. Her crude language and funny insults may seem hurtful. She may be blunt yet her razor-sharp words are layered with sweetness and wisdom that cannot be ignored.

Kamali is not rich but is a lovable character. His funny antics and witty lines end the audience into squeal of laughter.

Pari, on the other hand, is a charming young lady. Simple and talkative, she attracts the attention of the men around her. Arsam is a rich man who is chachoo to two innocent children. Rigid, arrogant and angry, he is a heartless, ruthless and insensitive man.

Pari and Arsam run into each other and the heartbeat races. The writer hints at the chemistry between the two! Zubaida is a maid at Mamoo (Saifi Hassan) and Mumani’s (Haseena) house.


In comes Amanullah and Cupid strikes here again. In a beautiful moment of romance, they both fall into each other’s arms. Mira Sethi has done a remarkable job with the Punjabi accent. Her entire get-up from the role as a maasi deserves to be lauded.

Ujala is Mamoo’s daughter. She too is in love. Pari enters as Ujala is talking to Aazir. Ujala is a young, pretty and good-hearted girl. With a kind demeanour, she is the peace-maker in the house. When Mumanis’s harsh words hurt Pari, Ujala always gives her a ray of hope, asking her to stay positive.

Just as the audience feels a surge of relief wash over to see the confusion being resolved. The writer brings in another twist. Enters Rakhshanda who too falls for Kamali. She is a style icon. With designer sunshades on her head, rolled hair flitting in the air, and a dolled-up face, the writer is darned at how she could fall for someone who was lower in class than her! Do such things happen or is it an exceptional scenario? Is money important over love or vice versa? I leave this for the reader to decide? Choose wisely!

‘The story is full of comedy, romance, emotions, and entertainment.’ Indeed, a great play! Hats off to the entire cast and crew for coming up with a captivating and mesmerizing production.

It points to an important belief in our society of superstitions, jinns and myths.

Will the play be able to break these false beliefs?.