There is a lot of room for a third political party in India. 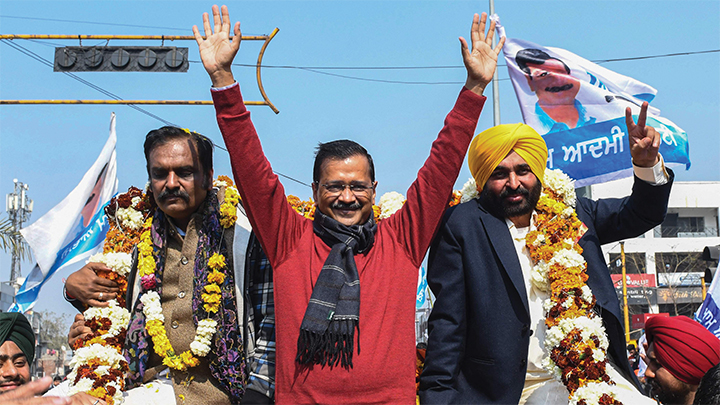 The Indian Punjab has historically been dominated by the Indian National Congress party. However, the lately incumbent BJP and the Congress have been fiercely battling in the state. To their utter surprise, the Kejriwal-led Aam Aadmi Party (AAP) swept recent elections and formed the government in the state.

AAP is just ten years old but has defeated not only the dominant parties but also families like that of Badal. Merely a decade ago, the party came into power in Delhi. It is indeed Kejriwal’s slogan for anti-corruption, institutional reforms, poverty alleviation and job creation and rejection for communal politics that has appealed to the population. Moreover, it’s popularity is increasing multi-fold, especially in those states where the BJP and Congress are predominantly contesting.

These new dynamics of Indian politics are portraying a picture of tectonic shift that is rejecting communal politics propagated by the Modi-led BJP that has sown the seeds of discord in the Indian social fabric.

AAP has proved to be somewhat of an alternative to the BJP in some parts of India. Punjab was long dominated by the Congress. Nevertheless, the rise of AAP which swept elections was a shock for the Congress and BJP alike. They had not expected their downfall and rise of Kejrewal so suddenly and so surprisingly. AAP has won 92 out of 117 seats for the state legislature. It was a big upset for current CM Charanjit Singh Channi, who contested on two seats and was defeated on both of them; other than him, five-time CM Parkash Singh Badal, two-time chief minister Amarinder Singh, and Congress heavyweight Navjot Singh Sidhu also met the same fate.

Congress appointed Charanjeet Singh Channi, a Dalit leader keeping in view that Punjab has the highest Dalit population - some 30%. In their view, they had secured the 30% vote bank by nominating a Dalit leader. Consequently, it would be a smooth sailing for the party. Congress Punjab leader Sindhu was also hopeful that Punjab was Congress-dominated, hence the victory was certain for their party. To their utter shock, things turned otherwise.

The farmers protest against the Modi regime, was a time that provided a unique opportunity to the then ruling Congress to further consolidate their hold in Punjab by gaining the sympathy of agitating farmers. Nonetheless, they could not seize this opportunity. It remained a house divided in Punjab state. Additionally, its local chapter followed high command orders and a handful of people dictated the strategy that was divorced of ground realities.


On the other hand, AAP responded effectively to the masses’ demands. Even though it was defeated in the state in 2017 elections, it was not daunted and launched an aggressive campaign and bounced back. When the AAP won elections in Delhi in 2013, Rahul Gandhi was of the view: “We will learn from AAP’s success.” They did not learn from the AAP and lost ground to the nascent party.

AAP is targeting states where Congress and BJP are fighting. As a result, it is making significant headway. People were disenchanted with the two mainstream political parties – Congress and BJP. AAP founder Kejriwal is viewed in positive light in India keeping in view his narrative of socio-economic uplift combined with his performance in Delhi as the Chief Minister.

His growing popularity also indicates the fact that the people are disappointed by the two national parties that are ruling for decades. However, they have miserably failed to meet the public’s expectations and to resolve their basic problems. For instance, when the pandemic swept across India, ad hoc and short-sighted measures were taken instead of resolving the crisis holistically. This gave rise to a severe human catastrophe. People who were at their workplaces far away from their homes were badly stuck, and many had to struggle to get back to their families on foot. Sudden lockdowns created a panic situation. As a result, they were forced to take any mode of public transport and trains were overcrowded. The situation worked as a super spreader of the virus in India.

The BJP’s arrogance, communal and divisive politics and poor governance is being effectively responded to by AAP. This new party and its governance is being appreciated across castes, classes, religions, and states. Syed Ahmed Bukhari, Shahi Imam of Jama Masjid Delhi, appealed to vote for AAP because it was “honest and secular”. In response, AAP clarified that it did not require any support. This prompt response has further added to the young party’s credit that it does not favour communal politics.

This tectonic shift in Indian politics highlights a critical need for the third national party that could be a possible replacement of the BJP and Congress. The people are clearly dissatisfied with the existing dispensation. AAP is inching slowly and gradually towards national politics. However, the question remains: whether it will continue to come up to the expectations of the people, or will it reverse becoming a traditional party over time, like the BJP and Congress? But certainly, AAP has become a new hope for India.

This writer is a freelance contributor, currently pursuing postgraduate studies at the University of Strathclyde in Glasgow, Scotland. He can be reached at amjadsiyal@hotmail.com