Taken for a Ride Again!

The MQM is like a ping-pong ball. It is thrown back and forth as the situation demands - and the people of urban Sindh simply suffer. 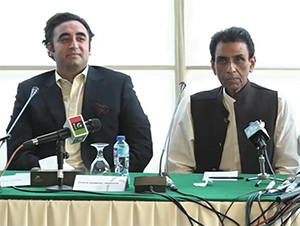 MQM had a love-hate relationship with Pakistan Peoples Party for decades, with cooling off periods of varying duration in-between. However, the most recent parting lasted much longer and seemed to be permanent, because the magnitude of events leading to it had crossed all previous limits.

The last round started in August 2016, when the exiled MQM leader Altaf Hussain made a fiery telephonic address – perhaps in a state of intoxication – inciting his followers against the media. And under his spell, MQM workers started violent protests, even attacked some media outlets and also clashed with the police. Then Rangers started an operation against the MQM, arrested nine leaders and later sealed the MQM secretariat Nine Zero.

However, MQM leaders in Pakistan distanced themselves from Altaf Hussain and eventually made a complete break from the London setup. To mark this event, MQM added the suffix ‘Pakistan’ to its name, making it MQM-P while Altaf Hussain’s London setup was known as MQM-London.

MQM splintered into MQM-P, led by Dr. Khalid Maqbool Siddiqui, MQM (Haqiqi) headed by Afaq Ahmed while Syed Mustafa Kamal – with wonderful performance record as Karachi mayor – formed a new party called Pak Sarzameen Party (PSP). It is pertinent to mention here that while MQM-P and MQM-Haqiqi maintained Mohajir identity, Mustafa Kamal’s PSP is not ethnicity-based and embraces all Pakistanis. It is about time other factions followed PSP’s lead, and joined hands for common good, and to better serve the masses. It is interesting that Dr. Farooq Sattar is seen nowhere in any of these parties.

I still feel there is nothing wrong with a community calling itself Mohajir so long as this is done only to identify the community with its distinct language and culture. I would like to give here the example of ‘Jamiyat Punjabi Saudagaran-e-Delhi’ in Karachi which, despite multiple migrations spreading perhaps over a couple of centuries, still likes to carry its original ethnicity. No one should really object to it so long as they, and all of us remember that we are all Pakistanis, with equal rights and obligations.

I would also like to mention here that Urdu-speaking migrants to Pakistan were not really ethnic-minded and the fact that MQM was not formed until 1984 proves this. The MQM emerged as a response to the rising marginalization of Urdu-speaking migrants from India, started during Ayub Khan’s rule, and continued thereafter in urban Sindh, especially in Karachi, through ittehads (alliances) of various ethnic groups. 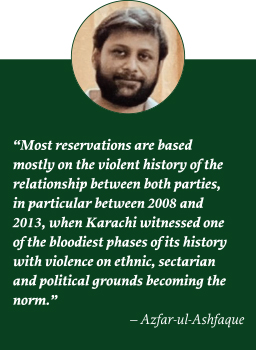 However, it was an even greater travesty of justice that after becoming powerful, the MQM, which had stood against persecution of the Urdu-speaking people, itself started abusing power by committing atrocities against people of other ethnicity, not sparing even those of its own ethnicity who dared oppose its excesses or differed with its policies. Of course, this state of affairs could not be allowed to continue and the authorities moved in to bring things under control.

The introduction is rather longish but it will help us discuss sensibly the ‘Charter of Rights for the people of Sindh ‘ signed by the PPP and MQM-P recently.

The agreement is supposed to develop a long-term partnership between Pakistan Peoples Party and MQM-P to ensure, in due course, the implementation of the Supreme Court’s decision regarding local governments, which is to be implemented in letter and spirit within one month, but is subject to mutual agreement (which could prove problematic).

One must not forget that the real motive behind the agreement was to secure MQM-P’s crucial support for the no-confidence motion, which objective has been ACHIEVED.

There is also an agreement about the 60:40 urban/rural Sindh quota for jobs, addressing the issue of fake domiciles, local policing, developing Sindh and Karachi in terms of infrastructure and transport, and increasing investment in the health and education sectors.

The agreement is quite comprehensive and if fully implemented, it will remove almost all grievances of urban Sindh residents. However, the fate of various agreements made in the past, the views of the PPP supremo about the ‘status’ of agreements generally, as well as the conflict of interest could prove stumbling blocks. The absence of any time-frame - except for the LG system - and description of the relationship as a long-term partnership raises questions. Also, while the actual population of Karachi is about 30 million – as against the census figure of 16 million – will it form the basis for a 60:40 quota for jobs (and assembly seats. One must not forget that the real motive behind the agreement was to secure MQM-P’s crucial support for the no-confidence motion, which objective has been ACHIEVED.

As usual, various nationalist party leaders and prominent individuals, who are not known for staging protests for the real problems of the people of Sindh, are up in arms, and have declared PPP and PML-N agreements with MQM-P as anti-Sindh.

However, let us not be unduly pessimistic about the agreement.

Also, notwithstanding the conceited views of the present leadership of Peoples Party about itself, the sad fact is that under its management, the party has been downgraded from a federal-level party to one confined to the interior of Sindh. And that means the party’s recent policies have failed miserably and need to be altered drastically if its past stature is to be regained.

And the emerging young leadership of the party, feeling fully-secure financially through the efforts of its elders, may not have such craving for wealth and may instead seek glory, popularity and political stature.

Bilawal is old enough to realize that this is possible only through serving the masses and improving the living conditions of all Pakistanis, starting with the people of Sindh where the PPP has ruled for decades but where, unfortunately, people have suffered just too much, with those from urban Sindh being the worst sufferers in some respects. So, even if only to ensure its own survival and status, the PPP leadership has to adopt people-friendly policies. The party also has to remember that while crafty mannerism can bring some short-term gains, it proves counter-productive in the long run, as demonstrated by the PPP’s present plight.

As regards the implementation of Charter of Rights, we better wait and see how things unfold.