Milorad Dodik, the 7th and current Serb member of the Presidency of Bosnia and Herzegovina, is trying to tear apart the fragile state of Bosnia, which was created over the remnants of a brutal civil war. From his own militia, Dodik is now openly calling for dissolution of the state of Bosnia which, in his own words, is a dysfunctional creation of the Dayton Peace Accords. 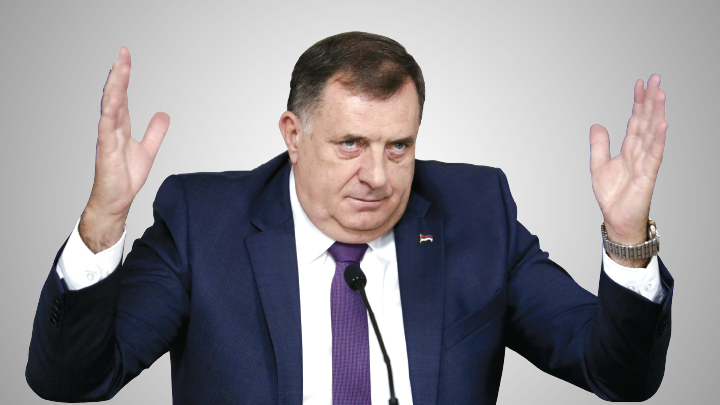 There are three presidents in Bosnia and Herzegovina. One of them is seeking to break away from the country. Milorad Dodik, a staunch Serb nationalist is trying to tear apart the fragile state of Bosnia, which was created over the remnants of a brutal civil war.

Dodik is threatening to dismantle Bosnia’s multi-ethnic army and form his own militia composed exclusively of Serb nationalists. He doesn’t want to pay taxes to the state, does not recognize its judicial system, and does not want to have anything to do with its law enforcement agencies. In fact, he is openly calling for dissolution of the state of Bosnia which, in his words, is a dysfunctional creation of Dayton Peace Accords engineered by the Americans.

The situation seems frighteningly similar to the circumstances that led to the Bosnian war in the early nineties. The conflict claimed hundreds of thousands of innocent lives and displaced more than half of the country’s population.

The war was finally brought to an end with the signing of Dayton Peace Accords in December 1995. The agreement called for cessation of hostilities from all sides, and the creation of a single state of Bosnia and Herzegovina. The state comprised two entities; the Serb majority Republika Srpska (RS), and the Bosniak-Coroat majority Federation of Bosnia and Herzegovina (BiH). The two entities were accorded significant levels of autonomy under a state government. Each of the three main ethnic groups has one president within the country’s three-member presidency elected for a term of four years. An elected council of ministers holds legislative powers.

It is a highly complex political system created with the intent of providing equal representation to the three ethnic groups so that there would be no conflicts in the future. The main objective of Dayton Peace Accords was to end the war. It basically agreed to all the demands of all warring factions so that everyone was happy. The deal succeeded in bringing immediate peace but the lack of accountability and genuine reconciliation meant that the state remained eternally trapped in a series of crises, threats of secession, and appeasement efforts.

This is not the first time Milorad Dodik is stoking nationalist flames in a highly volatile region. He has done it before, only to be cajoled back into the fold by appeasing politicians. However, this time the stakes are higher for Dodik. He could be facing corruption charges if he loses in the elections scheduled for the next year.

The current crisis started last September when the state medicine agency undertook an inspection of oxygen provided to patients in the Serb part of the country. To the shock of the entire nation, it was revealed that the oxygen made available for Covid 19 patients in Republika Srpska was industrial grade, and was not meant for human use. When this discovery was made public, the leader of the Serb region, Milorad Dodik stubbornly declared that he did not recognize Bosnia’s State medicine agency. He further announced that Republika Srpska (RS) will no longer be open to central government oversight.


The conflict further escalated when the High Representative for Bosnia and Herzegovina, Valentino Inzko enacted a law rendering denial of genocide a criminal offense. During the civil war, the Bosnian Serb army unleashed a reign of terror against Muslims. The height of this madness occurred in July 95 when the Serbs executed more than 8,000 men in Srebrenica. The International Criminal Tribunal deems it genocide. Several Bosnian Serb leaders have been convicted for their role in the massacre. In this context, Dodik’s attempts to form an exclusive army for Bosnia’s Serb entity is regarded as a highly explosive move.

Milorad Dodik does not recognize the genocide. Soon after the enactment of the law against genocide denial came into effect, he called for voiding it in Republika Srpska’s regional assembly. He also called upon his fellow Serbs to stop working for all state institutions. At his behest, the regional assembly voted in favour of several provisions allowing the Serb entity to withdraw from Bosnian state institutions.

There are rumours that the police in Republika Srpska are amassing weapons for a possible showdown with the state. These weapons include assault rifles, RPGs and other arms used in large-scale offensives. Dodik has already issued a public warning last October that Bosnian Serbs will ‘defend’ themselves, and their friends (Russia and Serbia) will be available in the event of a NATO onslaught.

Presently, however, there have been no visible signs of support from Serbia. Russia, as usual, isn’t revealing much. Recently, Dodik went to Moscow to meet with President Putin. On his return, he jubilantly announced that the Russian leader pledged full support in the event of a conflict. The Kremlin immediately denied these claims and stated that the brief meeting between Putin and Dodik took place on the fringes of a coal conference.

Kremlin does derive some satisfaction from the prevailing disorder in Bosnia which it regards as a failed EU-US nation building project in former communist lands, but its blunt denial of Dodik’s claim signifies that Putin wants to stay clear of Serb nationalist machinations in Bosnia.

Presently, neither Russia nor Serbia are interested in pushing for an independent Serb entity carved out of Bosnia. For Russia, Dodik and his likes only serve to highlight its own importance during any kind of dealings with the West.

People in Bosnia, whether Serb, Bosniaks or Croats, have had enough of war. They want peace. This was manifest in October last year when thousands of ethnic Serbs came out on the streets of Banja Luka – capital of Republika Srpska – in order to protest against the corrupt practices of Milorad Dodik.

According to Political experts, the situation is serious. Dodik has repeatedly used the secession mantra in order to woo his Serb kinsmen during previous elections. That may not be possible anymore. The only option for him is to really start pushing for secession so that he could remain in power within the isolated Serb entity. Breaking away from Bosnia will culminate in war. Dodik does not have the manpower to take on the state of Bosnia backed by NATO, and even his staunch nationalist support base will not approve of Russian boots in Republika Srpska.

The Western Balkan is regarded as Europe’s Achilles’ heels. In 1914, it was in Sarajevo that a Serb nationalist shot and killed Archduke Franz Ferdinand, heir to the Austro-Hungarian empire. The event became a precursor to the Great War that raged for more than four years, and claimed millions of lives. Ethnic tensions erupted again in 1992 resulting in more bloodshed. Milorad Dodik has brought this region to the forefront of European politics. It is now up to the European nations to find a peaceful solution to this brewing crisis before it explodes again.

The writer is a freelancer and an investment banker based in Karachi. He can be reached at syedatifshamim@hotmail.com