India was once proud of its secularism, a mainstay of the Indian Congress Party. With the Party in a shambles, the BJP has made genocide of Muslims a basic political pillar. 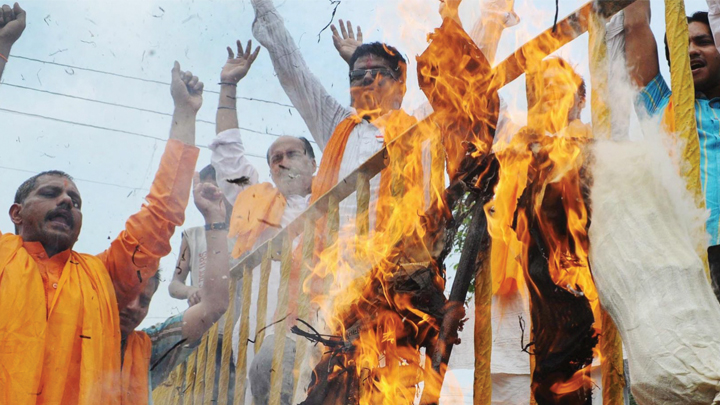 Though anti-Muslim rhetoric had existed in India for some time, and deepened under the Modi-led BJP’s political setup, the recent growing calls for ethnic cleansing of Muslims and violence against them are shocking. Experts and human rights organisations have alarming concerns on the impending genocide of Muslims in India.

Since genocide is not a step but a process, dehumanisation, hate speech and propaganda always precede it against the targeted ethnic minorities. The stage for Indian Muslim’ genocide is being prepared with the abetment of the country’s ruling leadership. This is manifested, apart from other instances, in extremists’ patronized activism and their repeated open calls of violence and massacre of ethnic minorities groups.

The extremists of right-wing Bharatiya Janata Party and its parent organisation Rashtriya Svayamsevek (RSS) vowed to go to any length in transforming secular India into a Hindu Rashtra. The RSS-BJP extremist factions have organised 12 events in 24 months in four Indian states calling for genocide of Muslims in particular and other minorities in general. Muslims of India are on the edge of extermination. Though it will take some time to annihilate the country’s 250 million people.

A three- day Hindu nationalists conference in Haridwar held in mid-December 2021 sounded the provocative anti-Muslim call. The speaker Swami Prabodhananda Giri called the right-wing activists to get ready to kill (Muslims) or get killed. In December last year, a saffron clad Hindu nationalist urged her followers to kill Muslims and protect India. “If 100 of us become soldiers and are prepared to kill 2 million (Muslims), then we will win ... protect India, and make it a Hindu nation,” Pooja Shakun Pandey, a senior member of right-wing Mahasabha, said.

The encroaching of the Indian political landscape by a firebrand and extremist leadership ascending to power through its anti-Muslim tirade substantiates the growing fears of Muslim genocide. Yogi Adityanath, the fire-breathing BJP monk, is leading UP, India’s largest state to war against Muslims. This isn’t new to him as he had already threatened of Muslim genocide. “If they kill even one Hindu, we will kill 100 (Muslims).” 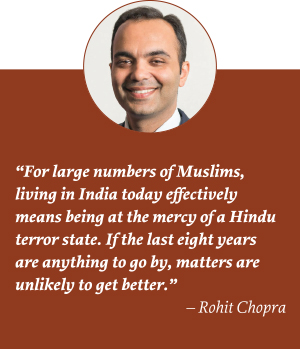 The rule of law is almost non-existent in all BJP-controlled states as political and religious leaders instigate violent mobs against Muslims. Hindutva extremist attack them in mosques, streets and even homes. Police sponsored mob vigilantism and violence continues unchecked in Delhi, Gujrat, UP, Uttarakhand and Karnataka, among other states. Even police personnel are seen joining the mobs.

Attacks by Hindu supremacists on Muslim vendors have been surging over time. Mobocracy and vandalism is becoming to be normal. Muslims in the States of Gujrat, Jharkhand, West Bengal and Madhaya Pardesh were recently attacked on the occasion of the Ram Navami birthday festivities. They kept chanting provocative slogans against Muslims and other minority groups. Dozens of videos made rounds in social media, showing saffron-clad processions of Hindu supremacist armed with clubs and swords, playing aloud provocative and threatening songs in Muslim neighbourhoods. Eruption of violence in Khargone resulted in the burning of 10 Muslim houses and left 24 people, including a police officer, injured.

Amidst this, experts from Amnesty International, Genocide Watch and human rights organisations have made an alarming prediction on the surging Islamophobia under Modi and the subsequent threats of extermination of ethnic Muslim minorities in India.

Dr Gregory Stanton, the director and founder of Genocide Watch, has claimed in a US congressional brief that there are clear “signs and processes” of pogrom in Assam and Indian occupied Kashmir. The policies Stanton quotes have accelerated the process and prospects of ethnic cleansing of Muslims in India and include the undoing of autonomous status of Kashmir and Citizenship Amendment Act, that excluded Muslims from citizenship.

Representing his organisation that he formed in 1999 with objectives of predictions, prevention and accountability of excesses against humanity, he warned that genocide in India is quite imminent. He drew a parallel between the discretionary treatment of Muslims by Indian Prime Minister Narendra Modi and that of the Myanmar government against Rohingya back in 2017. He feared the identical scenario to Myanmar where Rohingya Muslim’s citizenship was revoked, followed by violence and massacre.

“What we are now facing (in India) is a very similar kind of plot (as witnessed in Myanmar),” he said. Terming Modi an extremist leader and the Hindutva ideology being contrary to Indian secular history and constitution, he said that we cannot let (genocide of Muslims) happen in India.

Genocide Watch also warned of pogrom in India in 2002 following the Gujrat massacre that mercilessly killed over 1000 Indian Muslims.

Stanton is the expert who had predicted the pogrom of Tutsi in Rwanda in 1989 and had warned Juvénal Habyarimana, the then Rwandan president, that if he did not take measures to prevent the impending massacre, there would be genocide within a span of five years. Stanton’s warning proved prophetic with the ethnic cleansing of 800,000 Tutsis in Rwanda in 1994.

Given his proven expertise in accurately predicting genocides, his warning shouldn’t be taken lightly.

“That the participants [at the gathering] would openly urge Hindus to emulate the violence against Rohingya Muslims and boast about it in the days afterwards in the media is illustrative of the atmosphere of bigotry that pervades these groups,”. “The calls to large-scale massacres of Muslims [aim] to institute Hindu supremacy over India,” Acharya said.

Aakar Patel, a rights activist and former head of India Office’s Amnesty International, suggested reports that there to be taken seriously.

“I think the history on the record of India’s civic violence shows either the state does something that provokes the violence (against Muslims) or does not do enough to stop it,” Patel said.

Moreover, renowned American scholar and professor Noam Chomsky has also expressed grave concerns on the lethality of Islamophobia in India, which has reduced around 250 million Muslims into a persecuted minority.

“The pathology of Islamophobia is growing throughout the West — it is taking its most lethal form in India” the renowned activist and author said in a webinar video message organized by a Washington-based Muslims advocacy group.

More worrying, however, is the deafening silence of the Indian government and even its support of Hindutva extremists bent on the ethnic cleansing of Muslim minorities, among others. Amidst all this mayhem, police failed to find any conspiracy against Muslims. Rather than taking action against extremist leadership and instigators of violence, they swiftly arrest journalists and peace activists.

Raqib Hameed Naik, a US-based journalist who recently interviewed the United Nations special adviser on Prevention of Genocide, said that the BJP leadership has clear support for Hindutva’s excesses against Muslims of India.

“Those who are calling for genocidal massacres are in one way or the other linked to BJP’s ideological mentor, RSS, and revered by the senior party leaders who hold top constitutional offices. In other words, Mr Modi’s silence means an endorsement,” Naik explained.

All reports, predictions and ground realties portray a bleak picture for the Muslims of India. Given that various states are going for elections, anti- Muslims tirades and bigotry are expected to rise in the coming days. The growing radicalisation, genocidal and provocative speeches and anti-minority sentiments would make massacres not a distant reality.

The writer is based in Kandhkot, Sindh. He can be reached at alihassanb.34@gmail.com