The corrupt opposition got the better of an honest Imran Khan. 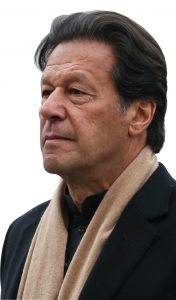 When Imran Khan, after winning the World Cup in 1992, came back to Pakistan, the country was being governed by Imran Khan’s latter day nemesis, Nawaz Sharif. He governed Pakistan as his fiefdom and there appeared to be no prospects for change. Imran then launched his Shaukat Khanam Cancer Hospital project because of the goodwill that he had been able to generate amongst the people and the credibility that he had earned and the money just poured in. At the same time, the social media that had just started blossoming became abuzz with Imran Khan’s exploits and his statements about him wanting to do something for the country.

It took some time before he launched his party, appropriately named as Tehreek-e-Insaf (Movement for Justice). Initially, he attracted a number of people to his party who were looking for someone with charisma and a reputation for incorruptibility, who could set things right in the country. Those that he attracted in the initial years were mostly retired government servants, senior armed forces officers, lawyers and intellectuals. Their general impression was that even though Imran, while being at Oxford may have spent more time on the playing field than in the library and thus lacked intellect, he was still a good man and a doer. These stalwarts who joined Imran initially ignored his penchant for projecting himself and for being convinced that he was the best, even though these traits of his were by now well known because of his famous remark upon wining the World Cup viz. “I won the Cup”. These stalwarts wanted to give him the benefit of doubt and thus took these remarks to be a mere aberration.

Launching of the party did not make much impact on the political scene and the event went unnoticed. Consequently, when he contested the first General Election in 2002, he won only one seat, that too, his own. One of the reasons why he did not succeed as per his expectations was that he had no money. But then his expatriate friends abroad, mostly in the UK and USA, came to his assistance and managed to use their expertise in the management of finances to transfer a great deal of funds. Then, to his good fortune, Jehangir Tarin with his vast resources and a private aeroplane to boot, fell under his spell and Imran was launched literally as his ability to travel within the country was greatly enhanced due to availability of a private plane.

It is at this time that the Panama Leaks took the third world countries by storm. The matter of money laundering and accumulation of foreign funds by the Sharif family was brought to the forefront. With the instinct of a hound Imran went for the jugular of the Sharif empire and was on a container, for days on end. His speeches from the container, though often abrasive and even iconoclastic in so far as political hierarchy was concerned, were nevertheless inspiring to the younger population in the middle and lower middle-class bracket.

However, in spite of all his eloquence, these speeches were not sufficient for him to be put in the driving seat. Then, suddenly, he was noticed by the Establishment because of his clean record and lack of any previous connection with the political families of Pakistan and also because in him they saw the opportunity to counter the pusillanimous approach of Nawaz Sharif towards India. This was obviously for the reason that being a businessman Sharif thought it was good for business to be at peace with India and to lower the temperature on the border, including that of Kashmir.

Having thus been noticed, the Establishment lent their full support to Imran from behind the scenes and ignored the reigning Sharifs. It is in this scenario that the 2018 General Elections were held when the electables were brought to the round-table of Imran, who gleefully grabbed the opportunity but, in doing that, he lost the support of earlier stalwarts who were his genuine, sincere and capable supporters but now felt ignored. It is thus that Imran was launched on the political scene of Pakistan. 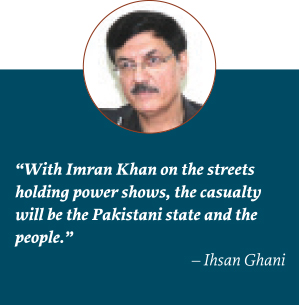 What followed then can easily be the stuff of fairy tales. Imran became the darling of the youth, men as well as women, and his handsome bearing only added to his appeal. Having attained a cult status amongst his youthful and educated supporters, Imran needed to get the support of the common man as well, hence he resorted to religious catchphrases and started lecturing about “Riasat-e-Madina”. But in spite of being a celebrity in his own right as a cricketer, he now wanted to be recognized as a statesman on the world stage but, apart from the Central Asian countries, no one took him seriously. The Western world ignored him because the celebrity status in the Western world is compartmentalized according to the field in which such status is achieved and there is no mobility in the celebrity status grouping unlike social mobility, that is no one can cross from his own compartment to the other. Imran’s status was that of an entertainer/sportsman and the world leaders did not regard him as an equal. Of all things, this irked him the most. Ignored by the West, he planned a visit to Russia to gain recognition but, unfortunate for him, it turned out to be an ill-timed visit as it coincided with Russia’s incursion into Ukraine.

Because of his growing appeal amongst the masses Imran became an anathema for his opponents, the PML (N) and the PPP, whom he began hounding through NAB and other state machinery. Meanwhile, bolstered by his increasing popularity, Imran started vitriolic personal attacks on the opposition leaders, which increased the political temperature and thus presented them a do-or-die situation. For the opposition, they put aside their inherent revulsion for each other, got together and launched a campaign against Imran for which they found sufficient material because of the poor state of economy and rising prices of daily use items and joblessness of youth, through it was greatly attributable to the Covid-19 pandemic. The opposition then quietly worked on members of Imran’s party, which was a hotch potch of opportunists and sychophants and succeeded in breaking their ranks and then launched the No Confidence Motion in Parliament. Initially, Imran did not take the Motion seriously, not even when it was actually moved in the National Assembly, not realizing that it had to be voted upon eventually.

When the time came for voting, instead of dealing with it like a politician through evolving of a strategy of give and take, he went for the kill by relying on a conversation between some low ranking official of the foreign office in the USA and a Pakistan ambassador, which was transcribed by the ambassador. In his naivety, he declared it to be a conspiracy by the USA to have him removed. He alleged that the USA was in cahoots with the opposition for the sin of visiting Russia. Earlier, Imran had passed inexpedient remarks about Pakistan’s relationship with USA, which was apparently not looked upon favourably by the Establishment. Needless to say, the conspiracy theory brought dividends to Imran in as much it satiated his urge to be noticed on the world stage.

However, Imran went ahead with his plans to somehow thwart the No confidence Vote in the Assembly even if he had to use unconstitutional means to do so. The Judiciary did not take it too kindly and came out in support of constitutional provisions being followed to the letter. It was then that the Establishment came to the conclusion that Imran had gone too far and thus gave him, the now famous three options. Imran, instead of opting for one of these continued to flout the Constitution in order to prevent the No Confidence Vote from taking place. But the Judiciary stood firm and finally Imran was on the streets, trying to force a General Election which the crafty politicians of the opposition were in no mood to accede to.

Imran is now holding rallies. He is talking to huge crowds of his devotees of which there are many, hoping to force General Election without realizing that the crowds that he addresses, after hearing his speeches, go to their homes for a nice meal and start another day in the morning. They are not like the serfs of the feudals who are bound to do what they are told at the pain of ruination of their and their families lives. It is, therefore, doubtful if Imran will bring about a revolution through these supporters as he is aspiring to do, particularly in view of the Establishment’s reluctance to come to his assistances because of his increasingly abrasive rhetoric against the Establishment. They now probably feel more comfortable with the ruling parties, particularly because their earlier zest for easing tensions with India has been considerably mellowed because of the belligerence displayed by Imran towards India and the West.

However, even though it seems Imran will not be able to sustain his aggressive stance against the then opposition alliance and Establishment for very long and his sound and fury is bound to subside as time goes by and his funds will deplete. He will lose steam and, not being part of the political oligarchies of Pakistan, he will ultimately find himself in the doldrums as his present day supporters would eventually distance themselves from him when they do not see any material advantage in continuing to support him. Moreover the brewing “Toshakhana” scandal and looming decision in the foreign funding case against PTI would start taking its toll on his incorruptible persona, so carefully cultivated. What he will still leave behind is that in future the unscrupulous politicians of Pakistan will not be able to fill their coffers from state funds and thus level of corruption amongst the politicians in future will be reduced to a great extent. Should this happen the saga of Imran will not have been in vain and his legacy will live on long after he has departed from the political landscape. A fitting epitaph to Imran’s short-lived regime would be that never before did a man come to political office with such a great deal of goodwill yet squandered it so quickly because of his arrogance, exaggerated sense of importance and a massive ego and his obsession for being accepted on the world stage as a statesman. It can be safely said that in spite of his many failings, Imran’s legacy will live long after he has departed.

The writer is a former Judge of the Sindh High Court. He has been actively involved in human and women’s rights causes.