Come next general elections, Pakistan is headed towards another era of confusion. 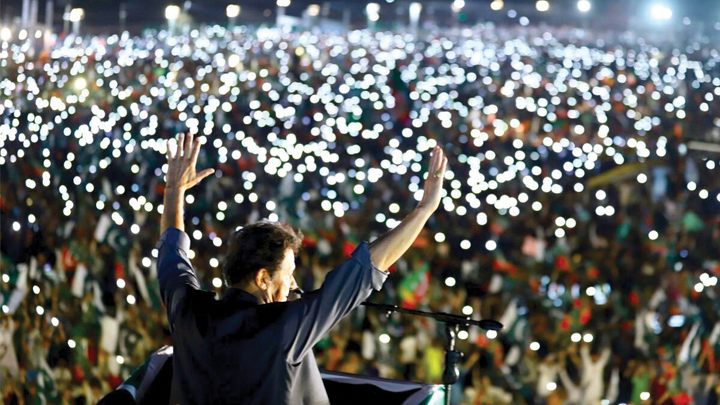 The political drama that the Pakistani nation and, indeed, international onlookers saw unfold during the first week of April was entertaining and finger biting for some, and humiliating and worrisome for many others. The manner in which former Prime Minister Imran Khan resisted all forces to remove him from office was evidence of his resilience and goal orientation on the one hand, and arrogance, lack of strategic depth and inability to politically compromise on the other. He hung on, by a weak and worn thread, even as institutions and people around him were adamant to cut it. And they did.

The style of Khan’s removal from premiership aside, his relatively low-key detractors now have a field day in dissecting his stint as the leader of the country and his future. Newspapers and television channels suddenly beam news and talk shows of inefficiency and corruption of his government. The massive and willing turnout of people of all ages and backgrounds in Khan’s rallies in cities as well as his criticism on his ouster deserves barely a mention: reluctant and sarcastic. Commentaries on “Lettergate”, overshadowed by the Toshakhana case cast doubts on the existence of any letter at all. Op-ed writers are churning out piece after piece in which many suggested that the Imran Khan phenomenon was here to stay.

One favourite aspect of the ongoing analysis is whether Imran Khan is leading a cult with a following that buys into his rhetoric laced with defiance - this towards the very forces that are said to have brought him to power. The other possibility is that this is a continuum that can bring about a sea change in the mock democracy games this country has been cursed with. The majority of scribes and commentators lean towards the former view. Khan’s supporters are young and from the elite overseas Pakistanis who were carried away by their dream of an Islamic hero, they say dismissively.

At present, however, Khan seems to be pulling crowds across the country almost as if this was an endogenous movement likely to sustain itself. Given Khan’s tenacity and capacity to hammer at the same target (despite the U-turns when in power), he might just transform at least part of his so called populist, religio-patriotic slogans into political ones that recognise economic needs but question their relative importance. Pakistani voters, always with strong, nationalist leanings, can sway easily from concern for day to day survival needs to a call to their national spirit: remember Bhutto’s famous statement: “We shall eat grass, but will get our own atom bomb; we have no choice.” The same strategy applies here. The limited cult groups could expand, from only patriotic and religious-minded individuals to a vast populations willing to forget Khan’s red underlined report card in governance and economy while the educated ones as well as the forceful women will likely gloss over his misogynistic statements and will respond to his calls for self-respect and autonomy. The regressive and dangerous TLP might just tilt over as an ally and could be JUI’s answer in Khan’s support camp (although accepting TLP would be a gross mistake). They could also act as a pressure group that can bring those sitting on the fence to his side. 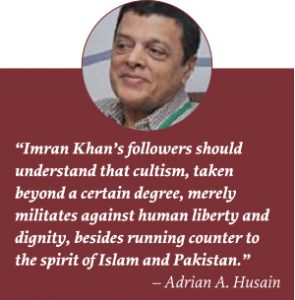 Elections in this country have never been democratic and fair. There is little reason to believe that they will be any different next time; in fact, quite the opposite. Institutional forces and those that cannot be named as well as the erstwhile opposition will continue to join hands to prevent Khan from gaining power for the second time. Despite the rotting core, they are still too strongly built to respond to calls for change. With implicit help from vested interests outside the country, the plan could very well succeed. However, Imran Khan and his signature defiant stance, the conspiracy narrative being only one example, may find a clear and strong resonance with the Pakistani public both in the short and long term. There is a continuous demand from an as yet a small group of individuals for accountability of the judiciary and military and this may not be suppressed easily, although it is at present brushed aside and branded as a smear campaign. The patience and energy of the deep state and additionally, the loyalty of the new alliance (that has suddenly switched sides from the anti- to pro- establishment) to each other will be sorely tested. Such an intense process, divisive it may be, will likely leave traction marks for change to happen in areas considered to be sacrosanct until now.

It might be reasonable to assume that two casualties of this episode and follow up events have been the judiciary and the military. Both find themselves now in positions of defending themselves to the public through almost apologetic clarifications. People have been using the social media extensively to express their concerns. Questions are being asked and there seems to be a better aware populace out there. It is still too early to assess how the larger population, identified by the common, read illiterate and poor man will respond.

Imran Khan’s greatest challenge will be to create a sense of direction and channel the oodles of energy of his supporters, from the chaotic but emotional and nationalist sloganeering into a way ahead for them to resist and sustain. The plus three years he has had as head of the country should have taught him lessons in judging the mood of the people; the pressure points of his opponents; the extent to which he can push them; his options and responses of his electorate. In particular, he must also understand that optics matter and he must therefore strike a balance between what he does and how he does it. PTI’s strength is also that it is the only party now with a national influence and base and Khan should be able to use this to deepen the PTI’s presence.

A relevant question tht must be asked is whether the current alliance of motley political groups that has been culled together with the glue of resentment and sheer hatred of the man will last until elections and possibly beyond. A few days into power and fault lines are already beginning to emerge among the allies. There are parties that have always changed royalties to gain ministerial as well as constitutional posts and their activities are well known. Some play religious, biradri and ethnic cards and others are armed with mafia tactics. BNP and PPP present themselves as liberal but their performance in respective provinces has been abysmal. JUI is squarely anti women and religiously repressive but has had a long term nuisance value for all governments. N League has its power base in central Punjab and this is where it will fight out the next bid for power.

Paradoxical it might be, but chaos can give rise to coherence and consistency, provided it is well-orchestrated, sustained at high energy levels, absorbs shocks and is ultimately meaningful for the people. For too long, the country has been stagnant and its lifelines have been gnawed away.

The writer is a development professional, researcher, translator and columnist with an interest in religion and socio-political issues. She can be reached at nikhat_sattar@yahoo.com