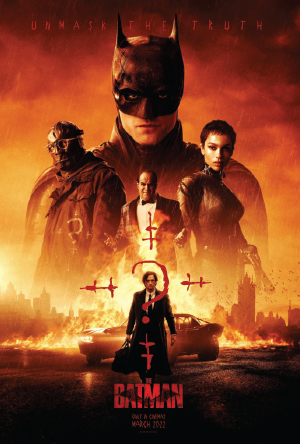 ‘Fear is toll, when it lights up the sky, It’s not just a call, It’s a warning.’

Conquer your fears, lies at the heart of the film. Do not let your fears rule you! Face them!

The Batman is an American Marvel superhero film. Directed by Matt Reeves, it falls in the genre of superhero and crime thriller.

The film is set in Gotham city - a place of crime and violence, made of stone. It is like a dead city. No life flourishes here. It is a city without a soul, evil and wicked.

The plot revolves around Batman (Robert Patterson) alias for Bruce Wayne, the saviour of mankind. He promises vengeance for his parents who were murdered in a ‘vendetta tempered with the ideal of justice.’

The family feud is between the Waynes and Arkanas, both a part of Gotham.

As Riddler (Paul Dano), a serial killer, is let loose in the city, he starts killing significant political authorities. Batman is then forced to investigate the city’s hidden corruption and clear the charges about his family’s involvement.

When the Mayor is killed, Batman and his allies set on a mission to hunt the murderer! Alfred (Andy Serkis) and Annika (Hana Hrzic) are on Batman’s team. Annika too is seeking revenge from her father who strangled her mother when she was only 7 years old. Both Batman and Annika are united in their motive for revenge of the unfair treatment of their families. Alfred is Batman’s butler, friend and confidant, who provides comic relief to the audience after a frenzy of tumultuous and turbulent scenes. His witty lines and sarcastic humour help Batman to go forward in times of distress.

As Annika steps into the underworld, in quest of her culprit father, she has to play slick to underpin her father! Batman helps her by giving her a pair of bionic lenses in order to reach her father.

Batman and Riddler are pitched against each other in a battle to get justice. Riddler ties a bomb to an innocent person and asks him to answer the riddles, the price he will have to pay to spare his life.

‘If you are justice, please don’t lie.’

Riddler makes a mockery out of justice in the first phrase. His idea of justice is perverted. And when the victim gets the last answer wrong, he mercilessly detonates the bomb!
Batman through the course of the film, points to an important facet of life, that of the importance of truth.

Because it is only truth, which will set Gotham free of the spell of sorcerers.

The police and the FBI try to reach the person behind the Mayor’s murder, but it is difficult to identify him because he has a dual identity.

Will the police be successful in catching the perpetrator of crime or will Batman have to intervene to get to the criminal?

Riddler plants a bomb in the city but as the bomb explodes, the wind blows in, bringing with it water and extinguishing the fire.

Riddle is finally unmasked. Who is Riddle? Watch the film to find out!

It is at this point that the false promises of renewal of the politicians made at the beginning of the film are finally exposed.

Gotham is finally freed. Fire and water the, two elements of life, restore order once again to the city of Gotham. “We must rebuild people’s faith in our institutions and leadership. Together we will rebuild.’

With Batman having accomplished his goal, Annika wishes him to join her as her soul mate but Batman refuses. He has still more to do.
Will Annika and Batman unite? Will there be a sequel?