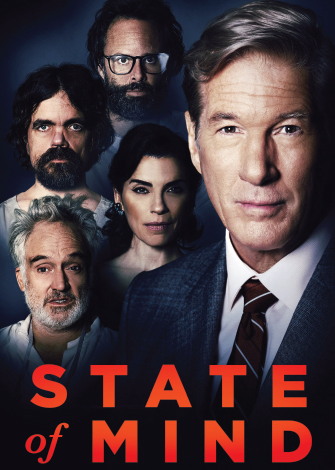 State of Mind or Three Christs is a dramatic film based on real life events from the 1960s field of psychology and psychiatry. The film sets the tone right from the beginning by introducing great lead actors playing dramatic roles and doing justice to them. Richard Gere plays a very energetic, charming and ambitious Dr. Stone. Julianna Margulies entwines a beautiful chemistry with Gere by playing the role of his wife and a chemistry teacher. Their relationship helps the audience witness Dr. Stone as a psychiatrist and an ordinary man, side by side.

The aura surrounding the film, with three mentally unstable characters, leads the audience into a whirlwind of reality and hyper-reality. The plot revolves around Dr. Stone and his ground-breaking experiments with his patients at a mental hospital. He introduces therapy sessions which are seen as non-clinical and hence, non-performative. His techniques are not accepted without hesitance. The troubles he has to undergo in order to stand his ground and the results he achieves, keeps the audience anticipating a productive ending. His assistant, Becky, who is vulnerable and eager, is nearly sucked into the paranoid vacuum but saved by Dr. Stone’s guidance. The myriad of emotions felt by the characters are portrayed beautifully through the script.

The plot is deeply entrenched in the traditional psychological workings of the early 1900s and a huge question mark is put on the practices performed within the confines of the mental hospital. What goes inside is traumatic, depressing and inhumane. Their paranoia is increased when electric shocks are given, paradoxically, to control their paranoid behaviour. The film captures the emotions beautifully and you not only sympathize with the characters, but start empathizing, finding a mirror of your own existential dilemmas in schizophrenic patients. The very first dialogue of the film sets an ominous tone where a confession is being made, “I, Dr. Alan Stone, am guilty of underestimating the enigma that is the mind…”
There is a captivating interplay of hope and hopelessness while watching the lives of the mentally ill. It keeps you hooked throughout. Peter Dinklage, Walton Goggins and Bradley Whitford do justice to the roles they play. They appear vulnerable, delusional and stuck in a parallel world of illusions. The script takes the two narratives of the sane and insane, the real and the illusionary perfectly well together. Dr. Stone’s personal relationship with his family is presented differently and his relationship with his patients is of a different nature. His daughters and wife add a personal touch to the character and how it is affected because of his ambitious career.

There is an ironical sense of humour that prevails over the film. The delusional actions make the audience enjoy the innocence of these characters. But at the end of the day, we start questioning if the insane are really the mad ones, or they are being stupefied into madness through inhumane psychiatric practices. The drama unfolds through the technique of flashbacks where Dr. Stone is narrating his experiences and recording tapes for research notes. His story is definitely one to be told and makes history, the ending giving a sense of closure and completion to the whole dramatic narration.

Although at one point in the film, it starts feeling a bit dragged and monotonous, but it pulls itself back on track with eventful incidents, breaking the lethargic monotony. If you are interested in films based on real life events, full of drama and ground-breaking accounts, then State of Mind is just the film you need to watch. It will help you understand the mechanisms of human behaviour, and as a bonus, you can appreciate how appealing Richard Gere still looks.